After my French Pete Creek hike in November, I did do another short hike of 2.8 miles, but it was nothing to note. It was a local trail, covered in gravel and as wide as a road, up a local mountain. I didn’t get any good pictures and it wasn’t much of an outing, so I haven’t bothered to document it here. Then the holiday season came along, and I got really busy, so I didn’t get a chance to get out in December.

Now that 2014 is here, however, it is time to get back into gear and get some miles done. Because most of the trails are at higher elevation and under snow right now, I have to be a bit creative to get in a good hike in the winter. This time, I loaded my gear, my wife, and one of my adult daughters into the car and we headed north to the Columbia River Gorge:

Once there we followed the Historic Columbia River Highway to Horsetail Falls. This is just a bit to the east of the famous Multnomah Falls (which just the other day suffered damage to the picturesque Benson Footbridge you see in pictures crossing the lower cascade). We hiked up the Horsetail Falls Trail (#438), then took the Gorge Trail (#400) west to Ponytail Falls (also known as Upper Horsetail Falls): 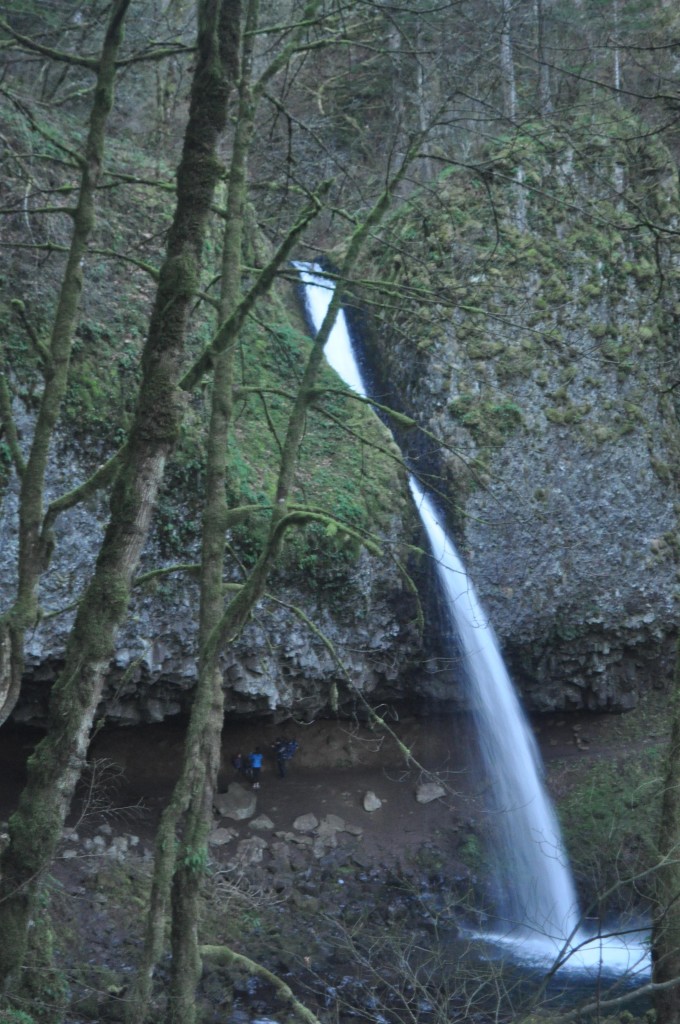 As you can see, we were not alone. In fact, we probably saw 50 people on the trail, though most were near the beginning. But even in January, on a day where the temps were in the 30s and frost was everywhere, this trail was busy. It probably has something to do with nearby Multnomah Falls being the most popular natural feature in the state. The trails in this area are pretty much always busy.

You might also notice the trail runs behind the falls. That is because the upper layer is a lava flow (they are everywhere in western Oregon) and the lava does not erode nearly as quickly as the soil and rock underneath. So the waterfall has been undercut. Here is a picture taken from the trail as it curves behind Ponytail falls, looking out toward the Gorge: 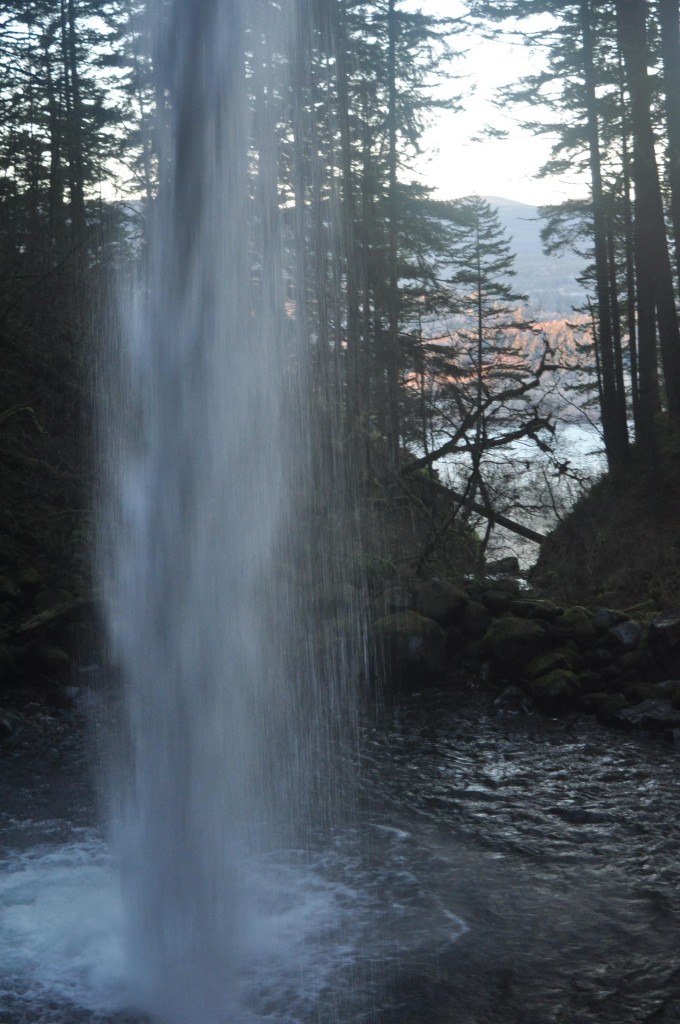 Here are a couple of ‘atmosphere’ shots, so you can see what the trail is like. All the trails run along steep slopes here: 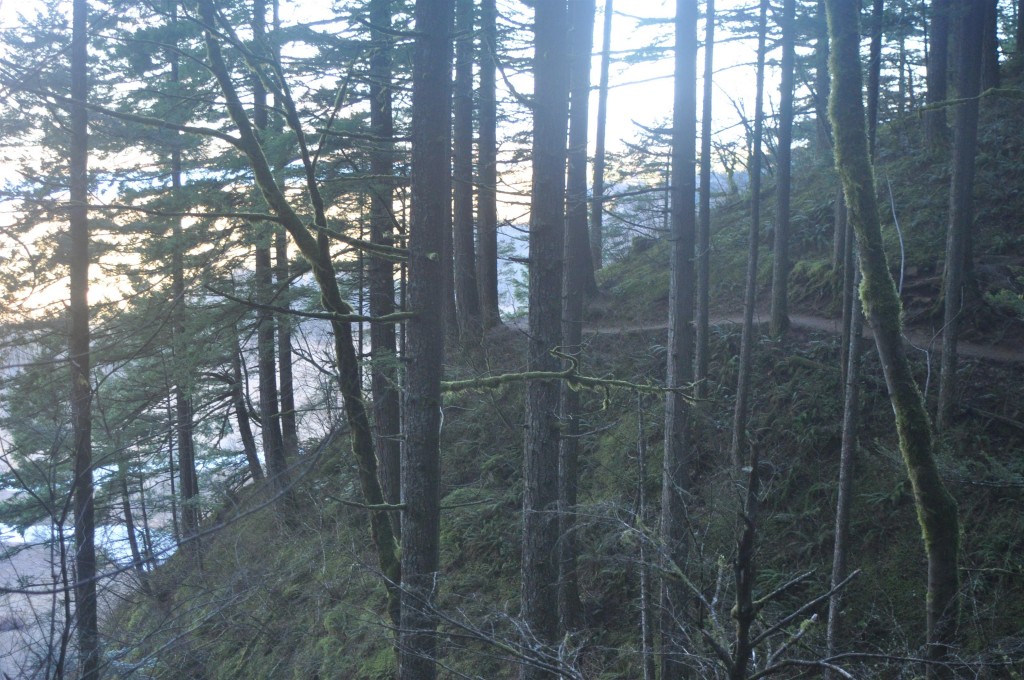 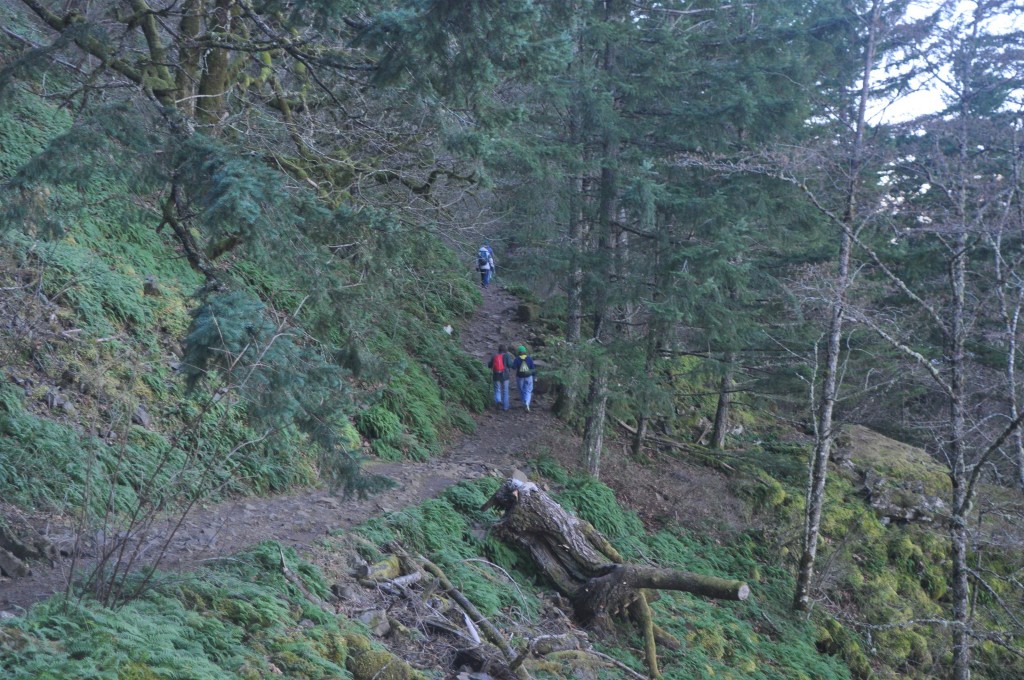 Whenever the trees opened up enough, I tried to get pictures of the Gorge itself. It’s hard to capture in an image. It’s absolutely stunning in person: 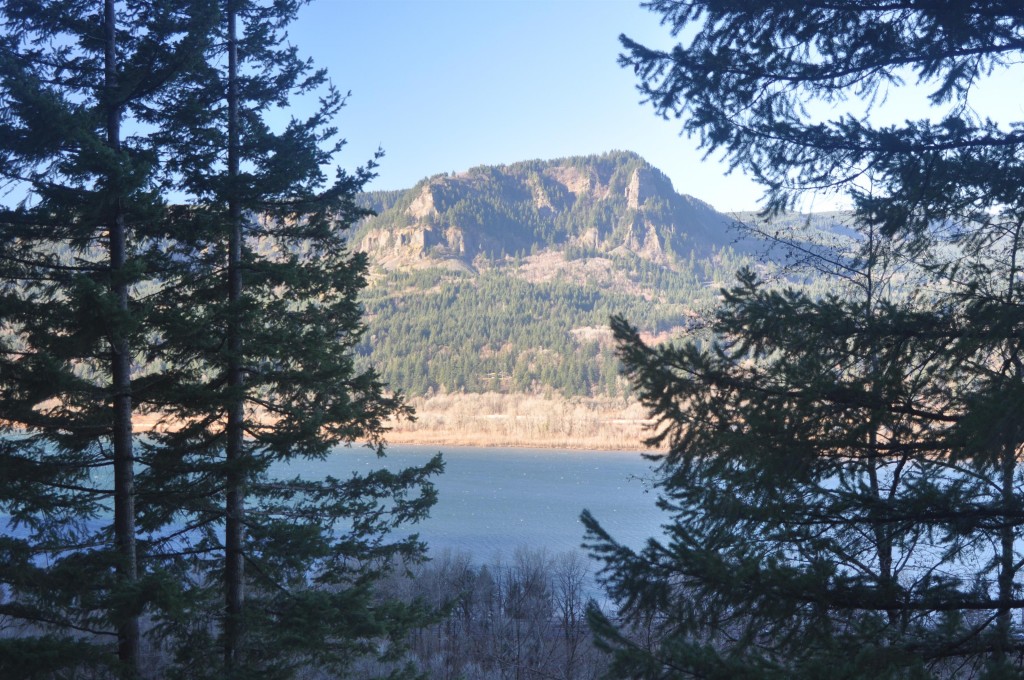 It adds perspective to note that most of the trees on top of that cliff over there are probably more than 100′ tall. Those are Douglas firs, and this is a great place for them to thrive. Everyone has heard of how big the Redwood gets, but the Douglas fir is the second tallest conifer in the world. In old growth stands they are commonly 200-250′ tall and 4.5-6.5′ in diameter. They have been recorded as tall as 380′ and as big as 15′ in diameter. Un-molested and in a good spot, they usually live to be 500 years old and some last 1,000 years.

Those trees. Looking like carpet right over there on that cliff: 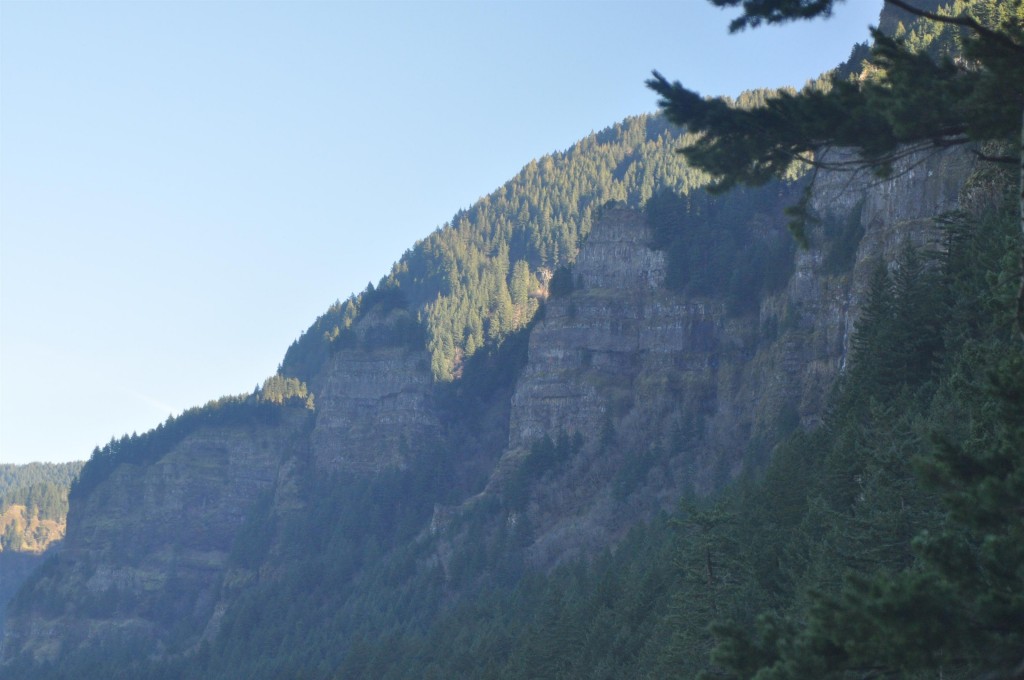 Moss covers everything, and at this time of year there is water everywhere. In this picture, what looks like slender icicles is actually running water, flowing through and off of the moss and lichens: 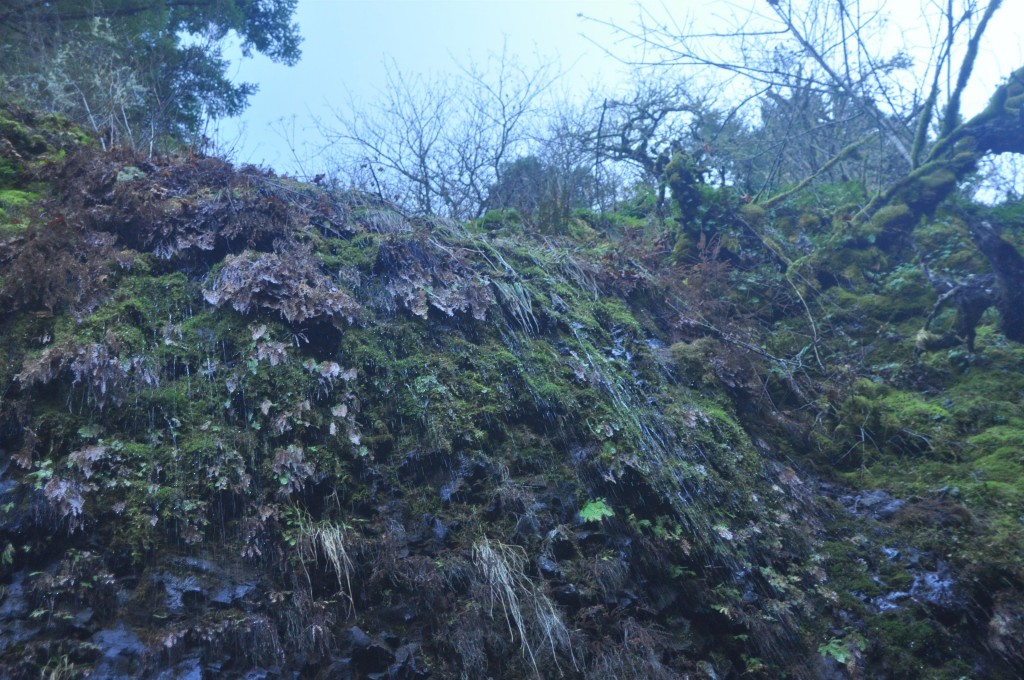 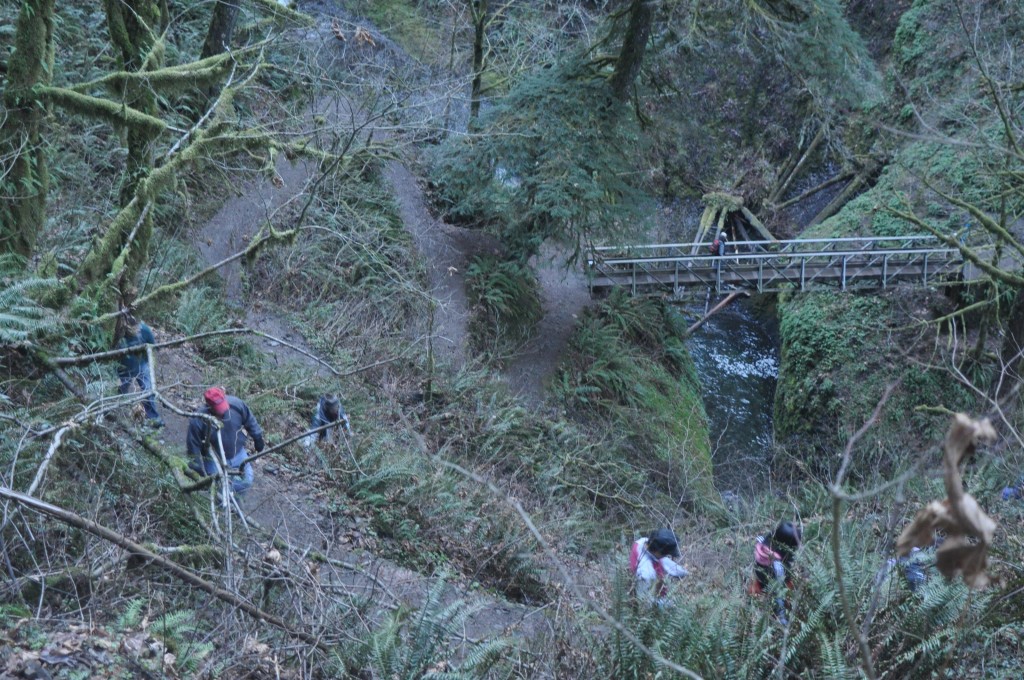 We then continued along the trail to the Oneonta Trail (#424). Right before the junction is a bridge that crosses Oneonta Gorge: 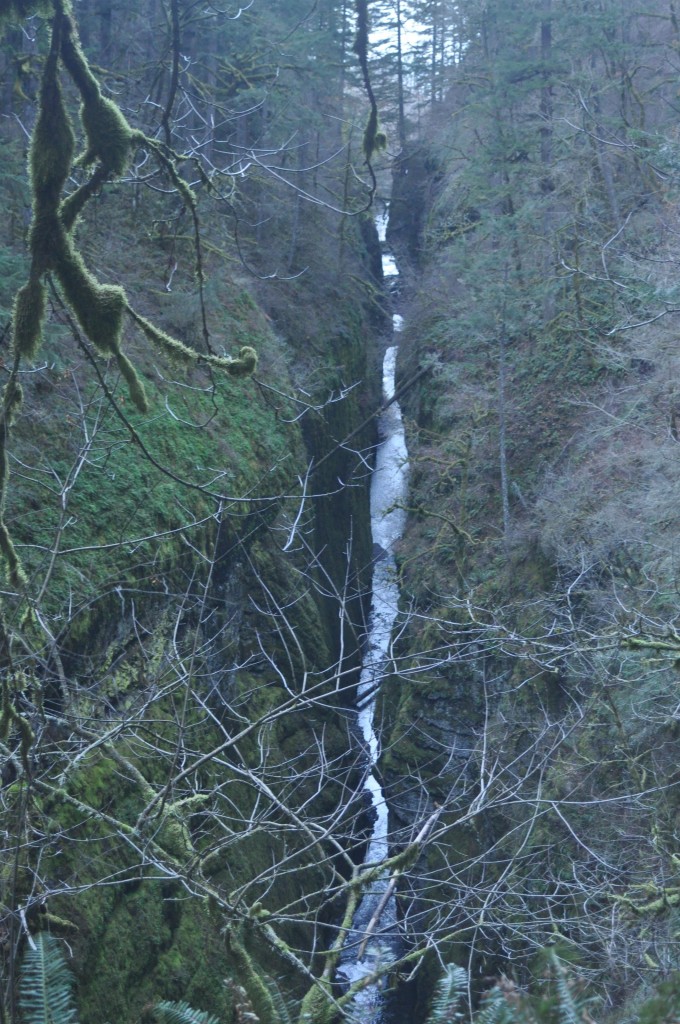 This narrow gorge is popular in the summer, because you can wade upstream through the narrow crack in the moss-covered basalt rock to a fantastic little swimming hole. I tried to capture the way it looks from the bridge, but it didn’t come out well. You can’t really tell that the walls are about 80′ high, and what looks like whitewater in the bottom is really just reasonably calm water reflecting a lot of light. Oh, well. I tried. Even with my more sophisticated Nikon D90 my pictures still show what an amateur photographer I am: 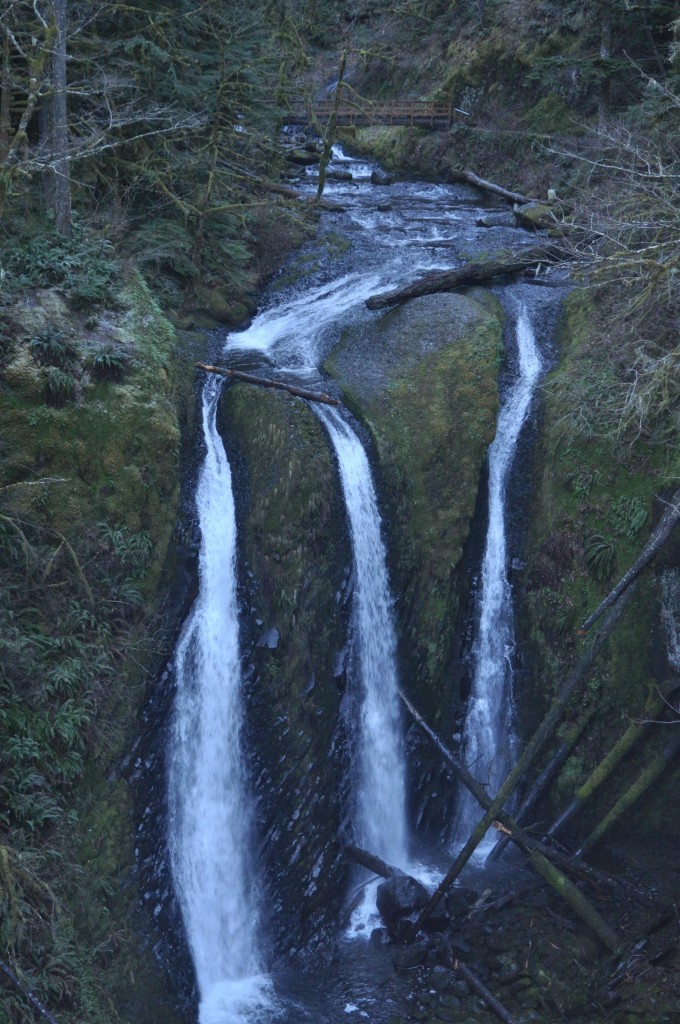 Once we reached the Oneonta Trail, we followed it south, uphill and away from the Columbia River. After a good bit of climbing, we finally reached Triple Falls: 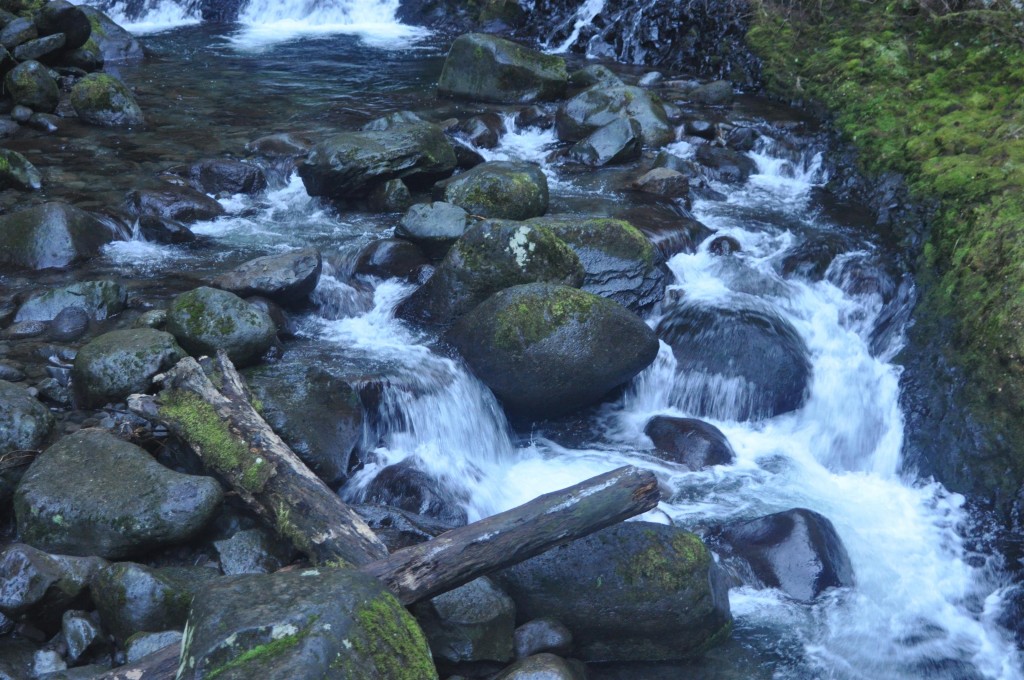 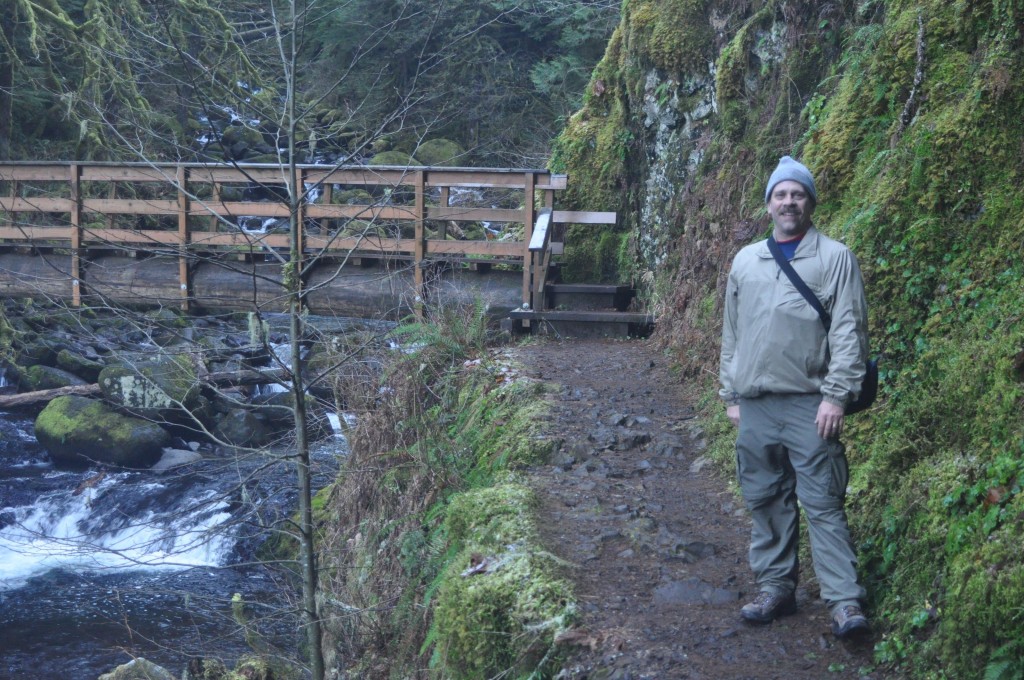 Just above Triple Falls is a log-style bridge over the creek: 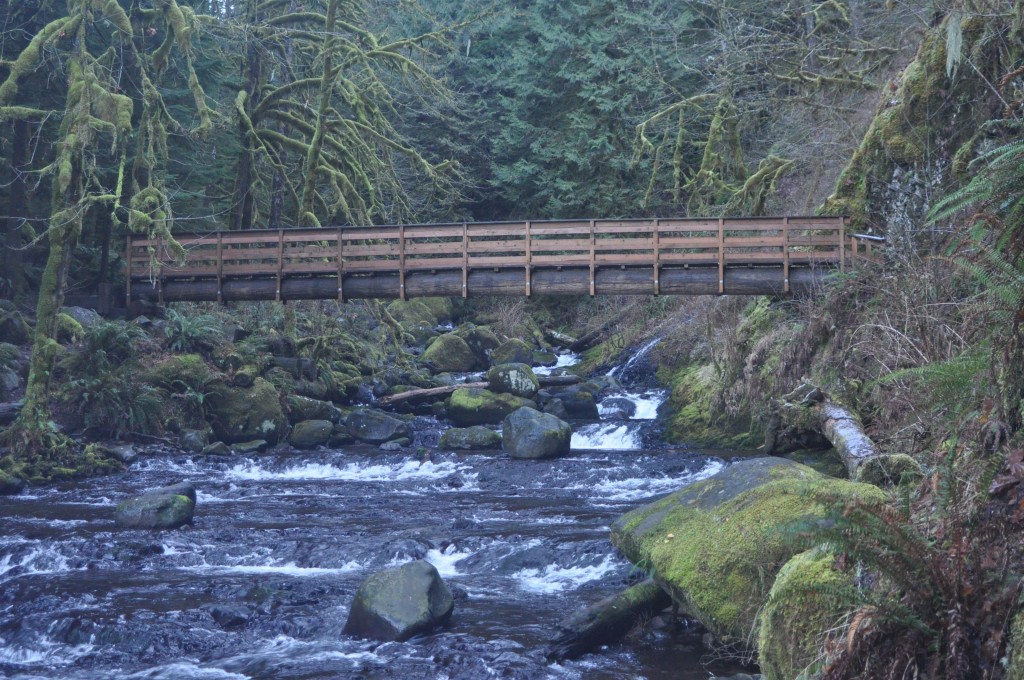 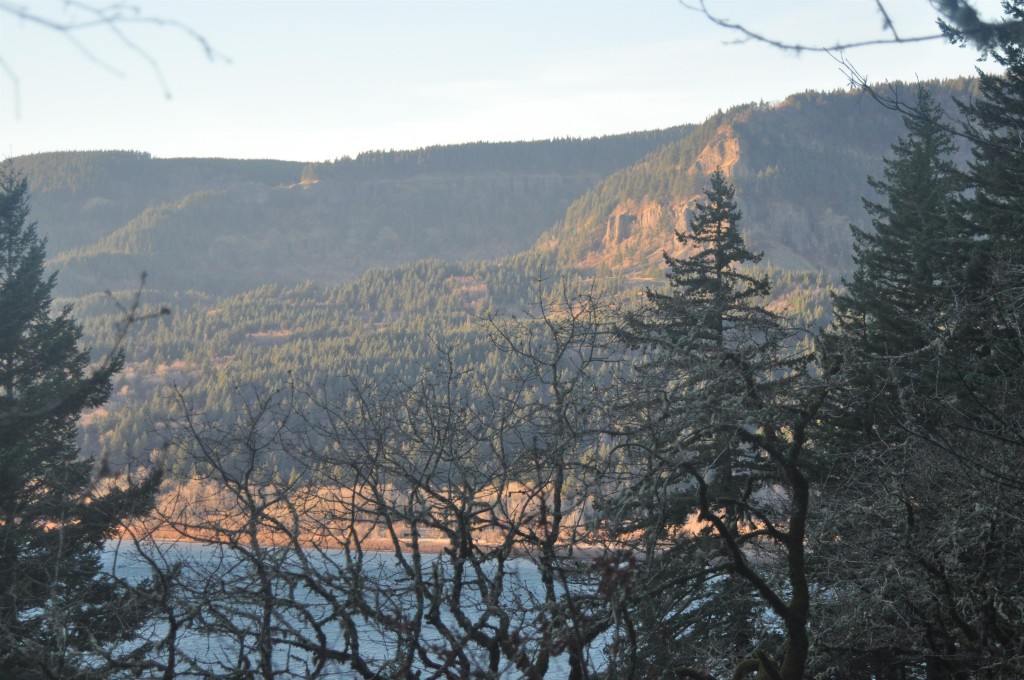 On the far side of the bridge is a nice camping area, and the trail contines on for some distance. This was our turnaround point however. We simply headed back the same way we came for a total of just over 5 miles.

This next picture shows the view from a ledge near where a teenager once fell to his death and is memorialised by a plaque. Of course, I had to walk out close to the edge. It’s pretty much straight down from here to the flats below along the edge of the river: 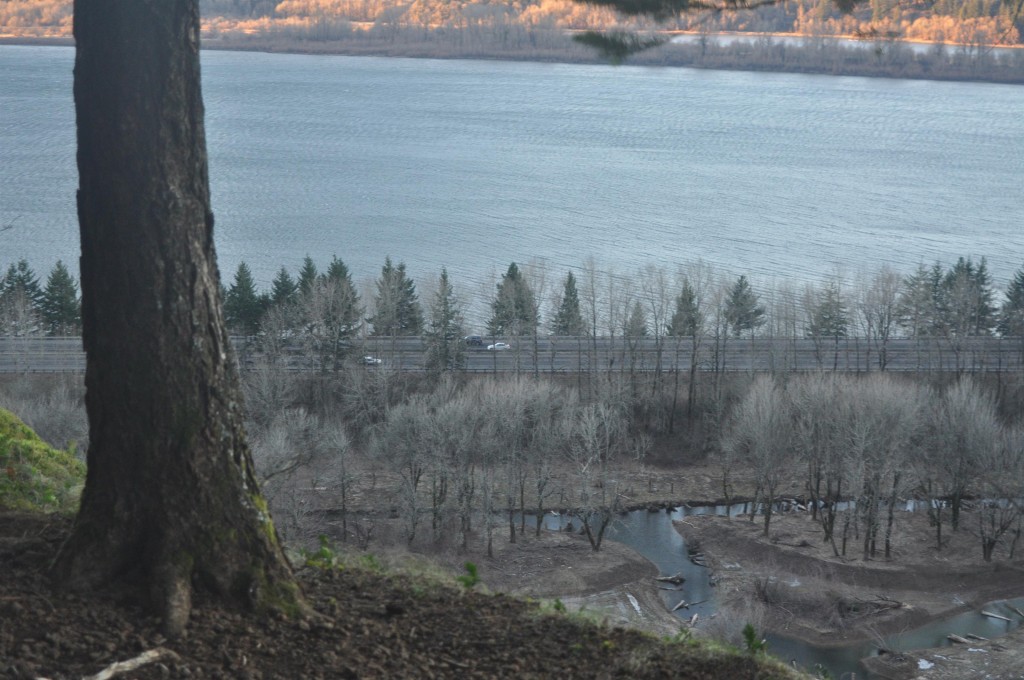 As we walked out, I noticed that the light had changed. With the late afternoon sun, the light was less the cold blue of earlier and more of a warm reddish, so I couldn’t pass up the chance to take more pictures: 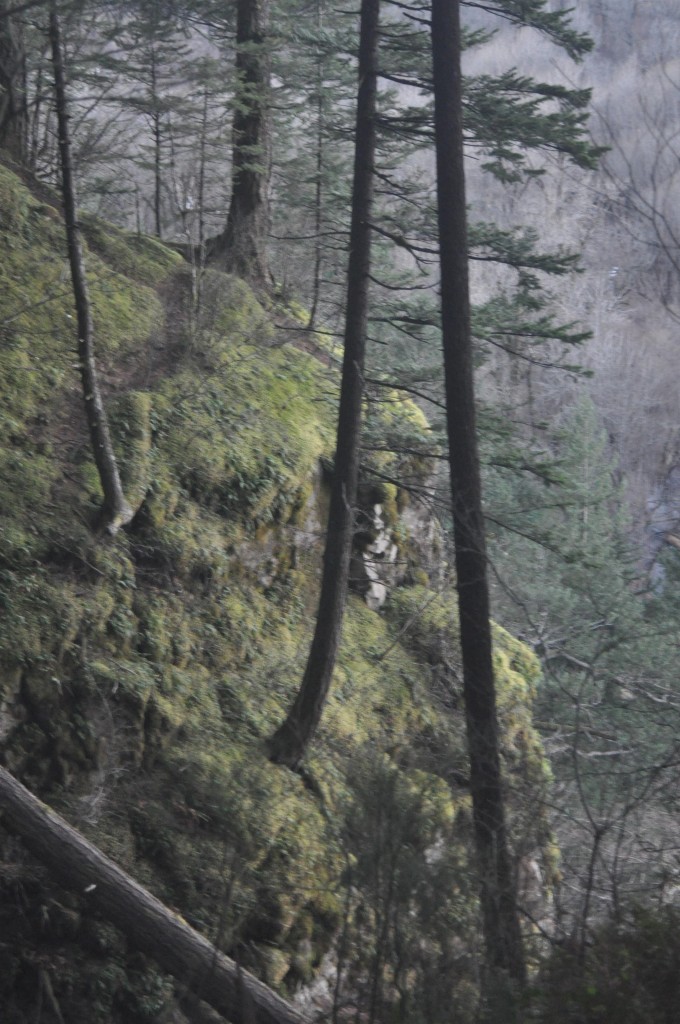 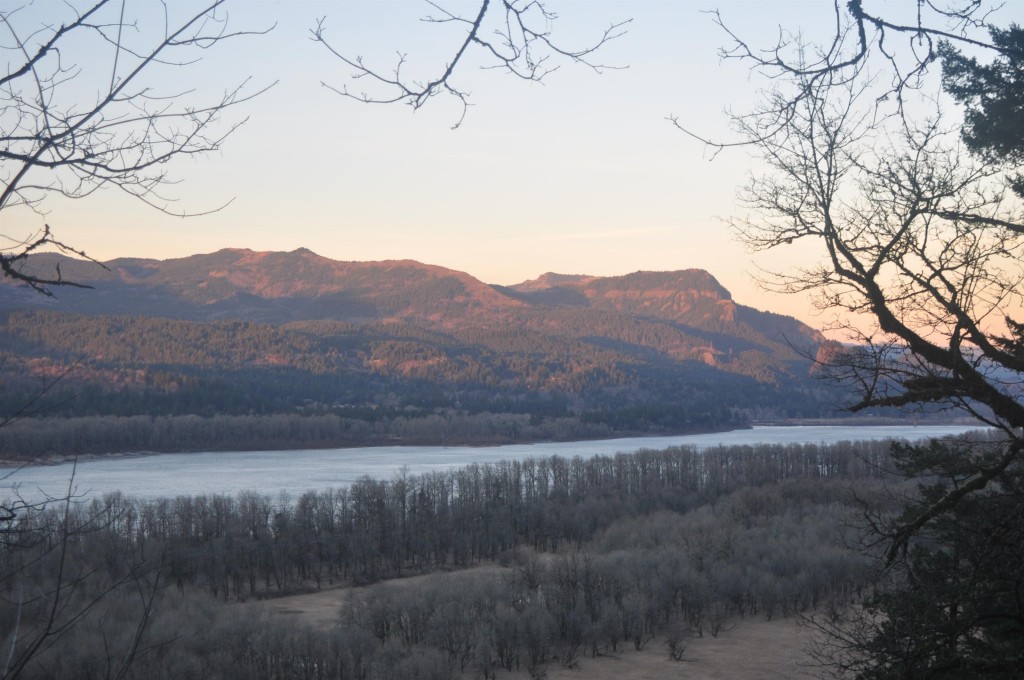 Here is a KMZ file of my track. It’s pretty messy: the GPS was in my pocket, there were a lot of switchbacks and verticality, and it couldn’t see many satellites. As a result, the coordinates it recorded frequently weren’t very accurate. Oh well.

In a state where a lot of people like to get out into the woods year-round, it can be hard to get any solitude in the winter when there are far fewer trails open.

The Lowa Renegade GTX boots I have been breaking in are pretty hard on my feet. I’ve tried different lacing techniques, but I still have hot spots on my big toes and a painful area on the top of my foot. The boots are pretty well broken in, but they aren’t getting any better. I need to go back to REI and see what they suggest. In addition, I’m thinking I’ll likely want some beefy trail runners instead for the long hike in August. These are good winter boots, but would be no good in the summer.

When the GPS in the car says turn, just do it. That way you won’t need to drive an extra 30 minutes just to get to the restaurant on the way home.