This final set of images are of the trail itself. I thought it might be interesting to share the state of this trail (and right now, probably most trails in Western Oregon).

Some sections of the trail were pretty nice, with some rock and other debris, but firm and reasonably dry: 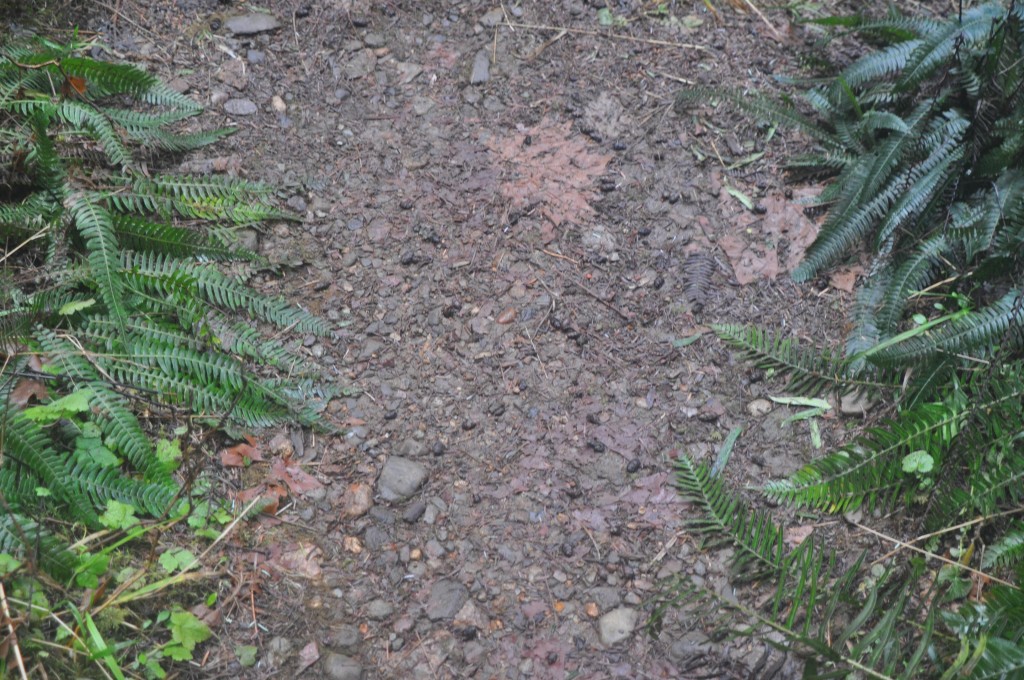 More common were sections of trail that are slightly muddy or covered in leaves. In fact, most of the trail was like this. It’s not bad to walk on, but it’s pretty slick, so you do have to watch your step on any sloping sections: 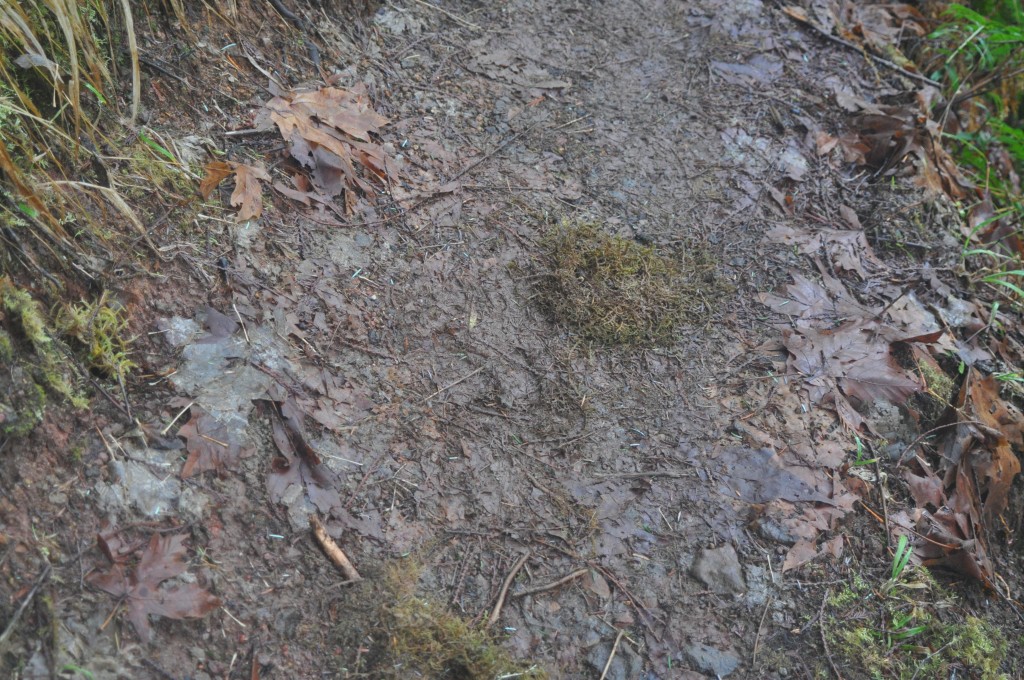 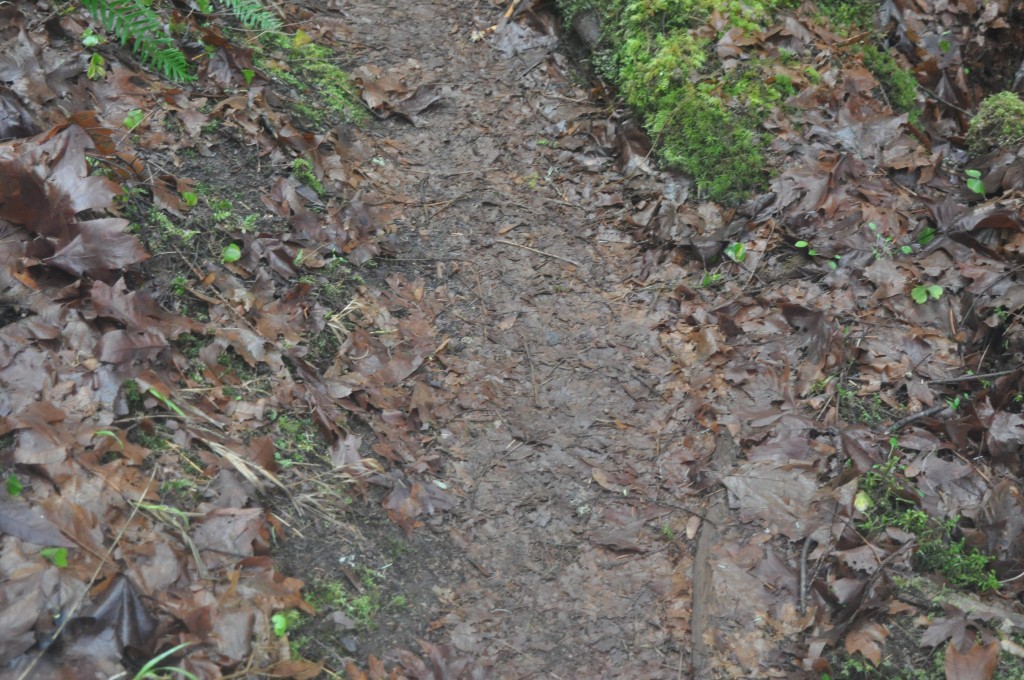 Some areas were just muddy and were a fall waiting to happen. I went down twice on this trip: once to a knee, and once onto my butt. Messy, messy. And in sections with a drop-off along one side of the trail, it can be a little risky too: 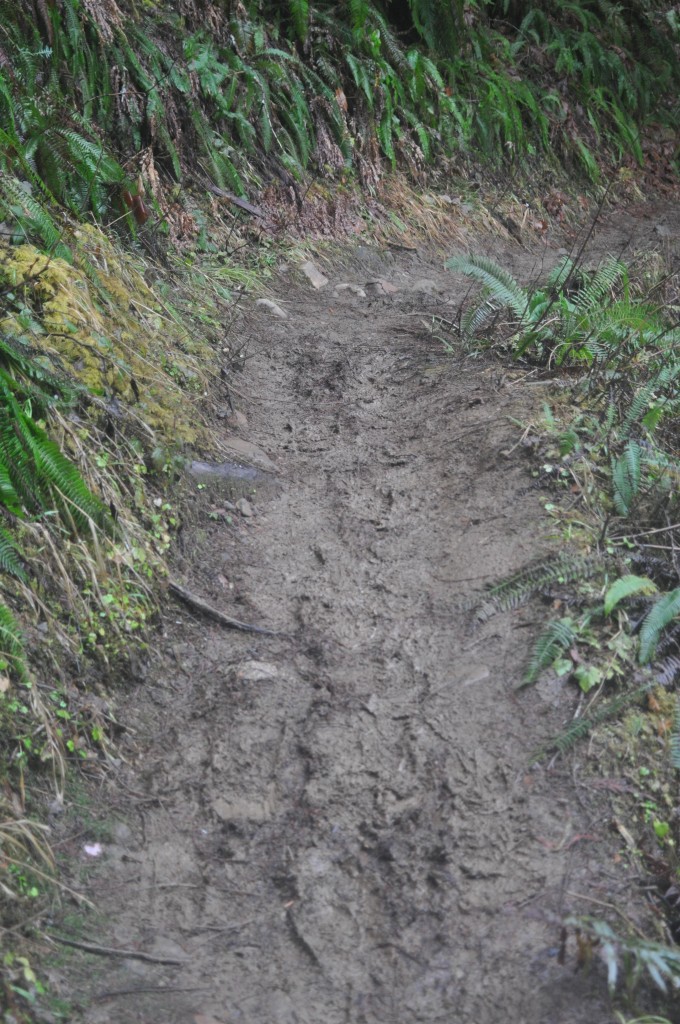 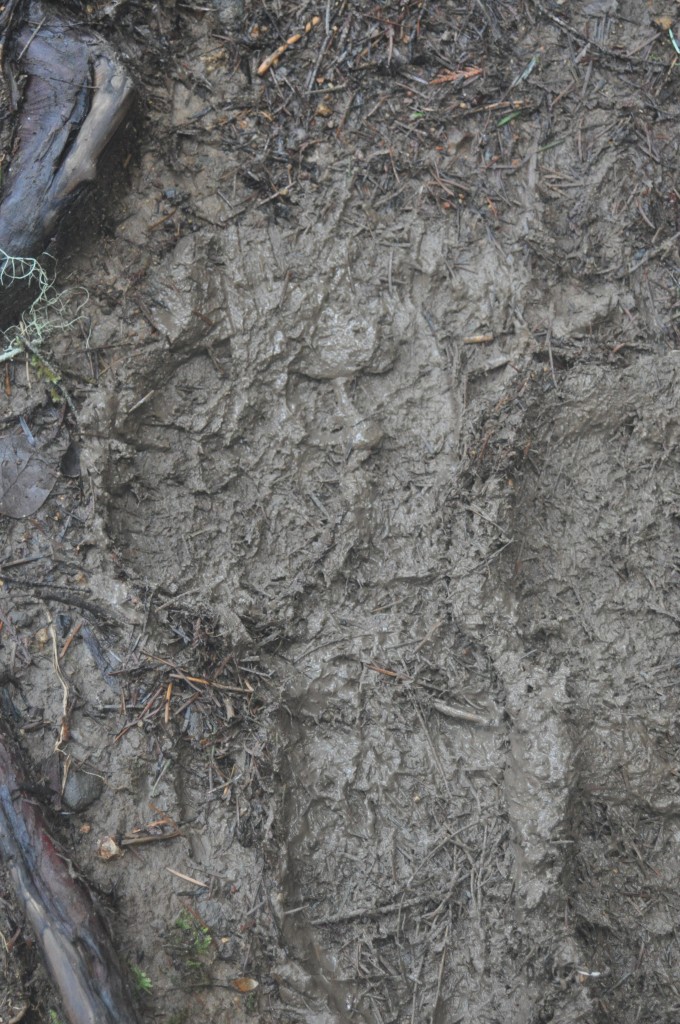 One section was low and swampy, so small logs were laid on either side of the trail and the space between filled in. This allows most of the moisture to drain out of the raised bed and makes for a nice trail to walk on: 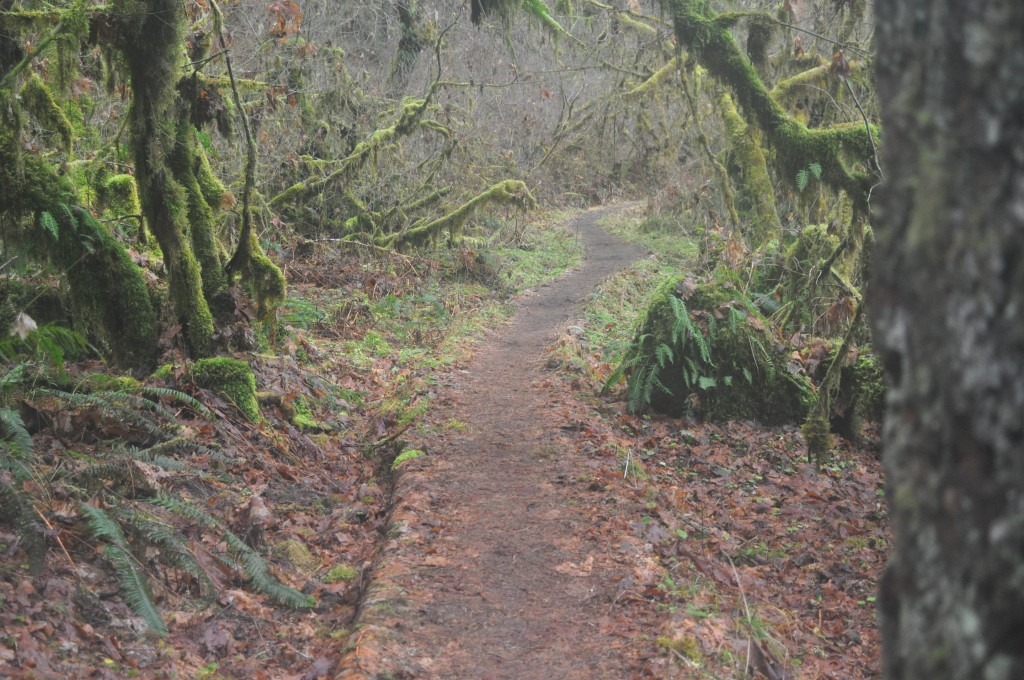 There were several washouts, as is normal for any trail that crosses a steep slope in this area. The following picture shows a washout in progress. The area I outlined in red is about 6-8 inches lower than what is left of the trail on the right, and you can see where mud has been slowly flowing off the left edge of the trail by the way it is slowly burying the plants growing there: 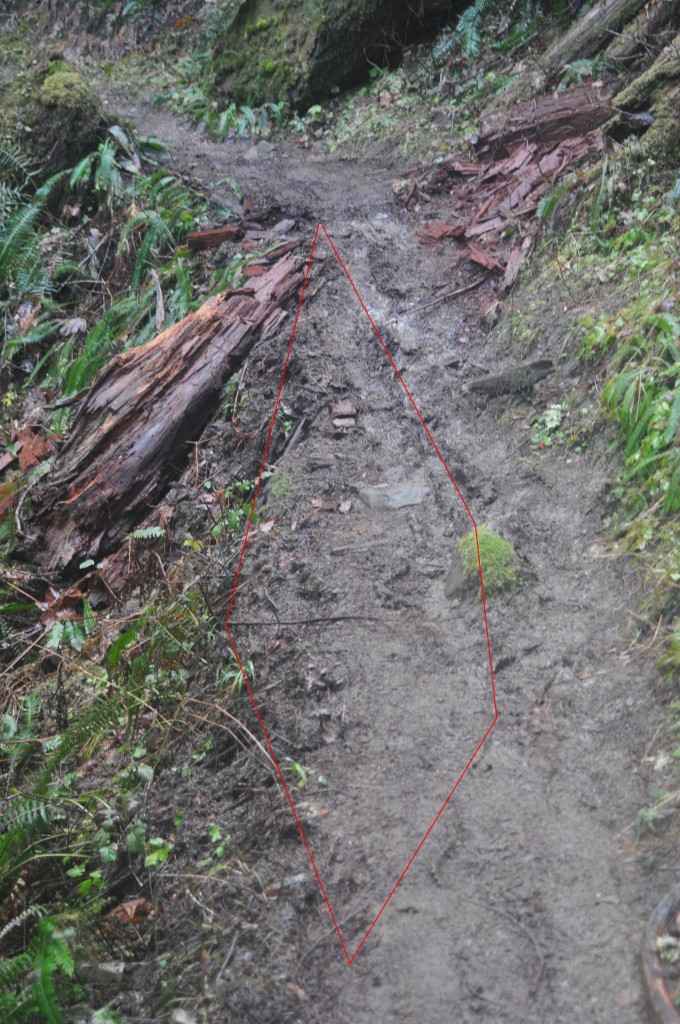 Partial washouts like this tend to be very slippery and will carry you over the side if you aren’t careful. And because it is poor etiquette towalk off-trail, or even walk on the foliage at the edge of the trail, a responsible hiker has to stick to the mud and go slow.

This next image shows an older washout that looks like it has stabilized where it is. The outlined section is about 1 foot lower than the high side of the trail to the left. It is likely the rocky nature of the trail at this point that has slowed or stopped this washout from progressing further: 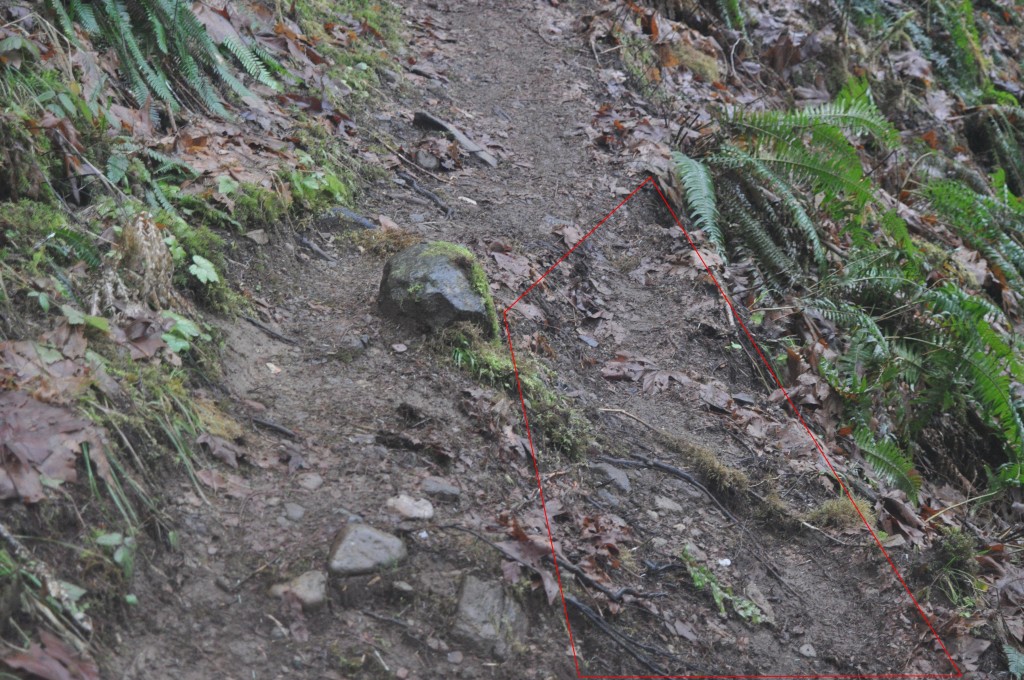 Finally, when a section of trail is very prone to washout and there is no practical way to re-route the trail, a retaining wall is sometimes built. However, these are rare, because it takes a lot of energy and time to carry the timber in and build the wall. Remember, even the people who maintain these trails aren’t permitted to use wheels. So no wheelbarrows, no carts, and no easy way to carry heavy objects. These were carried in about 2 miles on someone’s shoulder. That’s a lot of work. But sometimes, it makes all the difference: 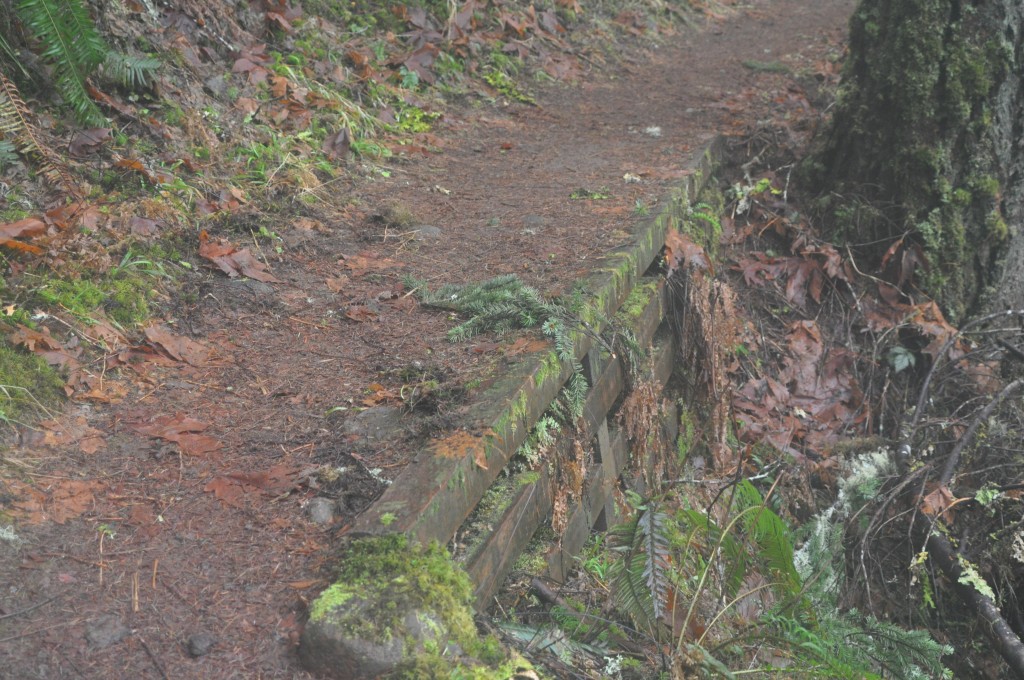 I haven’t picked a spot for my next hike. The coldest part of winter is past, but the snow at higher elevations will linger until July. I need to find a hike that runs longer than the ones I have been on lately, but low elevation trails tend to be shorter. I’ll keep combing the maps.