The day finally arrived. On July 29th, my brother Jody and I headed for McKenzie Pass. We were given a ride by a friend and dropped off at the Dee Wright Observatory on Hwy 242. Our plan was to hike south on the PCT to Elk Lake Resort, where Jody would have to bow out for a couple days. I would hike on and Jody would rejoin me for that last few days of hiking. I expected to be out for 8 days, with a zero day in the middle. 75+ miles of trail lay before us, waiting to be walked. Here we were, ready to roll, with the observatory behind us: 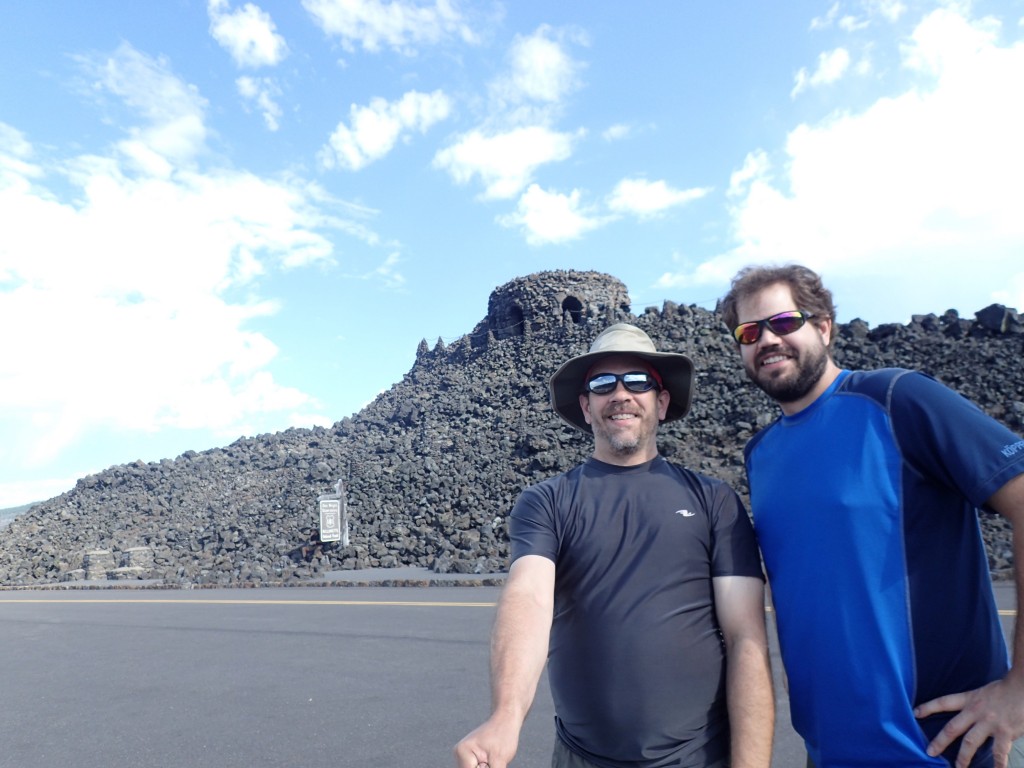 The first 30 miles of this hike are definitely the most scenic. Hiking over lava beds and on the shoulders of cinder cones, vents, and other volcanic features ensures plenty of unobstructed views, and with an average elevation of greater than 6000′ those views tended to be long.

There is a whole ‘family’ of mountains in this area. The Three Sisters themselves have alternate names which never managed to make it into general use: Faith, Hope, and Charity (respectively, north to south). There are also nearby peaks named The Wife, The Husband, and Little Brother. Just after we started we got a great view of the North and Middle Sisters: 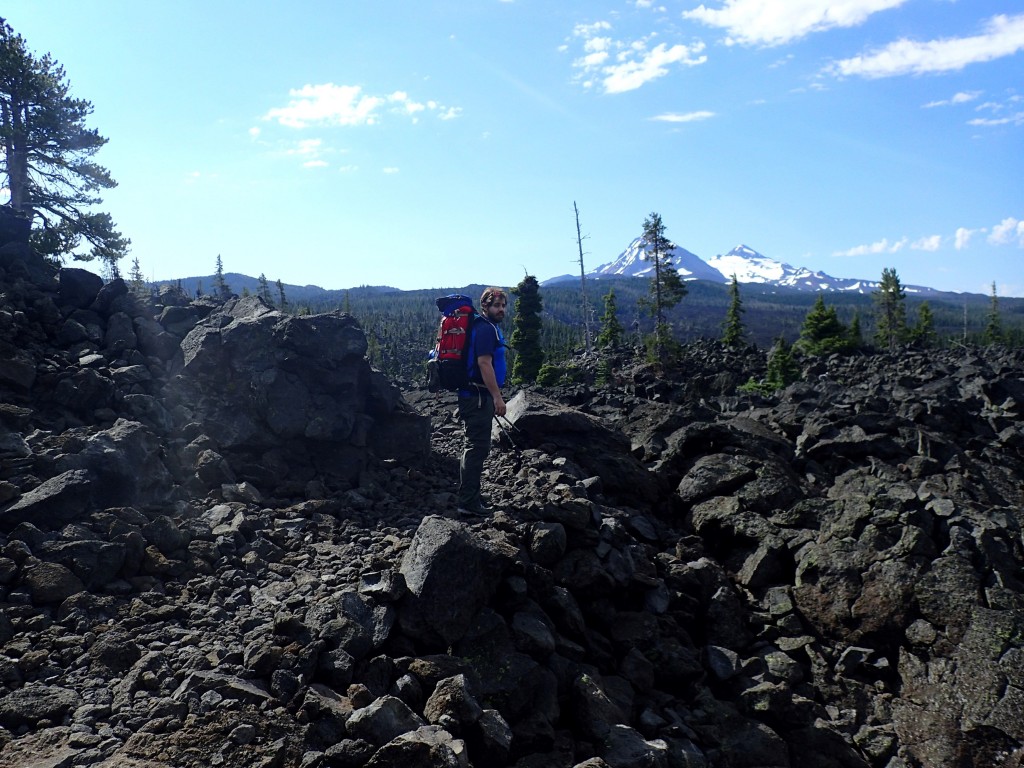 Of course, since we were hiking along the western edges of the Sisters themselves, we would be seeing these mountains a lot for the next few days. On this first day, we planned to hike to a point directly west of the North Sister, which is the mountain on the left in the above image (we are almost directly north of them in this image). That’s about 10 miles measured by boot. This would also carry us over the bulk of the lava flows in the area.

The large mountains in this region are volcanoes which formed over the last 170,000 years. They initially formed as shield volcanoes, with low, wide slopes resulting from eruptions of relatively fluid basalt lava that spreads easily. Later, they erupted more explosively and with more silicates in their lava. This lava was less fluid and formed more upright cones. Volcanic cones that form in this way are called stratocones. The combination is referred to as a complex volcano, and the more I read about these particular mountains, the more I see that their development and composition is indeed complex.

This produced young lava flows which are everywhere in this area. If you are looking carefully, you can see evidence of flowing lava just about anywhere you look in Western Oregon between the Cascades and the Coast Range, but most of it is quite old and has been overgrown, broken down, and covered up. Here however, the flows are relatively fresh at the beginning of our trek, most coming from recent vents and cinder cones which are 2,000 years old or newer. You can find far more information about the lava flows in this area than you are likely interested in on the US Geological Survey site. We would be crossing these newer flows from Belknap, the vents in the Mattheau Lakes area, Yapoah Crater and, Collier Cone (in that order).

This young lava is rough and mostly barren. I don’t envy the pioneers like Felix Scott, Jr. who directed the construction of the first road over the Cascades here in the 1860’s, or Dee Wright, who oversaw the construction of the observatory that bears his name in the 1930’s. The lava is mostly of the type referred to as ʻaʻā, which has a rough or rubbly surface composed of broken lava blocks called clinker. The sharp and broken surface of an ʻaʻā flow makes hiking incredibly difficult and slow. Luckily we have a nice trail to walk on, otherwise our daily progress would have been measured in feet rather than miles (no kidding). In many places, we found that lava flows would abruptly end. This resulted is some surreal views: 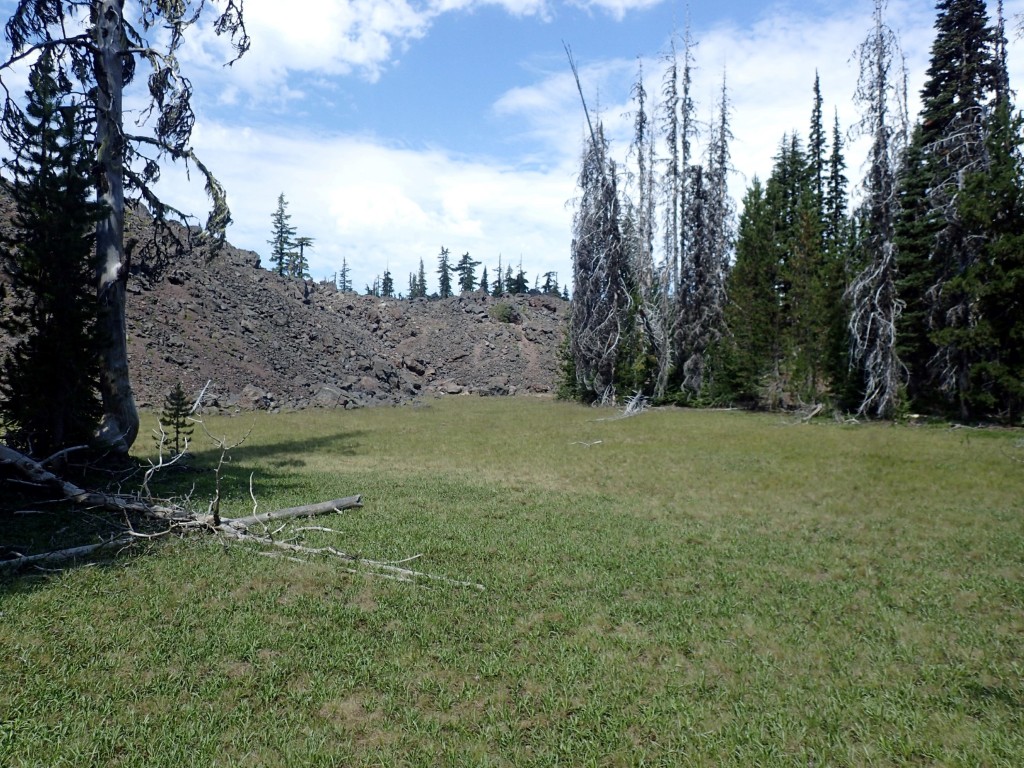 We diverted from the PCT at the North Matthieu Lake Trail for 2.2 miles. This allowed us to swing past North Matthieu Lake and reconnected us to the PCT at South Matthieu Lake. We alternated between hiking over lava beds and hiking in unaffected forest. Some of the time we were on “islands” of high ground that the lava flowed around. These “islands” are called kipukas (kee-poo-kah). Unlike the lava flows, the kipukas have large trees and all of the other things we expect in a temperate coniferous forest.

We were about 0.7 miles past South Matthieu Lake and about to climb back onto the lava when the sky suddenly clouded over and it cooled to the high 60’s. To our surprise it started to hail. The hailstones were large, all over 1/4 inch, and some over 1/2 inch. To keep from being pelted, we took refuge under a small clump of trees. The surreality continued: 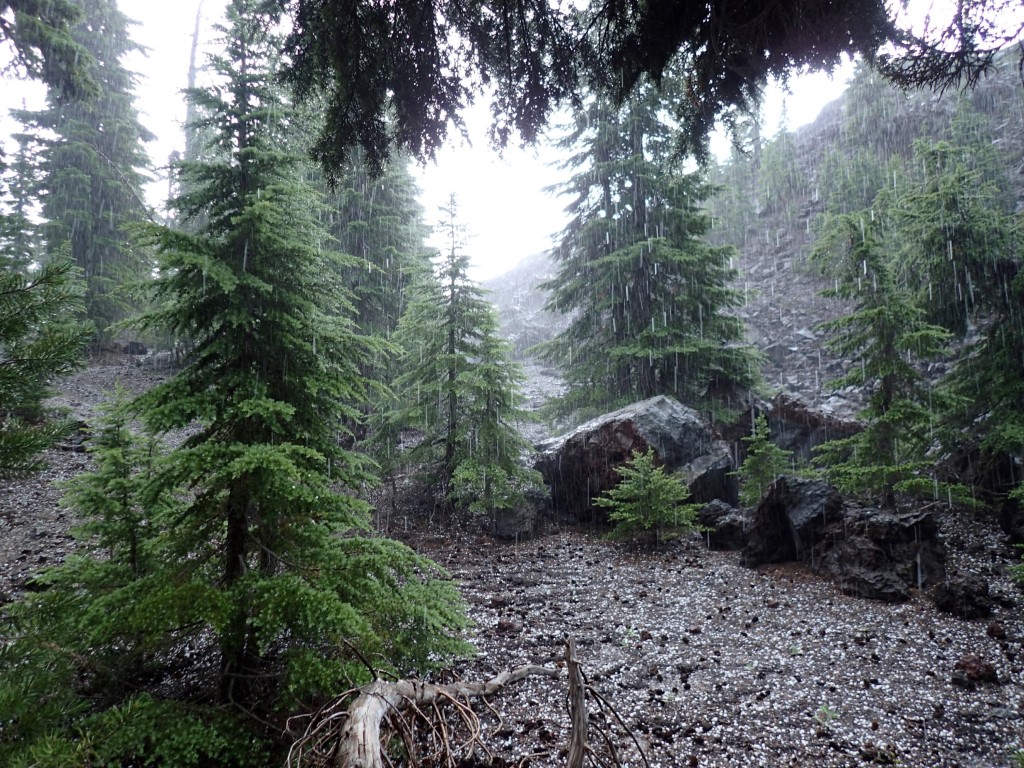 The hailstorm only lasted 15 minutes or so, but it left lots of hail laying around: 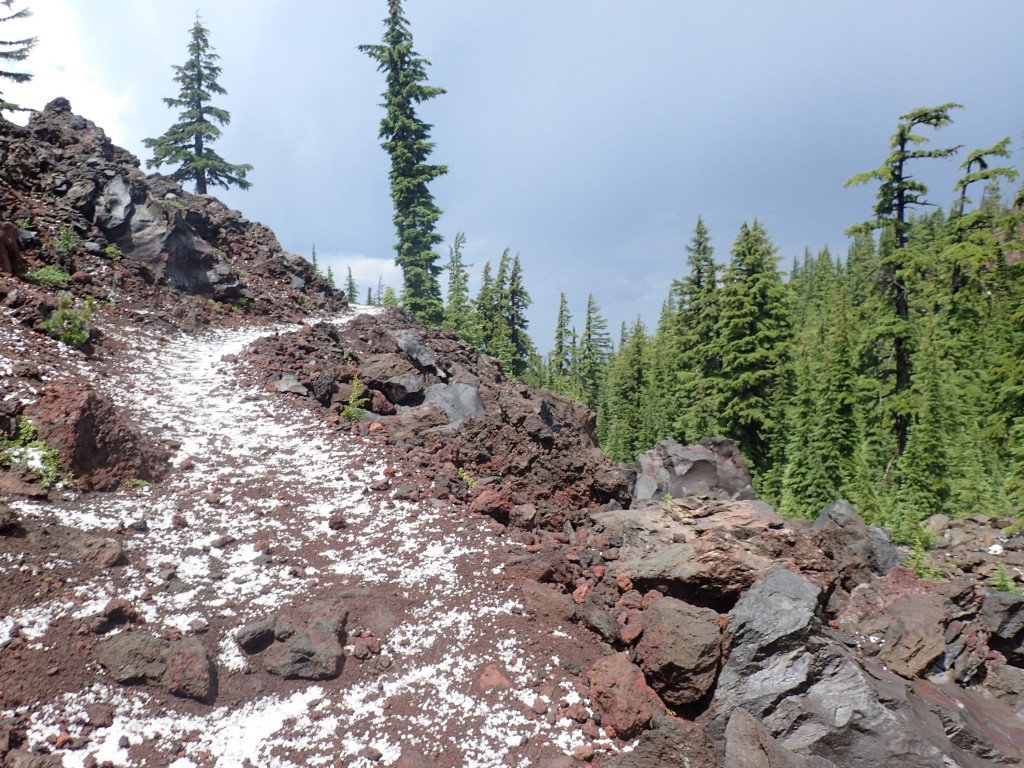 Afterward, it warmed back up to the 70’s and the hail quickly disappeared. We climbed onto the lava again and headed for Yapoah Crater, the cinder cone in the center of this picture, and the source of almost all of the lava we had crossed up until this point: 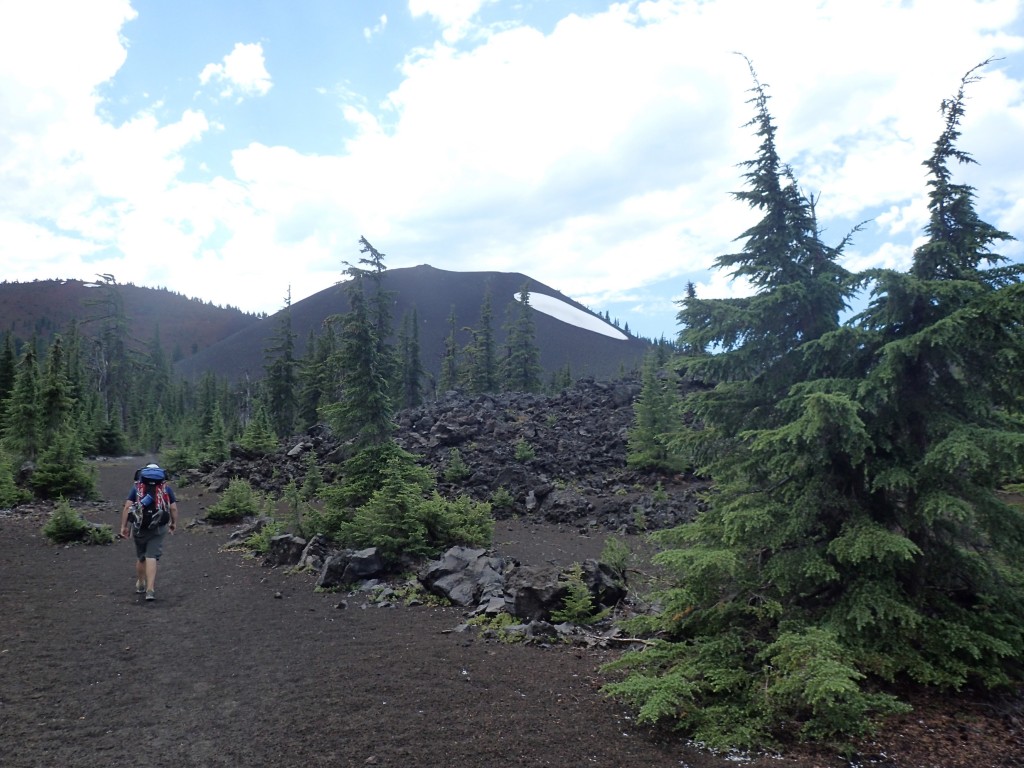 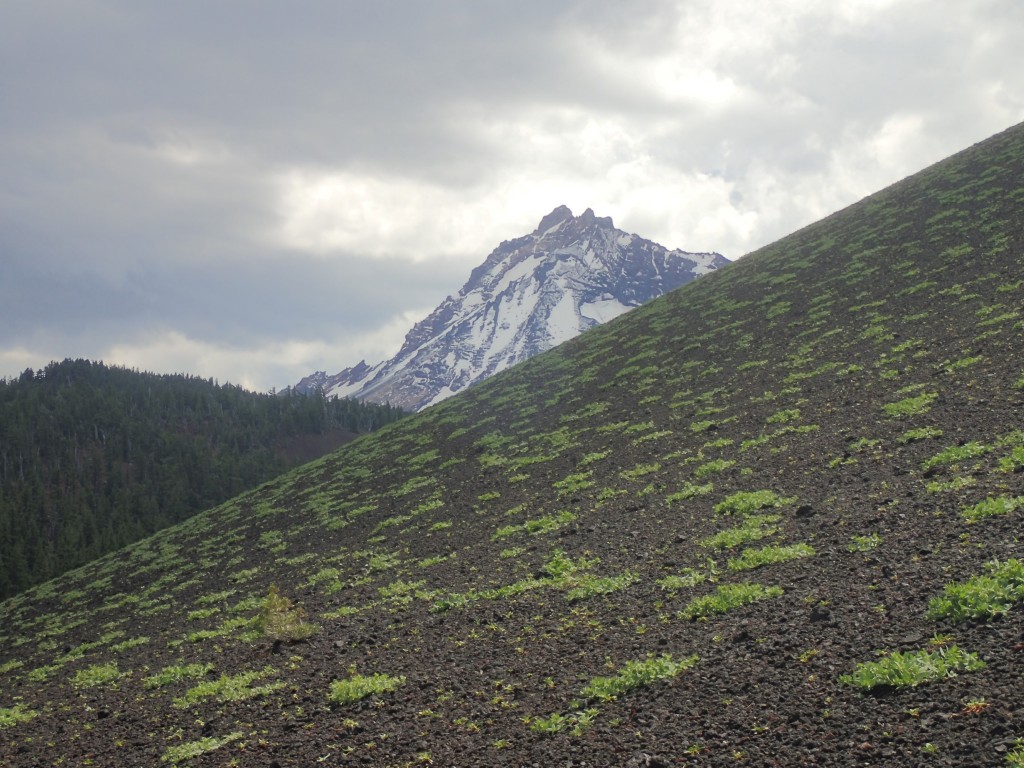 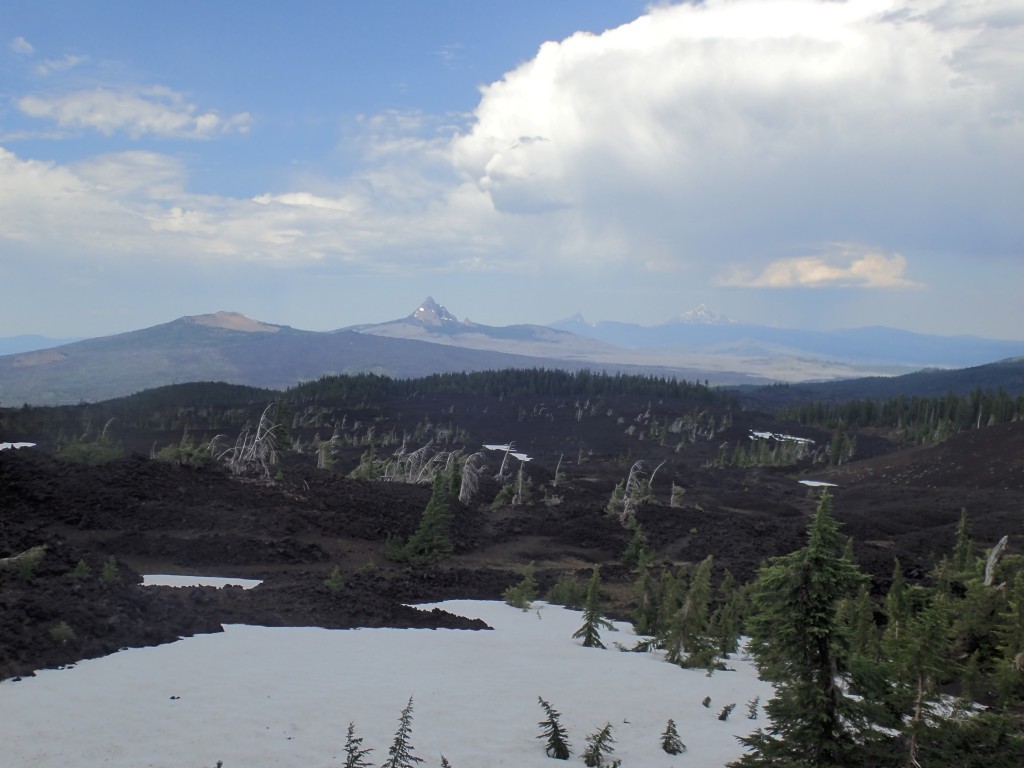 This photograph, taken as we descended off the shoulder of Yapoah, shows (left to right) North Sister, Middles Sister, and Little Brother (the rounded prominence to the right of Middle Sister, but much closer): 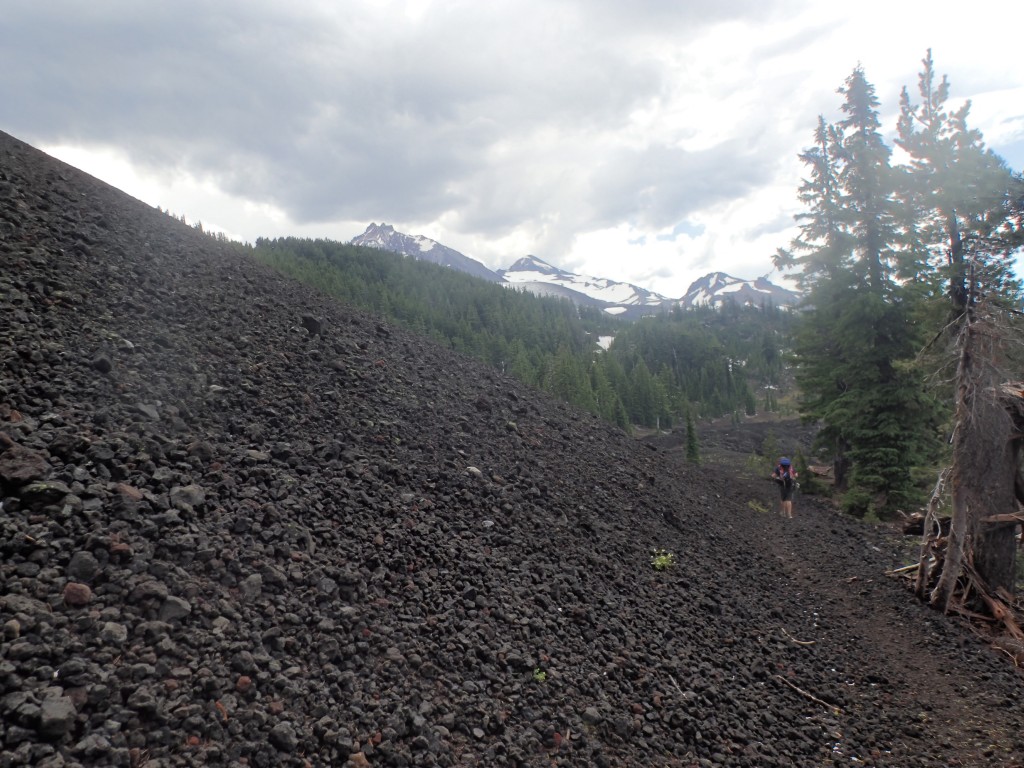