The morning of the third day we rose early. I had time to take some pre-dawn pictures of Sisters Mirror Lake: 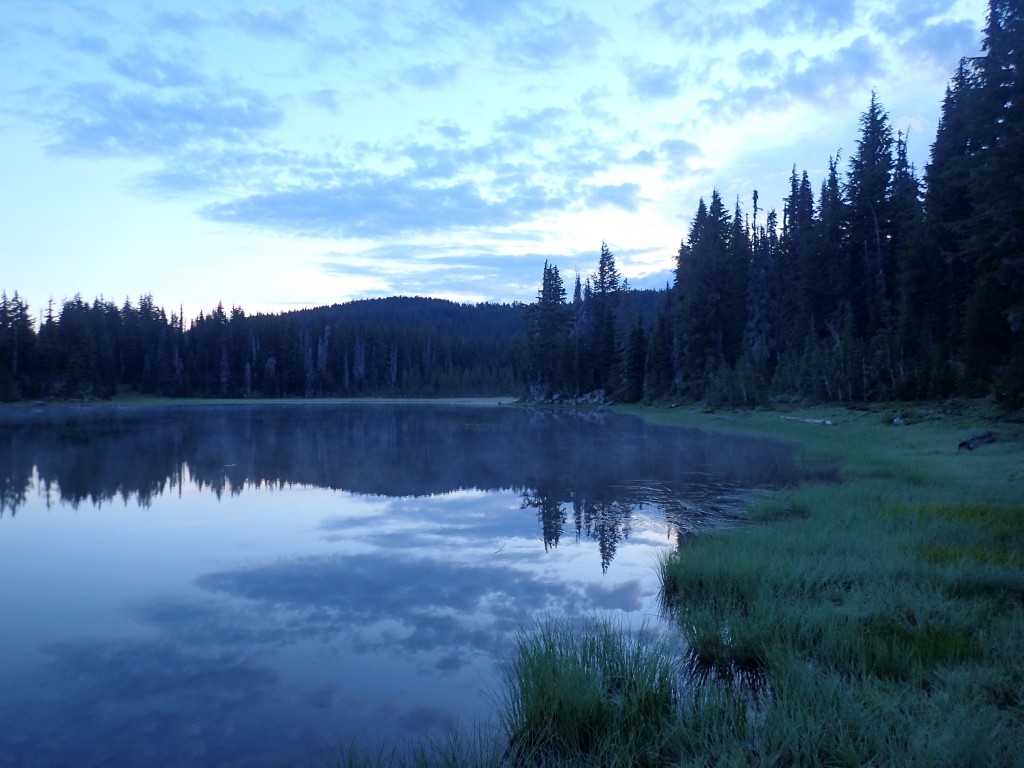 While I was taking that picture, I found this wildflower growing at the lake’s edge. I believe it’s either a Late Purple Aster or some variant of Fleabane. The light was bad, so I came back to take this picture after the sun had risen, just before we headed out: 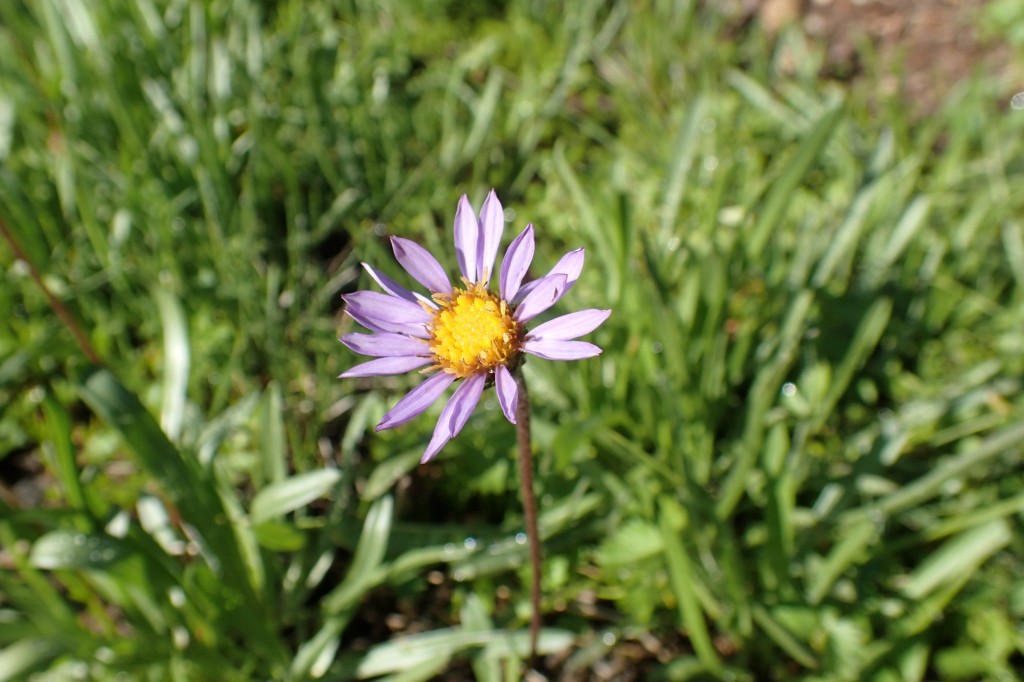 We planned another long day. Well, long for me anyway. Due to unavoidable circumstances, Jody needed to go home for a couple days. The plan was for him to depart at Elk Lake, where a friend could give him a ride home. He planned to meet back up with me again to do the last couple days of the trip. However, he had tweaked his knee on the first day in the lava fields, and although it didn’t seem bad at first it was getting too painful. As a result it looked like I was going to finish the hike solo. All we had to do was get him to the lake.

The first climb of the day took us over Koosah Mountain (6,508′). Here we are with the South Sister in the background: 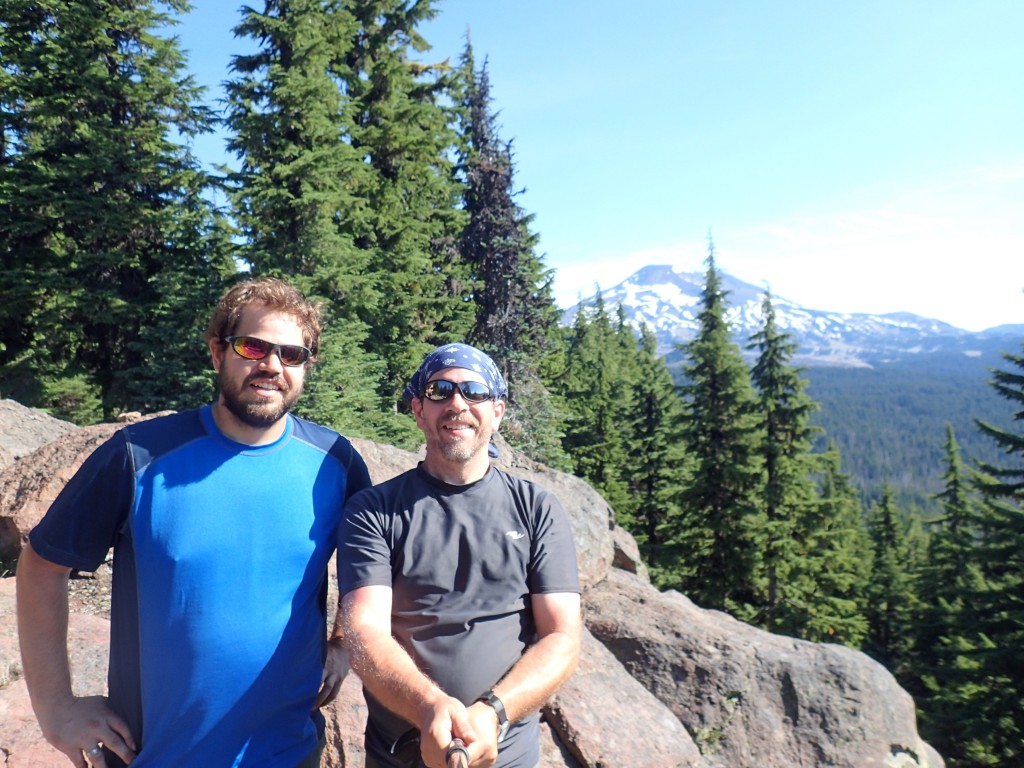 After that we descended back into the woods for a while. About 5.8 miles into the day we ran into the area west of Elk Lake. There was a large wildfire here 16 years ago in 1998. It is still recovering. If you look closely you can just see part of Elk Lake to the left of center in the distance: 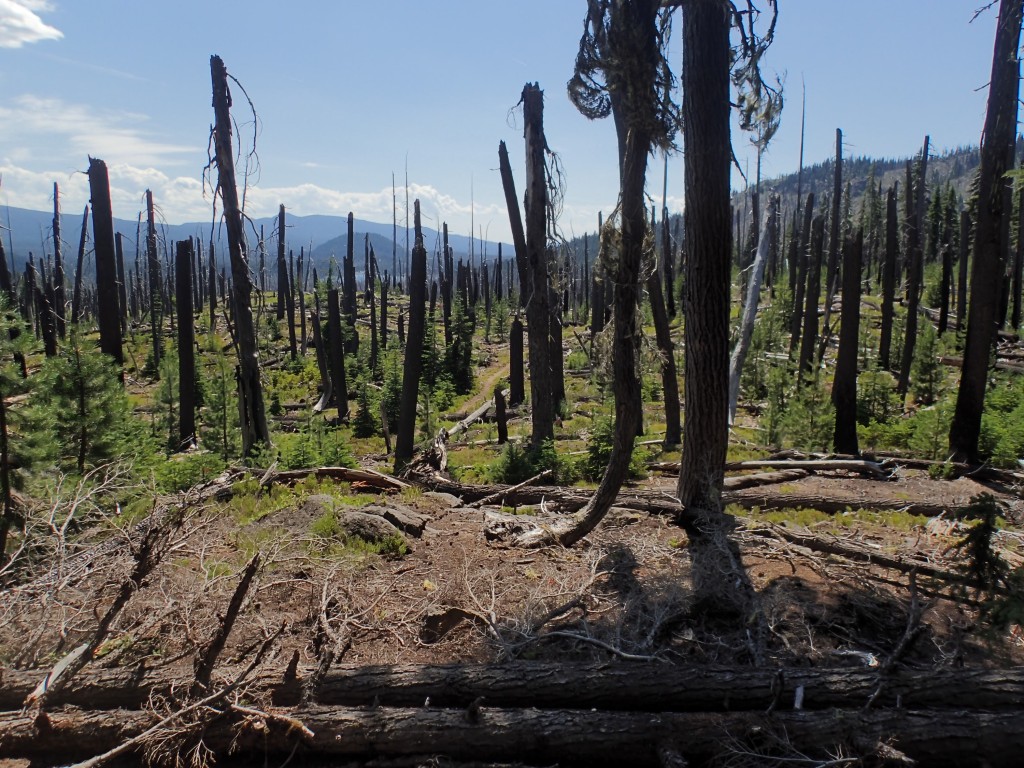 Here is some video of me hiking through it:

We followed the side trail down to the resort on the lake’s edge. I wanted an ‘after’ picture of the two of us. Unfortunately it turned out to be a poor picture and we look blown out and sunburned: 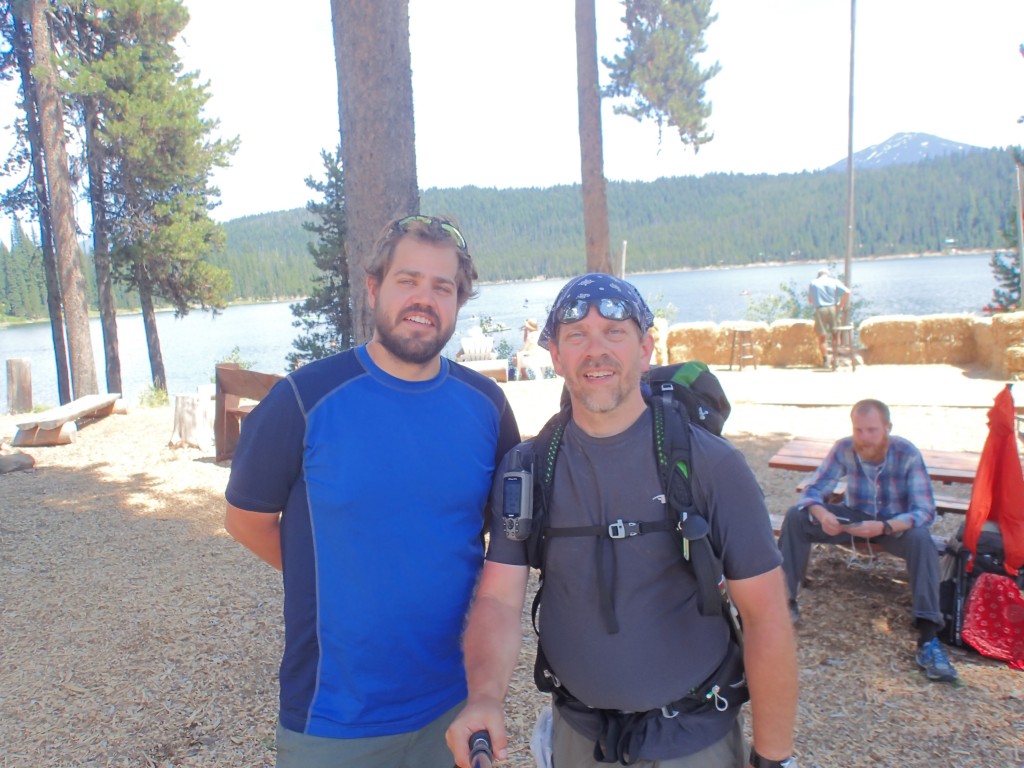 We knew we were getting some sun, but I expected my sunscreen to protect me. In retrospect it might have been too old to be very effective – I’ve been using that same tube for several years. Jody verified that his ride was coming, and I went into the little store there to get some sunscreen. Not surprisingly, they had only one kind of sunscreen, they only had on small bottle left, and they wanted $10 for it. I allowed myself to be gouged – the sunscreen was more important than the $10.

Jody did well considering he hadn’t been able to train much and he was still carrying his older, heavier gear. He knocked out 31.8 miles of trail while he was with me, mostly on a wonky knee. Bravo! He has since recovered and his knee is fine. He is looking forward to the next trip.

So having ‘ditched’ my brother, I headed out on my own. A few miles down the trail I was reviewing the pics I took at the lake and saw just how terrible we looked. Not having a mirror, I took a picture of myself so I could get a better look at just how bad the sunburn was. Not nearly as bad as I thought. Before the trip was over I was a nice shade of brown, but I never had any peeling or other signs of sunburn. The redness just changed to a tan. Lucky me – it could have been far worse. I’ll make a better effort to rotate the sunscreen so it isn’t so old on future hikes: 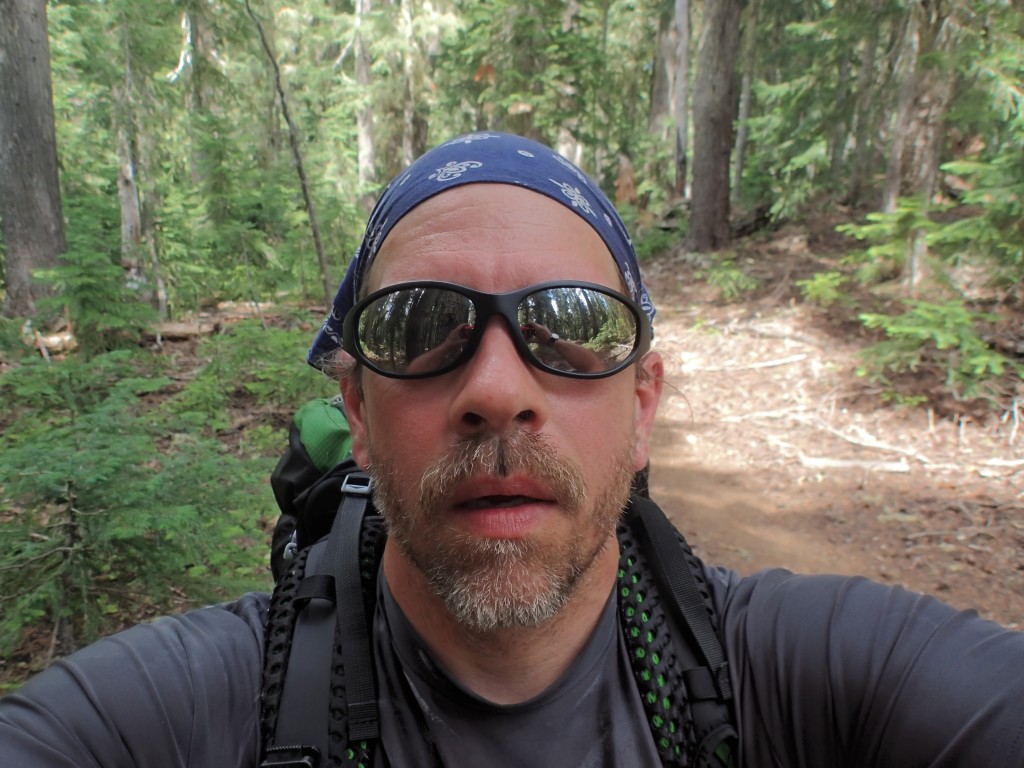 Frankly, there was less to see after this point. Jody did get to see most of the spectacular views. From this point on, it was mostly hiking in the trees, with lots of little lakes but few views of the surrounding mountains: 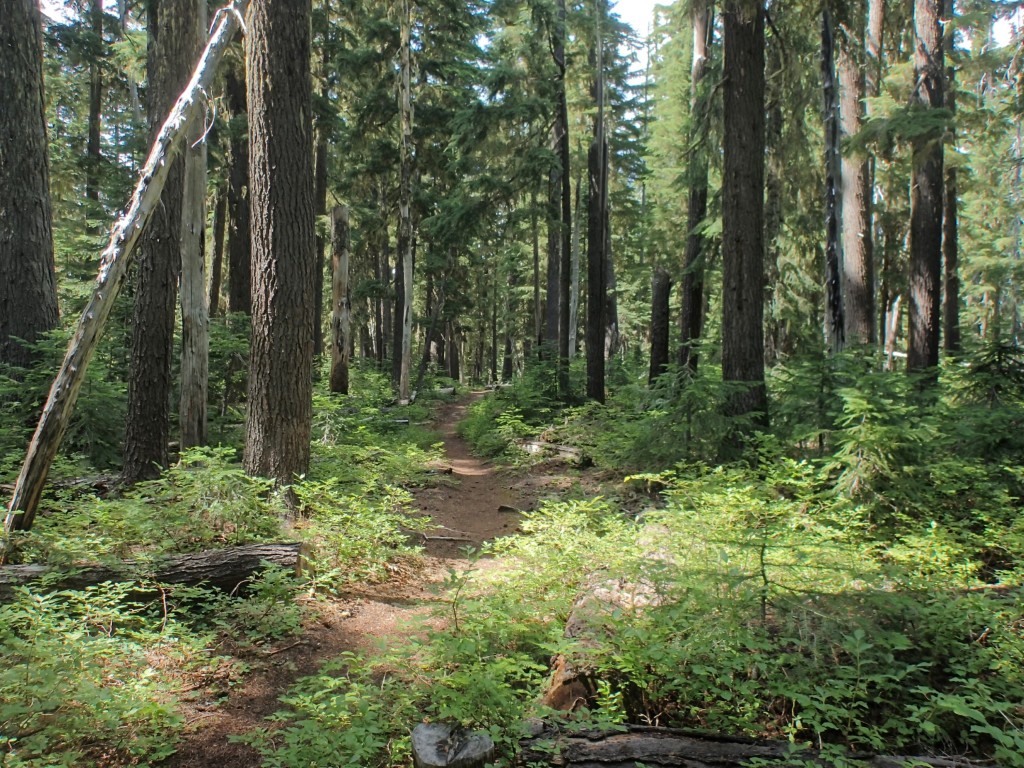 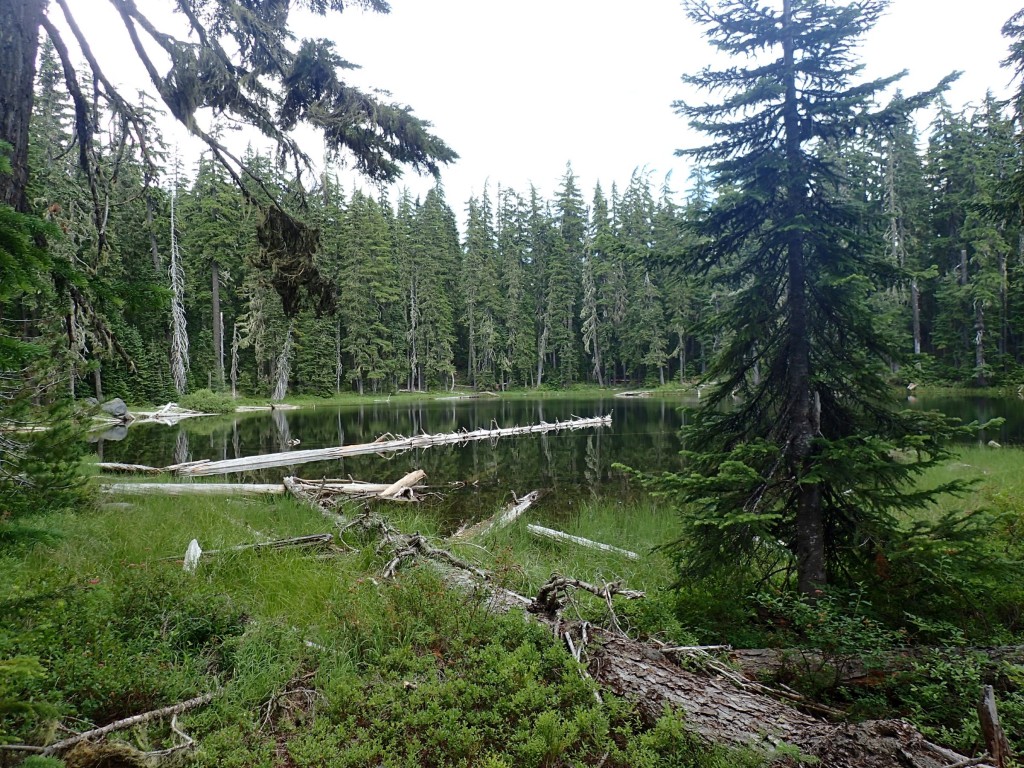 I started my descent into the Mink Lake Basin, then stopped for the night at Dumbbell Lake. Picturesque Dumbbell has a long narrow peninsula. When I got there, no one was setting up out there, so I went for it. It was a fantastic campsite: 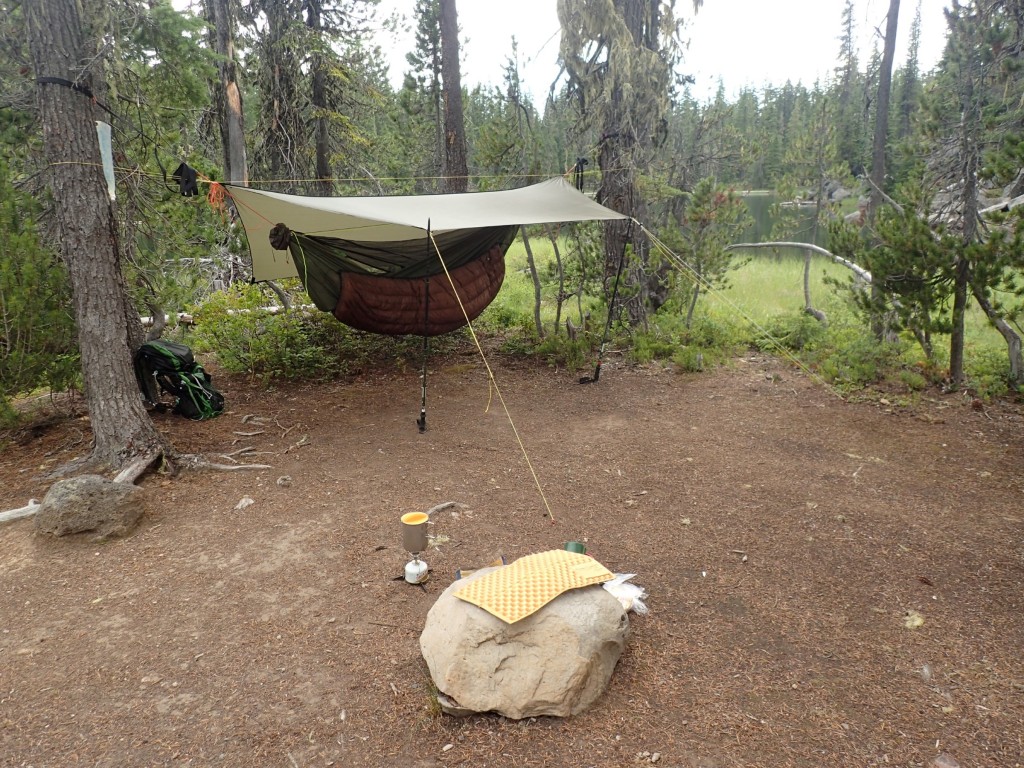 I took a video of the route from the root of the peninsula to the tip where my camp was in an attempt to capture just how long and narrow it was. The sign said “No fires”:

The only negative was a helicopter that kept flying back and forth overhead. This went on for a couple hours. The helicopter may have been associated with a wildfire that was in progress somewhere to the east of me, but it certainly wasn’t dumping water or carrying any hotshots (firefighters who drop into a remote forest fire by helicopter or parachute). As best I could tell, it was either a fire boss overseeing the fire, or it was a sightseeing operation. Either way it definitely impacted the solitude normally associated with wilderness: 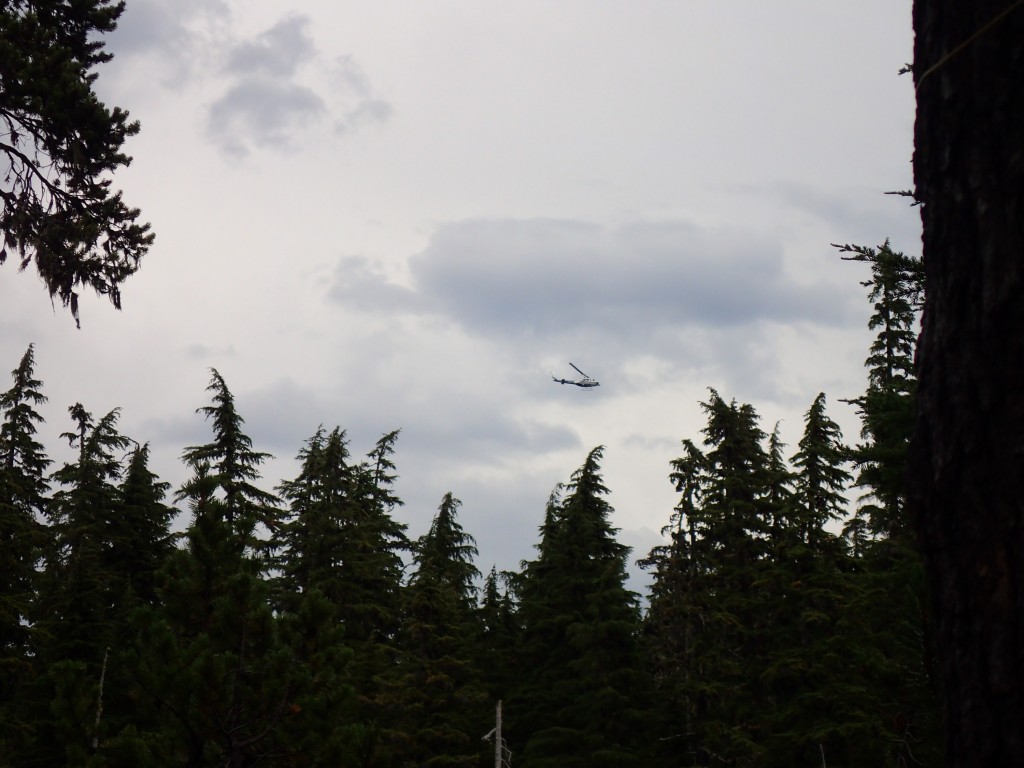 Here is my KMZ file with my route for the day and all the picture locations. Please feel free to download the file and view it in Google Earth.