On August 1st I awoke to my first full day hiking alone. After the long hauls of the last two days (14.7 and 14.1 miles) this fourth day was a bit of a break at just under 10 miles. My goal was to hike south on the PCT to Cougar Flats, then veer west off-trail and around Irish Mountain to East McFarland Lake.

On the trek I did in 1979 that inspired this one, we hiked another 2.5 miles south on the PCT, then bushwhacked over Irish Mountain to McFarland Lake. My memories of this lake were very positive. It was beautiful, pristine, and secluded. However that route involved climbing and then descending extremely steep talus fields (a collection of rocks that have tumbled down a hill or cliff that is slowly coming apart) and was very difficult.

Years later when my wife, my kids and I were looking for a good hiking destination we hiked in to McFarland from the west side on Crossing Way Trail. Eventually it became a staple hike for my family, and I have been up to McFarland lake all but one year since 2000. It didn’t take too many trips before we discovered that the talus field at East McFarland stays almost magically mosquito-free, and that East McFarland is a much nicer lake as well. So on this trip I decided not to stay at McFarland like we did 35 years ago, but instead to stay at East McFarland. As a bonus, coming from the Cougar Flats area of the PCT promised to be an easier hike than any of the other routes.

So I headed out from Dumbbell Lake. Jumbles of talus are common in this area:

Almost immediately after leaving Dumbbell Lake it began to rain. This is Island Lake, which actually has no island:

Luckily it was only a light rain, and since I was prepared, I didn’t get wet. Here’s an unnamed lake 25 minutes down the trail from Island Lake. It was still raining, but beginning to slack off: 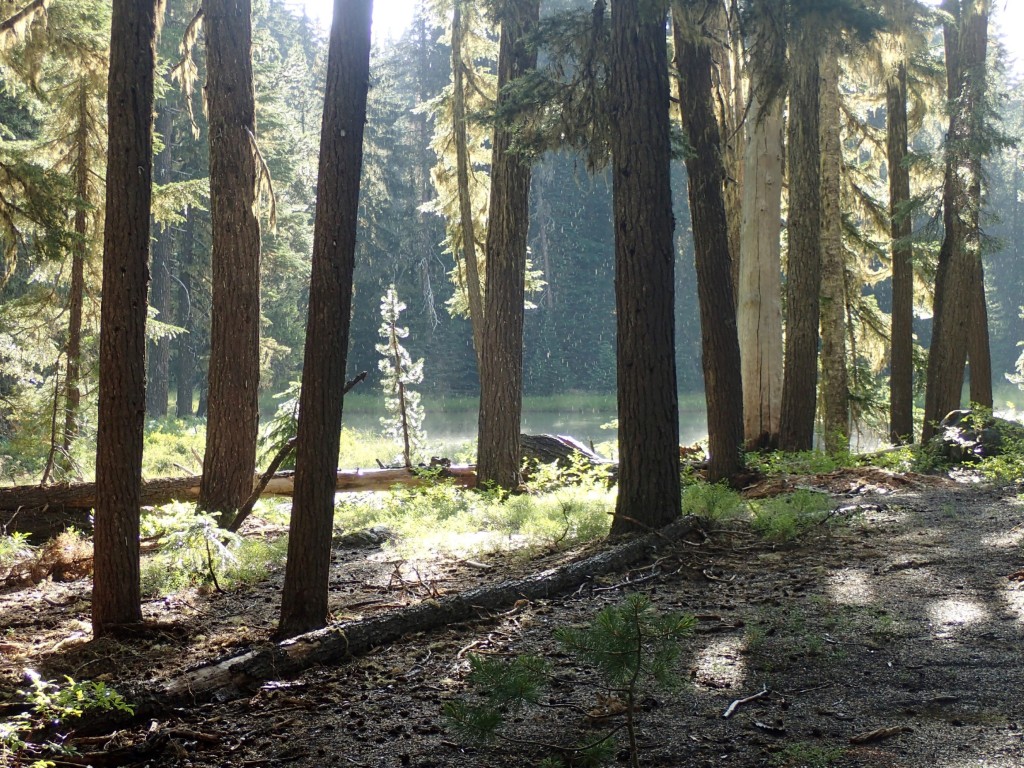 By the time I reached Horseshoe Lake (about 1.5 hours into the day) the rain had stopped entirely and wouldn’t return for the remainder of the trip: 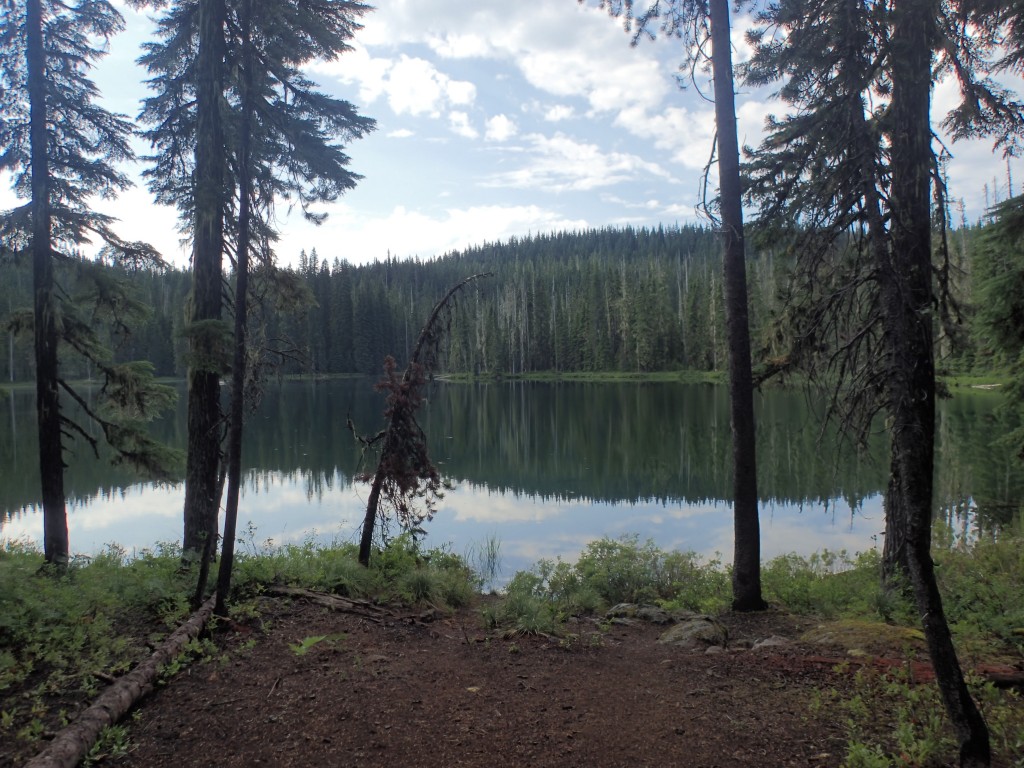 A lot of this day’s hike there was nothing to see but trees, small lakes, and ponds. This one doesn’t have a name: 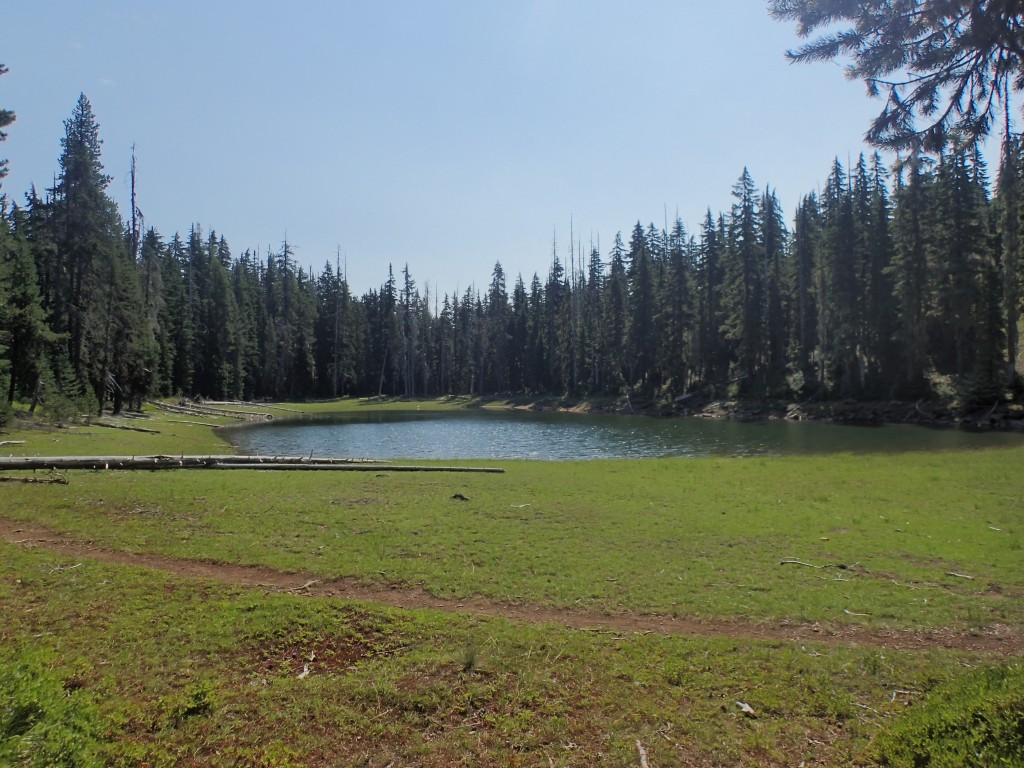 Just after noon I reached the Cougar Flats area. Taking a right off the trail and into the trees, I found that the jaunt from the PCT to East McFarland Lake was even easier than I had hoped. Once at the lake I ate some lunch, and then I set up camp where the largest talus field juts out into the lake. You can see my setup to the right: 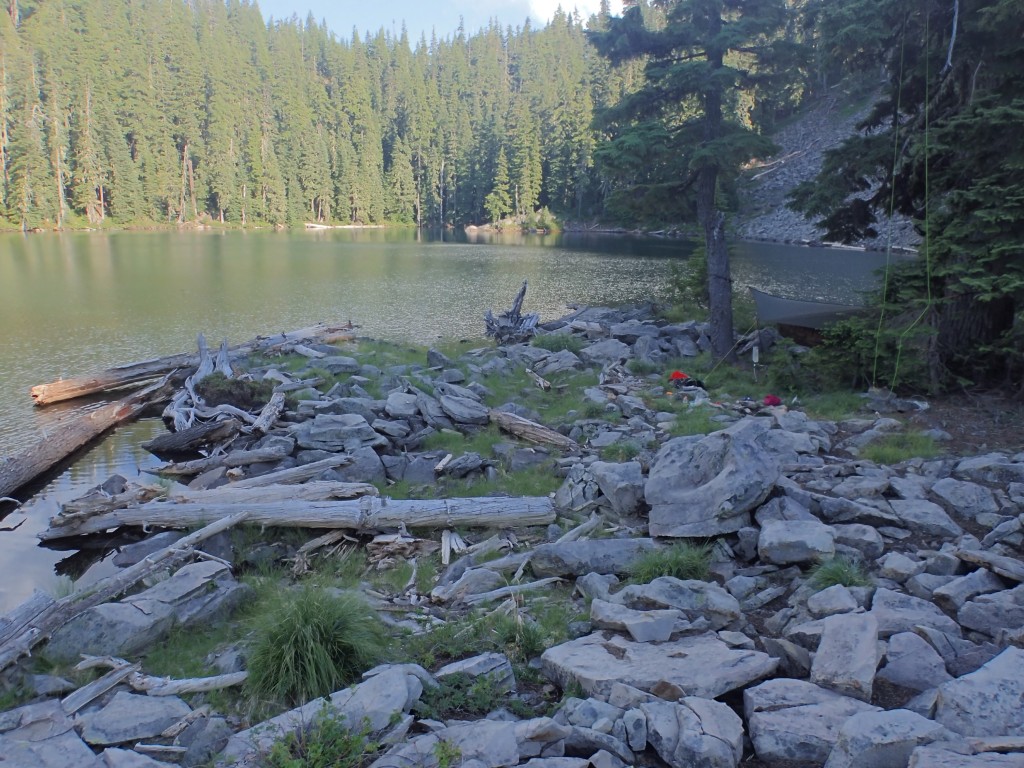 Since it was so early in the day, I decided to find a new route to the viewpoint on the north side of the lake. It’s up on the top of that ridge across the lake: 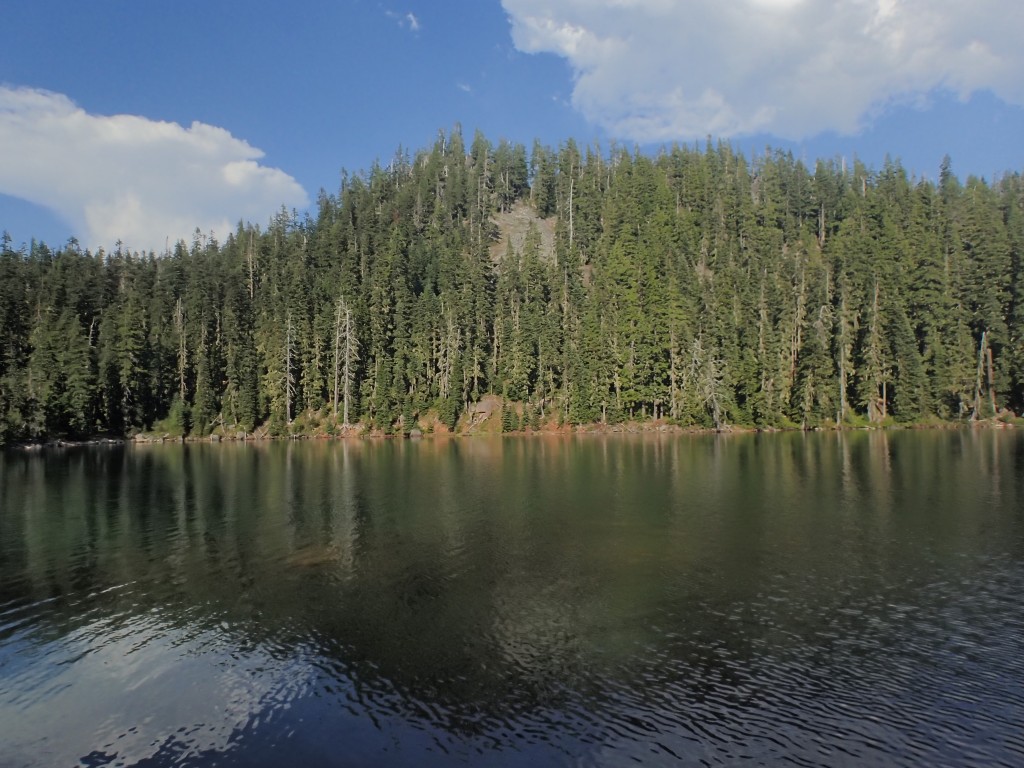 In the past we always went to the left around the lake and attacked the ridge directly. I know the ridge doesn’t look that impressive. It is deceptive. Though the climb from the lake is only about 300 feet vertically, much of it is unstable talus, all of it is very steep (nearly vertical at the top), and going up the left side or the near face involves several rather sketchy scrambles.

So this time I went to the right, climbing up onto the ridge above the lake from the right end, and I traversed the ridge as it wrapped around the lake. Here is a shot from up on top. That slope rising to the right in the background across the lake is where I am headed. At this point I’m already at the right elevation, but I have just started to circle the lake: 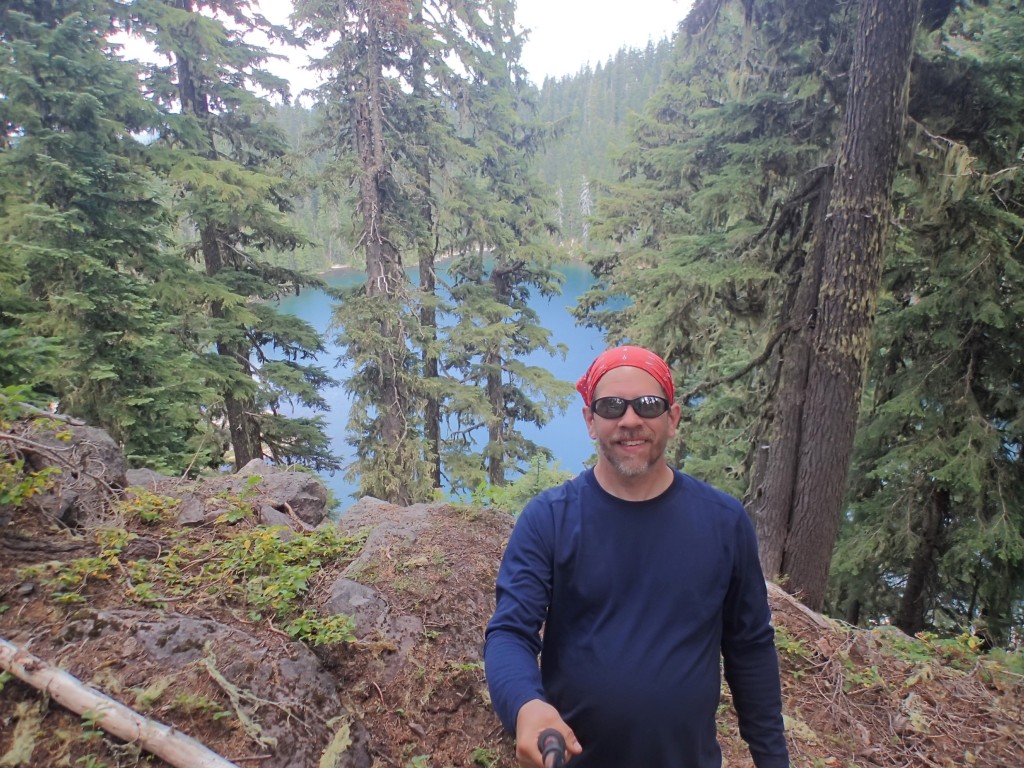 I was right. It was far easier and safer to get to the viewpoint this way. In this next picture I was almost to the target viewpoint, looking back across the lake. If you look at the base of the talus on the other side you can see what appears to be a single mature fir right by the lake’s shore. That is where my campsite is. There are actually five trees in a line there, but the nearest one masks the others: 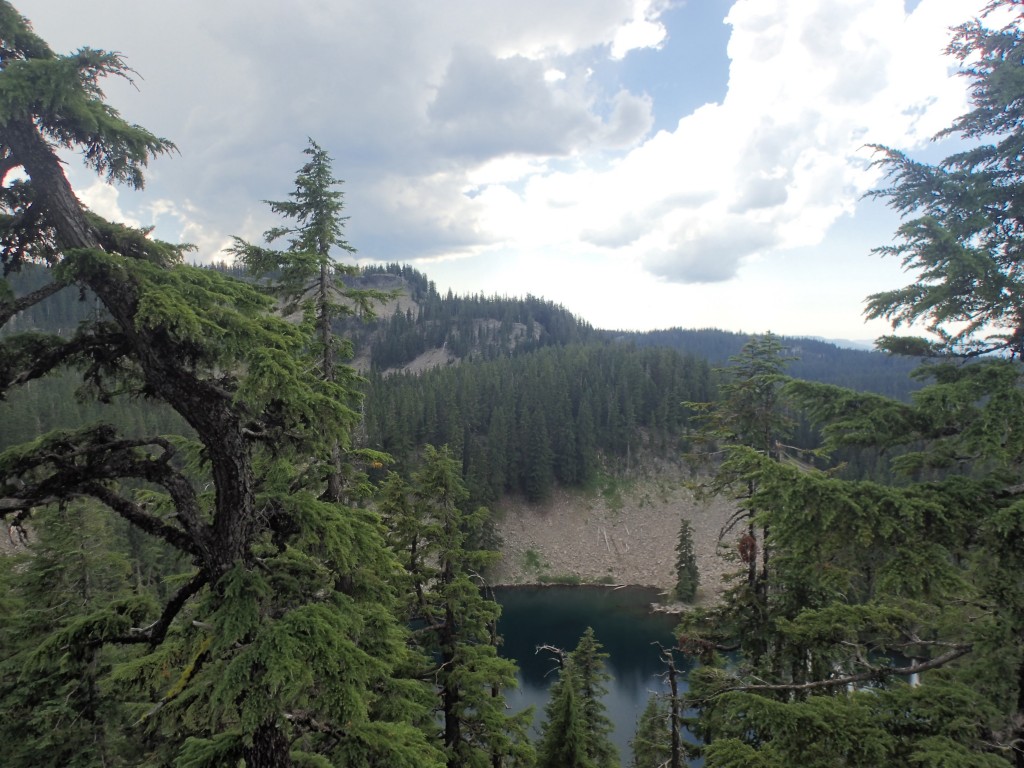 The viewpoint itself is at 6,200′. This isn’t incredibly high, but it’s higher than most of the surrounding terrain for miles and miles. And since I have a mostly unobstructed view for about 270° up there, it does lend itself to great landscape pictures: 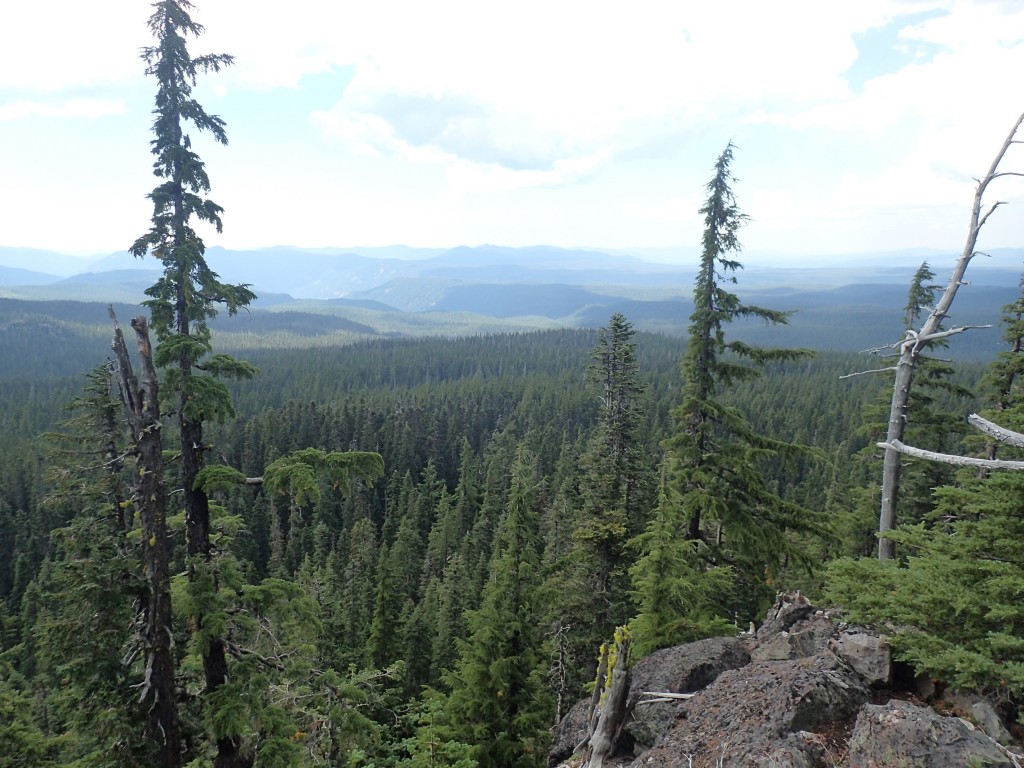 In this one you can see the Middle and South Sisters at the left (the ones with snow on them). I’ve come quite a way in the last four days! 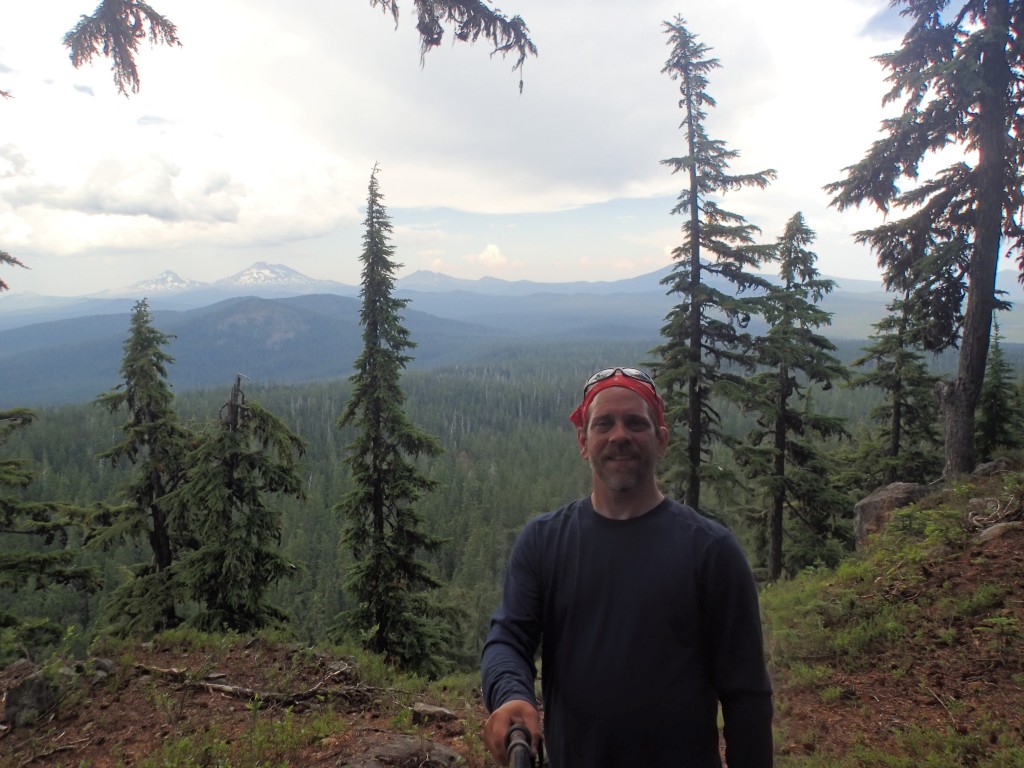 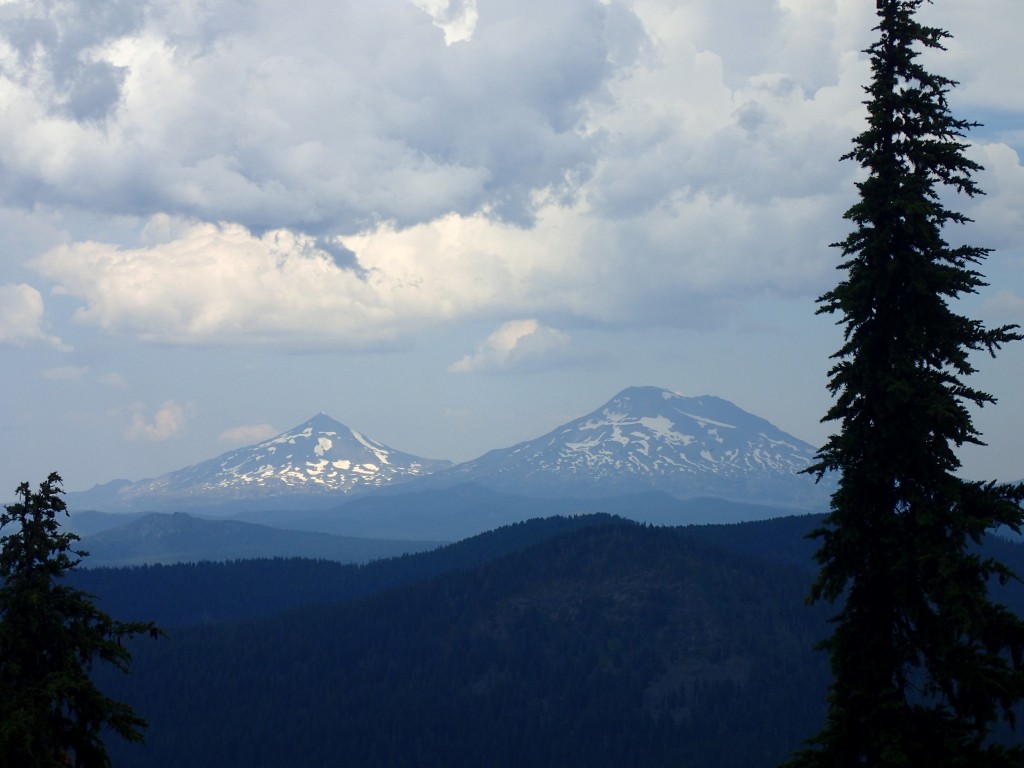 After hanging out up on the mountaintop for a while, I headed back down to camp. On the way I found this lichen and I was blown away by the color. It doesn’t show very well in this picture, but it was a bright fluorescent safety yellow: 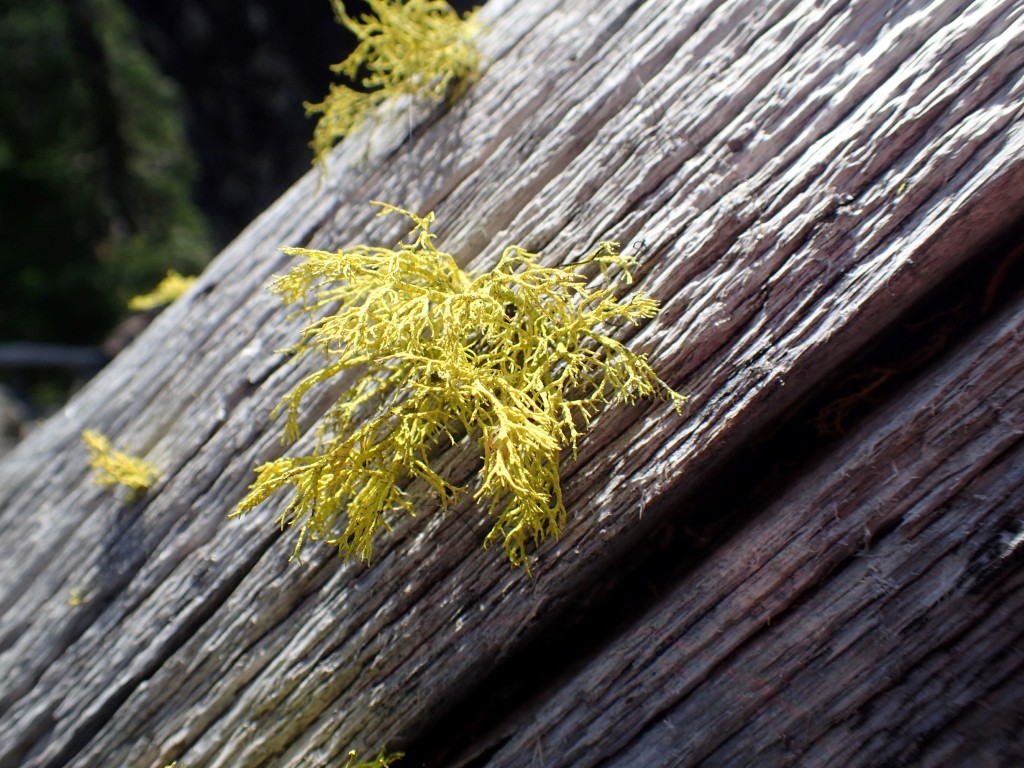 Once again, I was harassed by a helicopter that kept flying back and forth over the ridge. It gave up after a couple hours, but it was a frustrating event out here in the wilderness. What happened to solitude? 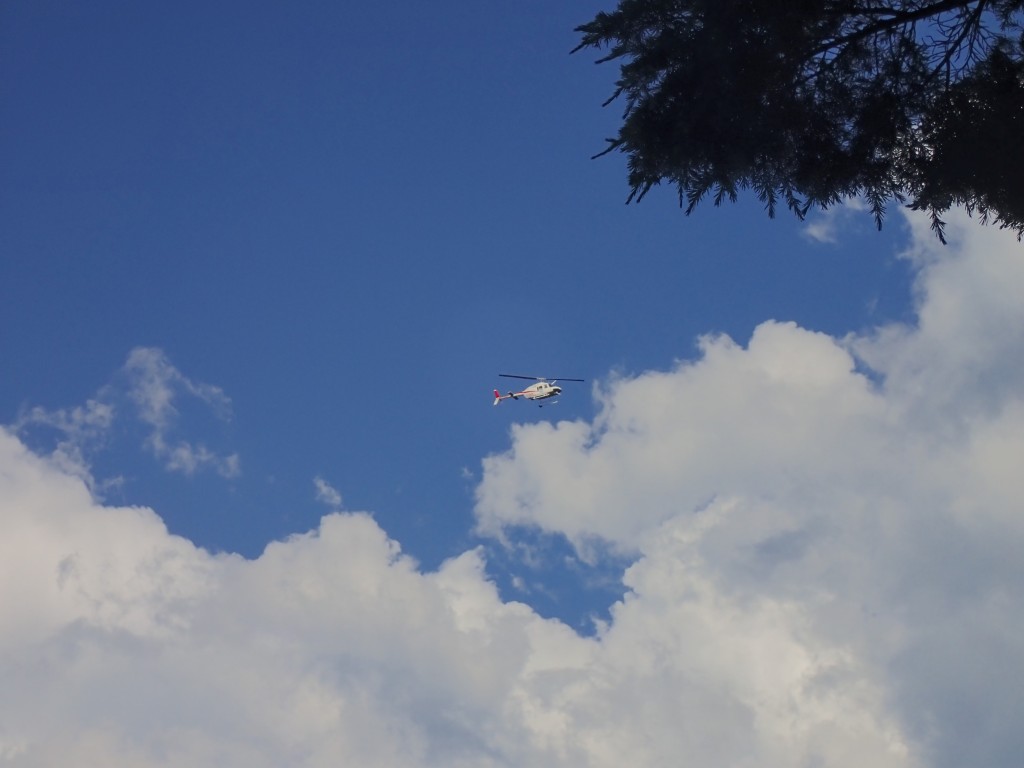 I did solve a longstanding question however. For years we had heard some small creatures in the talus. They make a sound that sounds like “MEEP!”, calling back and forth across the field of rocks in a call and answer fashion. We had never been able to actually spot them. But this time, with the whole afternoon to do nothing but relax in my hammock, one of them came out into the open near enough to take a picture. It’s not a great image, but it’s enough to finally identify the animal: 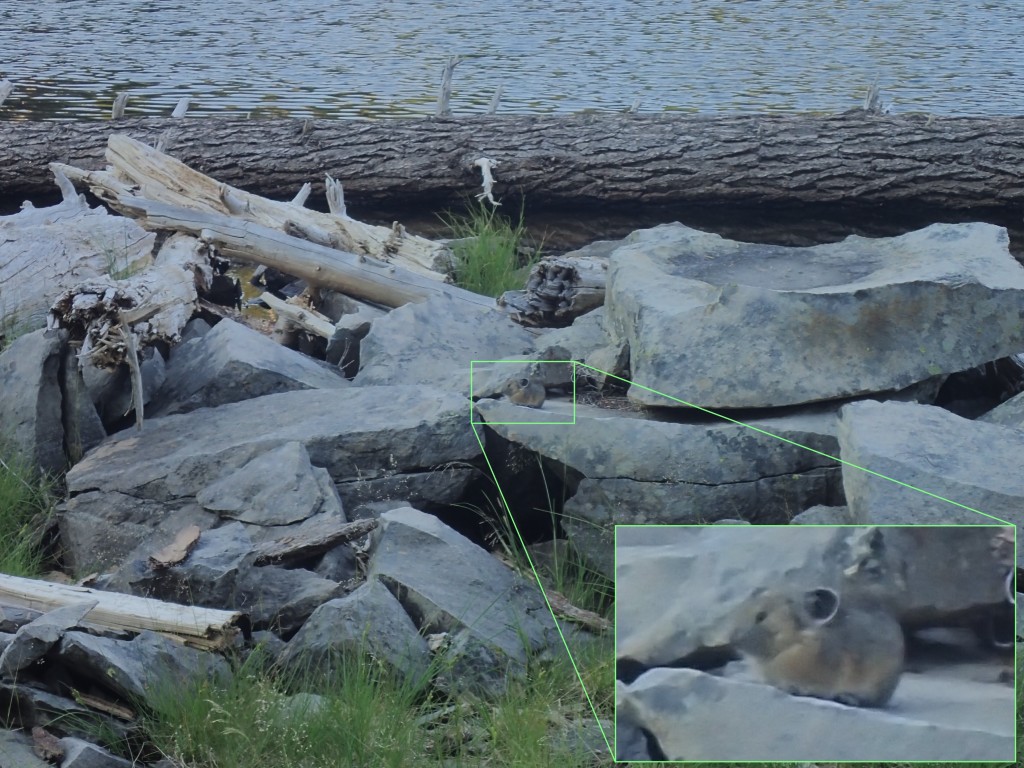 They are pikas, small mammals related to the rabbit. Apparently the calls are meant to defend their “haypile” of dried vegetation, which they gather to get through the winter. It snows pretty good up here and pikas don’t hibernate, so they have to build up some food reserves. In any case, now I know what we have been hearing up here for years.

I spent the rest of the afternoon relaxing: 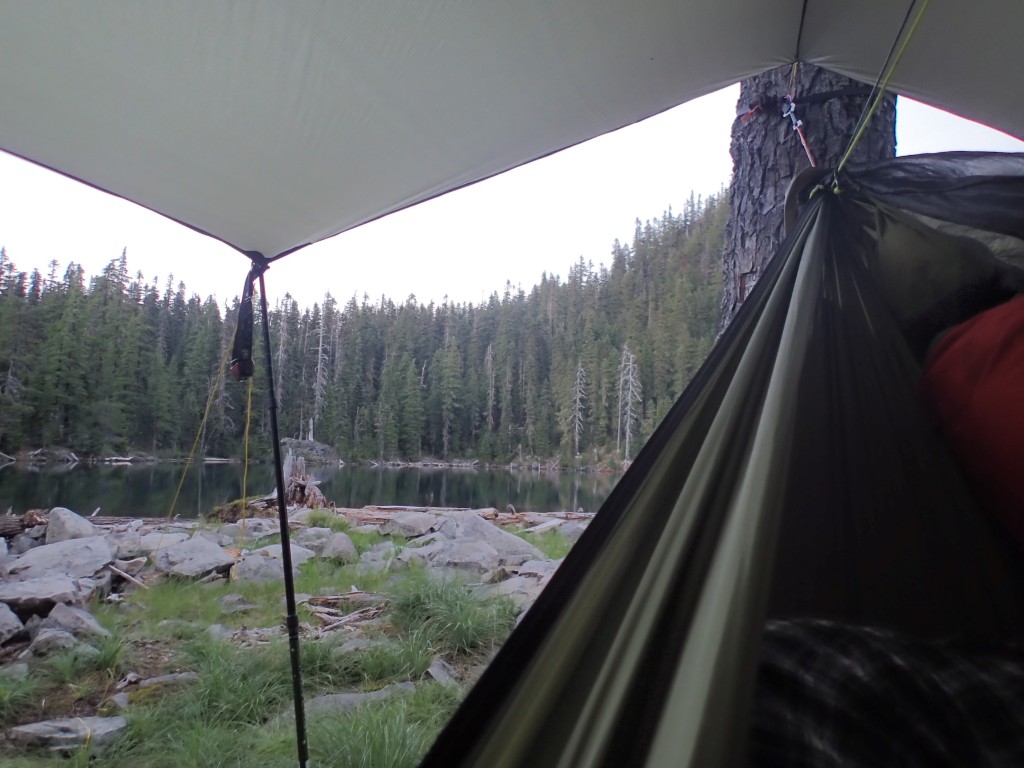 I covered 9.69 miles. Here is my KMZ file with my route for the day and all the picture locations. Please feel free to download the file and view it in Google Earth.