August 2nd was my 5th day on the trail. It was originally supposed to be a zero day, a day where we just hung out and didn’t do any miles at all. However, the next day was slated to be about 16 miles and I decided I didn’t want to put myself through that for no reason. I had already scouted the new route to the lookout above the lake the day before and had no other goals in the area. I decided to make this a short day, using the morning to clean up and relax, and then hiking less than 5 miles to Brahma Lake. This would make the next day more manageable.

I had arranged for a food drop at this lake so I wouldn’t have to carry a full 8 days’ worth. I had included some luxury items and some spare gear as well. I sorted through my gear and food and re-packed it all, leaving my hammock set up for lounging purposes: 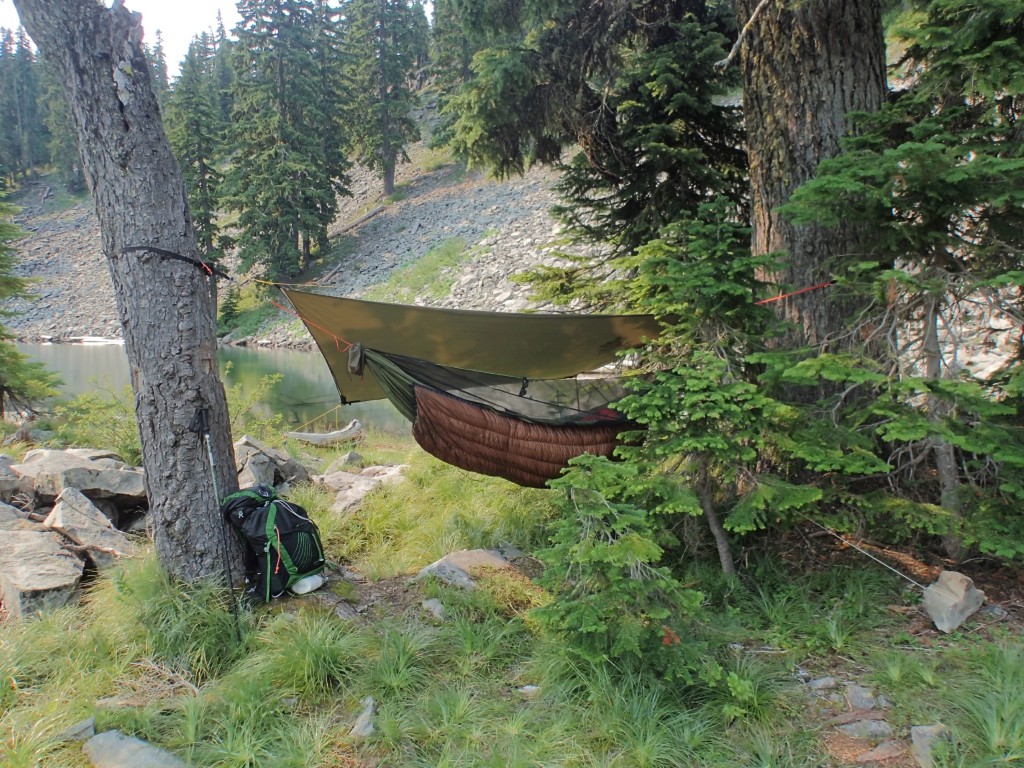 Then I did laundry. I washed almost every piece of clothing I brought with me, which frankly wasn’t much – 1 short sleeve shirt, 1 long sleeve shirt, 1 pair of pants, 2 pair underwear, my trail gaiters, 4 bandannas and 3 pair of socks. Then I strung up a line and hung them to dry. In the meantime I relaxed in some clothes I had put in the re-supply. It was a lazy morning: 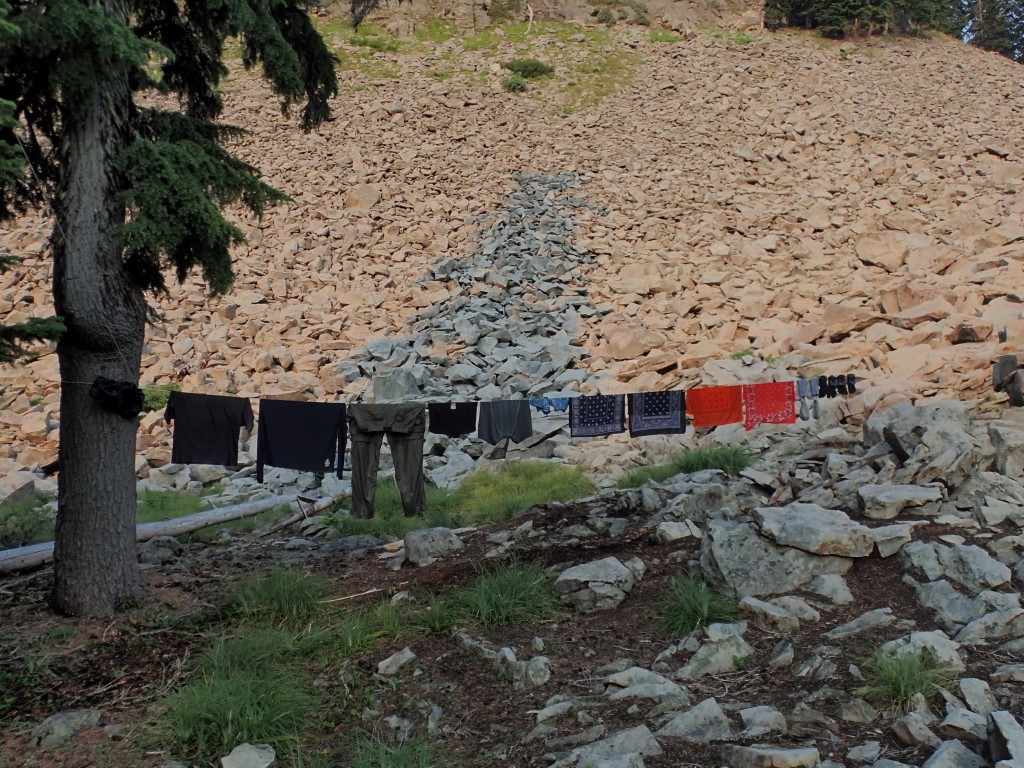 By noon I was all fresh, clean, packed, and ready to roll. That felt good. I said good-bye to my favorite lake and headed for the trail, backtracking via GPS: 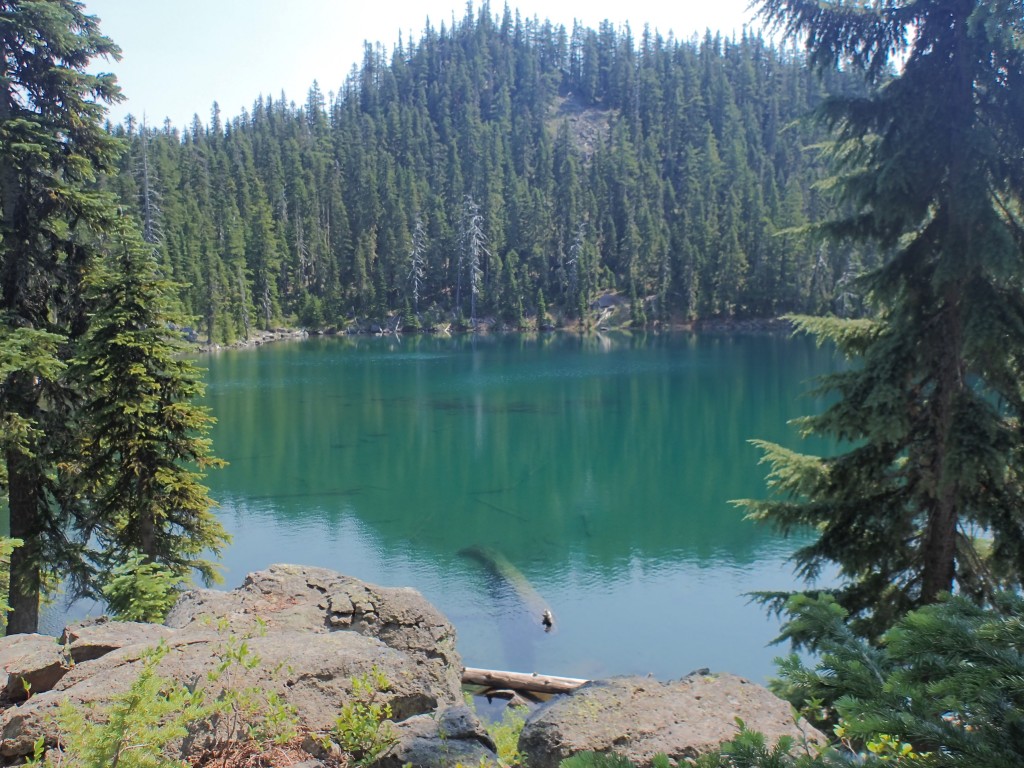 Because it was a short day and there wasn’t much in the way of views along my route, I spent more time looking at what I found close-up. I noticed these rare PCT markers: 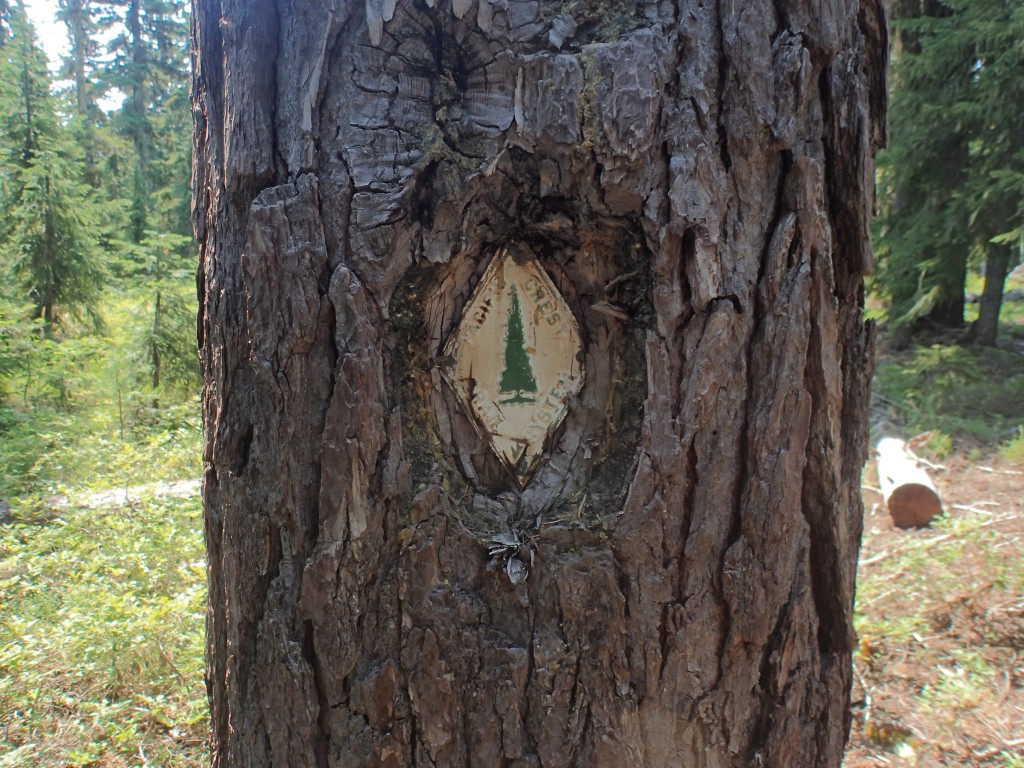 There have been several styles of marker used to mark the PCT. Originally the trail was marked by simple blazes, where the bark was removed from a spot on the tree, typically a small square area above a second area that was rectangular. They kind of resembled a lowercase “i”. These blazes allowed travelers to follow the trail even if it was under snow, overgrown or simply poorly made in the first place – one simply went from blaze to blaze like connecting dots across the map. On this trip I saw 1000’s of such blazes in various stages of healing over.

Later, small plaques were used instead of blazes, mostly at trail intersections to keep hikers on the right trail. These are also referred to as ‘blazes’, but are typically nailed to the trees. Many styles have been metal. Currently it appears that they are using wooden markers on the PCT, but many of the old metal ones remain. These particular markers were nailed up over the cut-in blaze, and the tree has started to heal over and cover them. The picture above and this one below were two sides of the same tree: 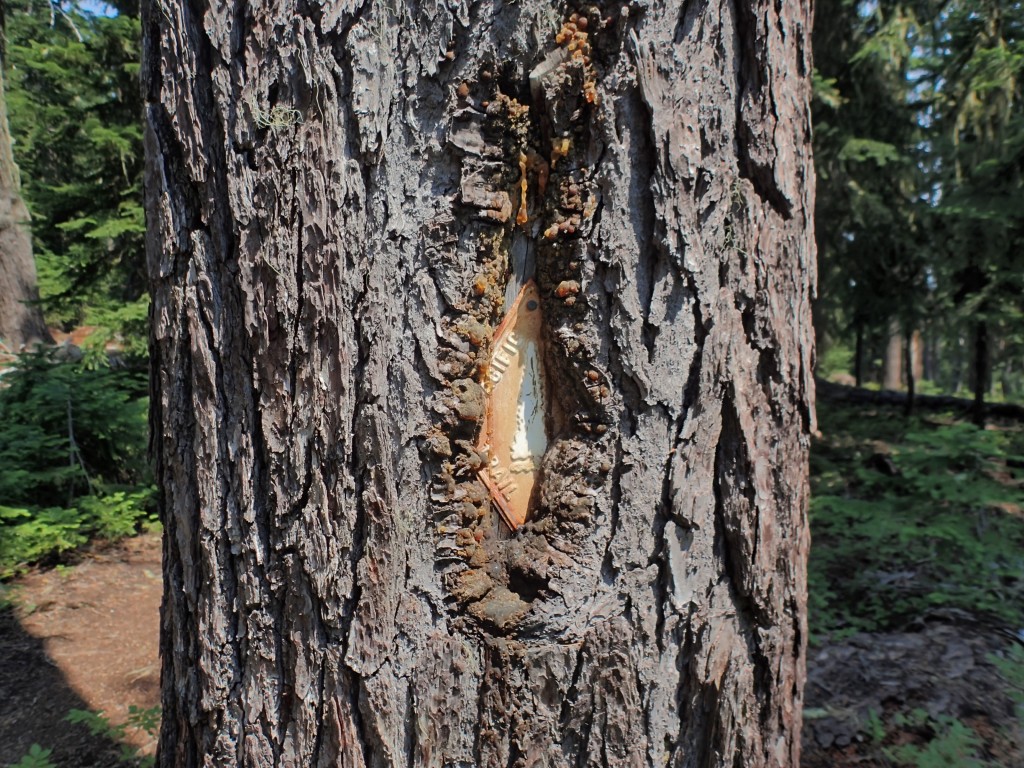 A few miles down the trail I took a break at Blaze Lake (what a coincidence). While there I saw this exuvia (the remains of this insect’s exoskeleton after it molts) still clinging to the leaf it was hanging on to when it shed and moved on. It was a dragonfly nymph, also known as a “mudeye” (thanks to ArakAtak for the identification): 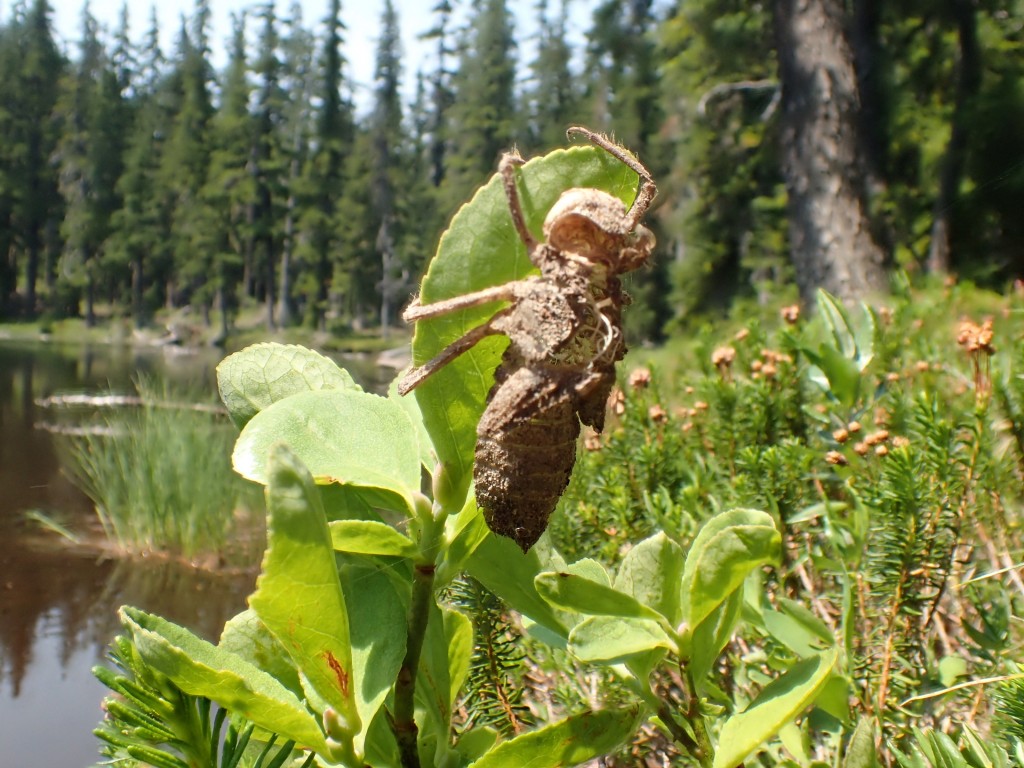 I stayed and enjoyed the afternoon for a while. I really wasn’t in a hurry.

About 1/3 of a mile after I left Blaze Lake I ran across this tree wedged between two others. Notice that it is broken off at the bottom and there is no stump. This is actually the top of a larger tree:

Looking right, you can see shattered tree trunk, and then on the other side of the trail, two logs: 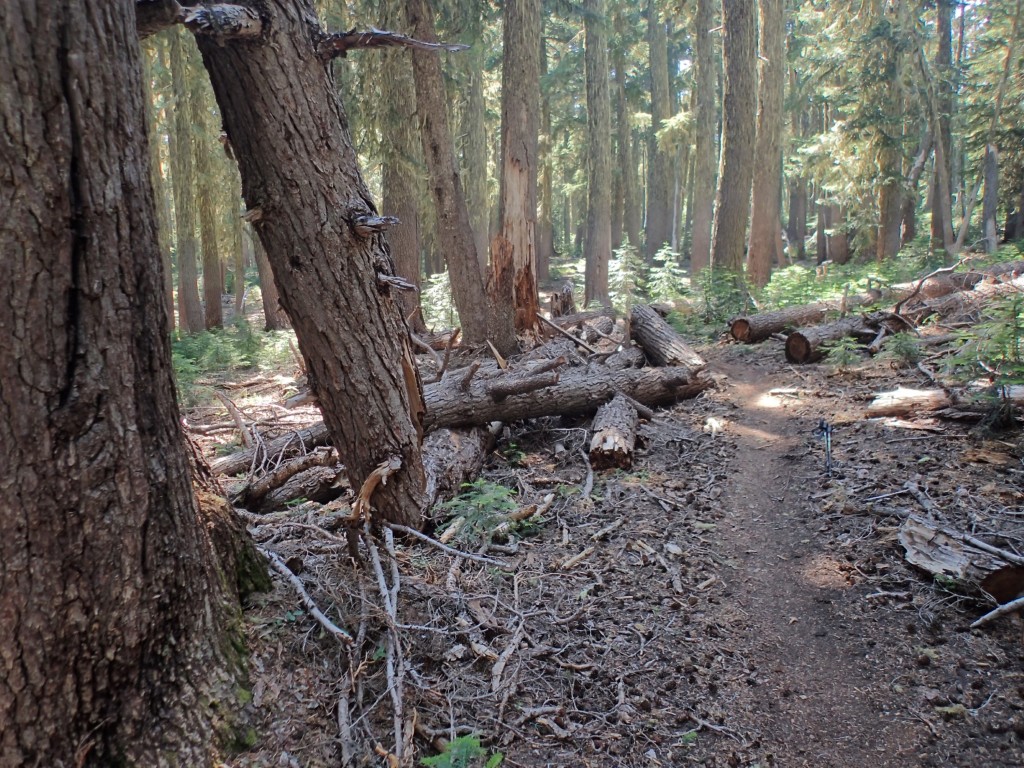 Both are still embedded in a shared root ball. This was two trees, each 3-4′ in diameter at the base and maybe 120-150′ tall, that had grown right next to each other. This lead to entangled root systems, enough so that when the wind blew hard at some point the single root ball was ripped from the ground, and both trees fell together. As they fell, they struck other trees leading to the shattered trunks. The top of one ended up wedged in place between those trees in the first picture, with the jagged end hovering about 3′ off the ground. You see this kind of thing all over, but in this instance the results were particularly dramatic. That root ball is easily 60′ away from the trail: 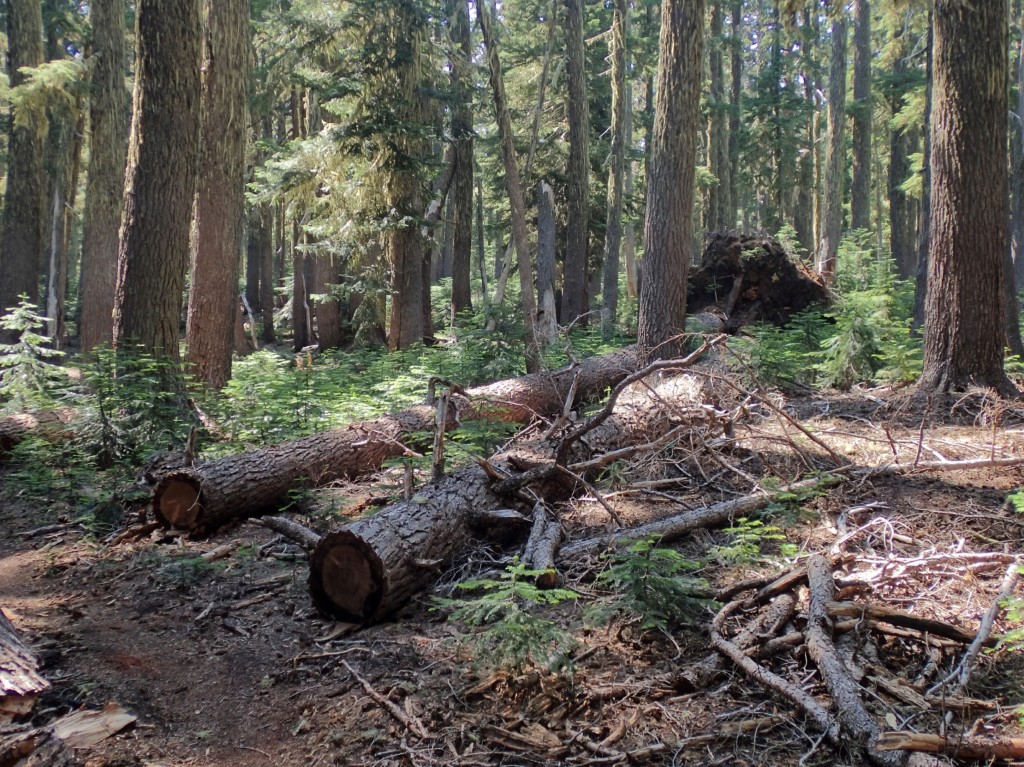 I walked out onto the logs to the root ball and tried to get a photo that showed the size of it all – and the picture still doesn’t convey the scale well. I’m standing on one of the logs. The upper edge of the root ball is still about 5′ above my head. The entire root ball is easily 20′ in diameter: 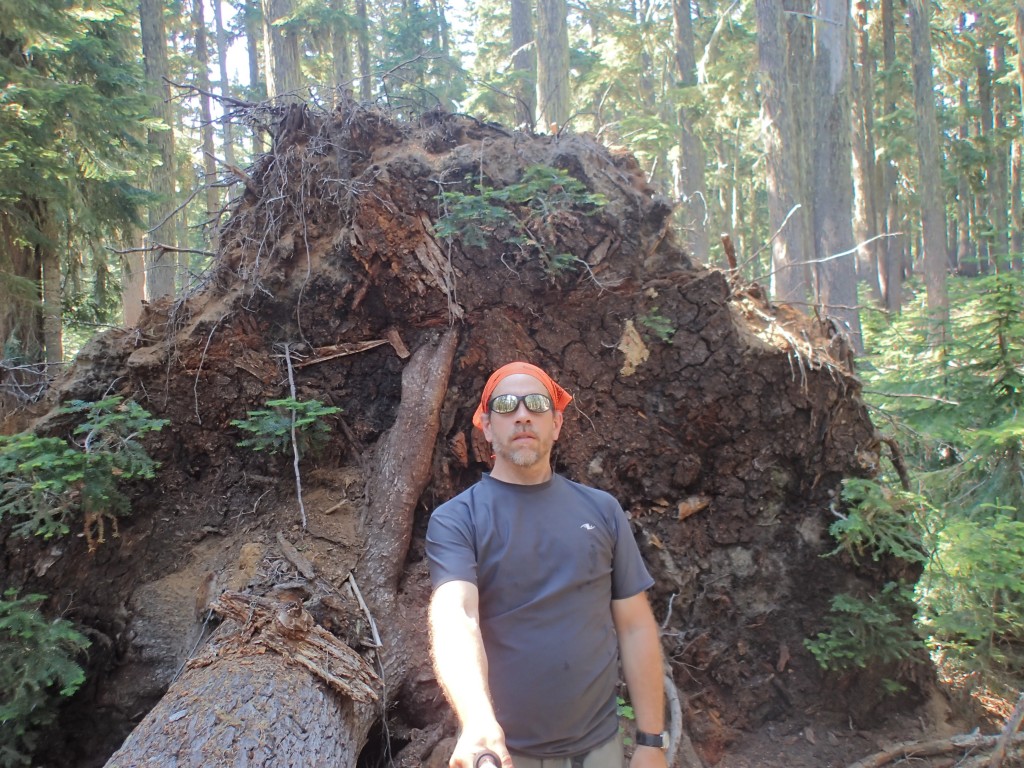 A third tree about 2′ in diameter is crushed under the two larger logs: 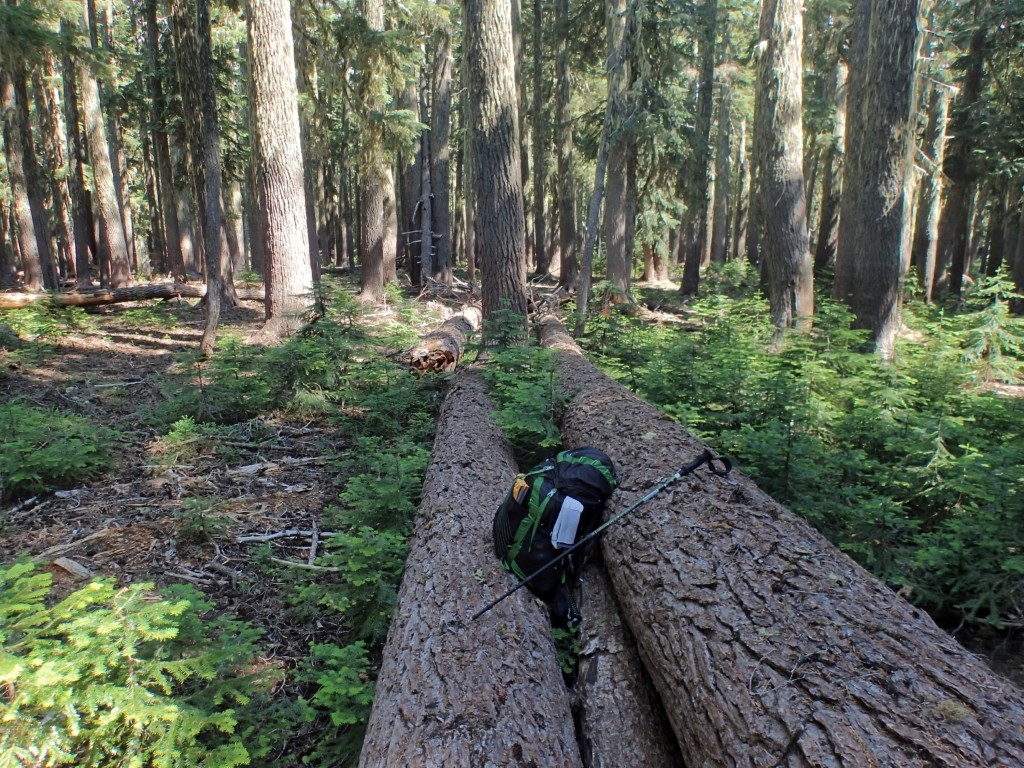 This wasn’t the only extra-dramatic tree carnage I saw. On the next page are two more instances.