Having only explored a small portion of the Lowder Mtn Trail, I returned to take a shot at it from the western trailhead on June 7th. As this end of the trail has not been maintained for some time I was not even sure I would be able to follow it. In the end I was able to follow the route, but it was much harder than I anticipated.

To begin with, the gravel road that leads to this trailhead is apparently unmaintained as well. It was washed out and rutted. My Toyota Sienna did OK, but I had to drive slowly and carefully to avoid the occasional large rock. Much of it was like this: 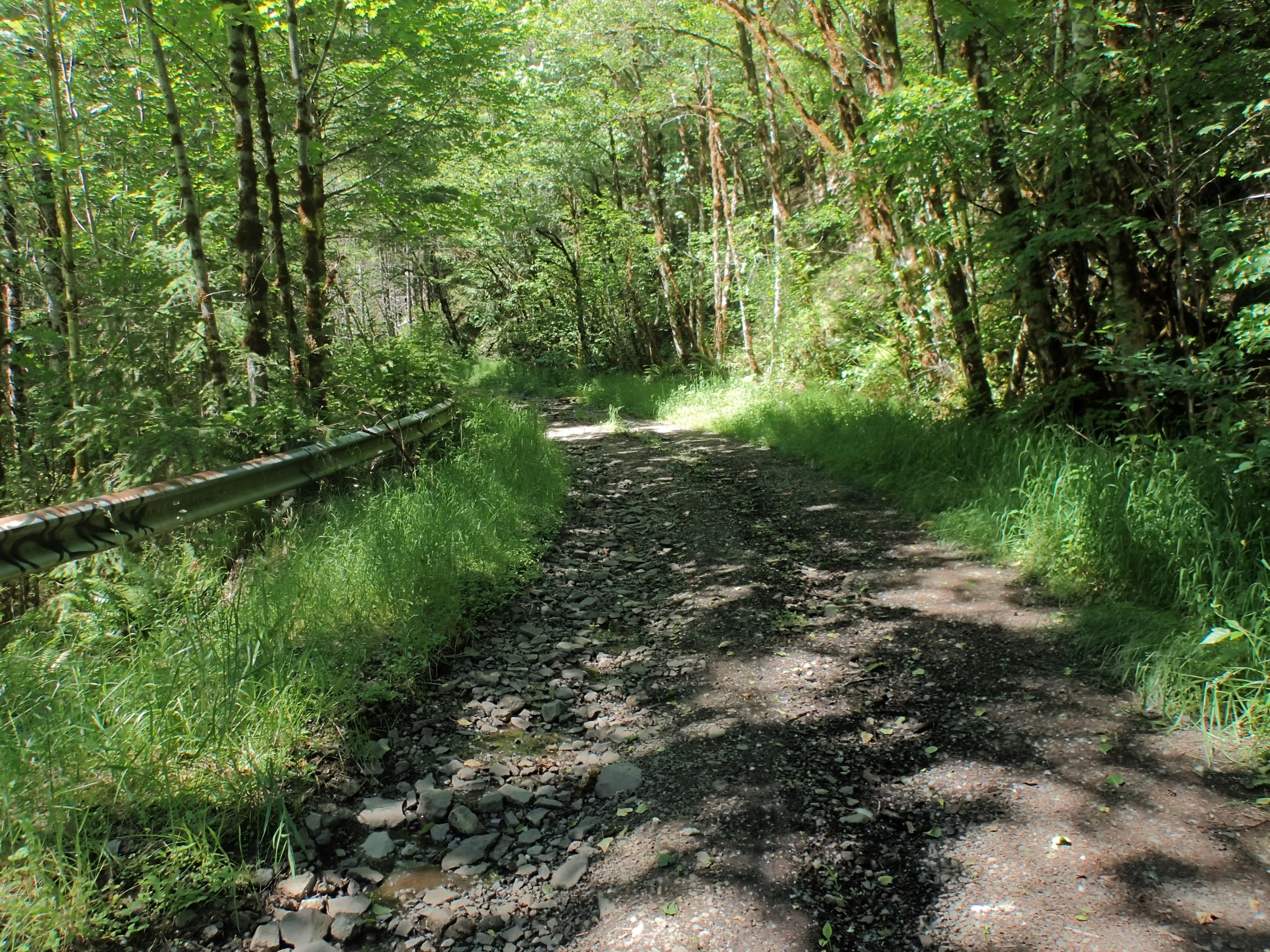 In places the guard rails were tore out. This one had apparently been dragged to the opposite side of the road. The ‘post’ had been rotting and was sheared off where it meets the ground. Others were just pulled up wholesale: 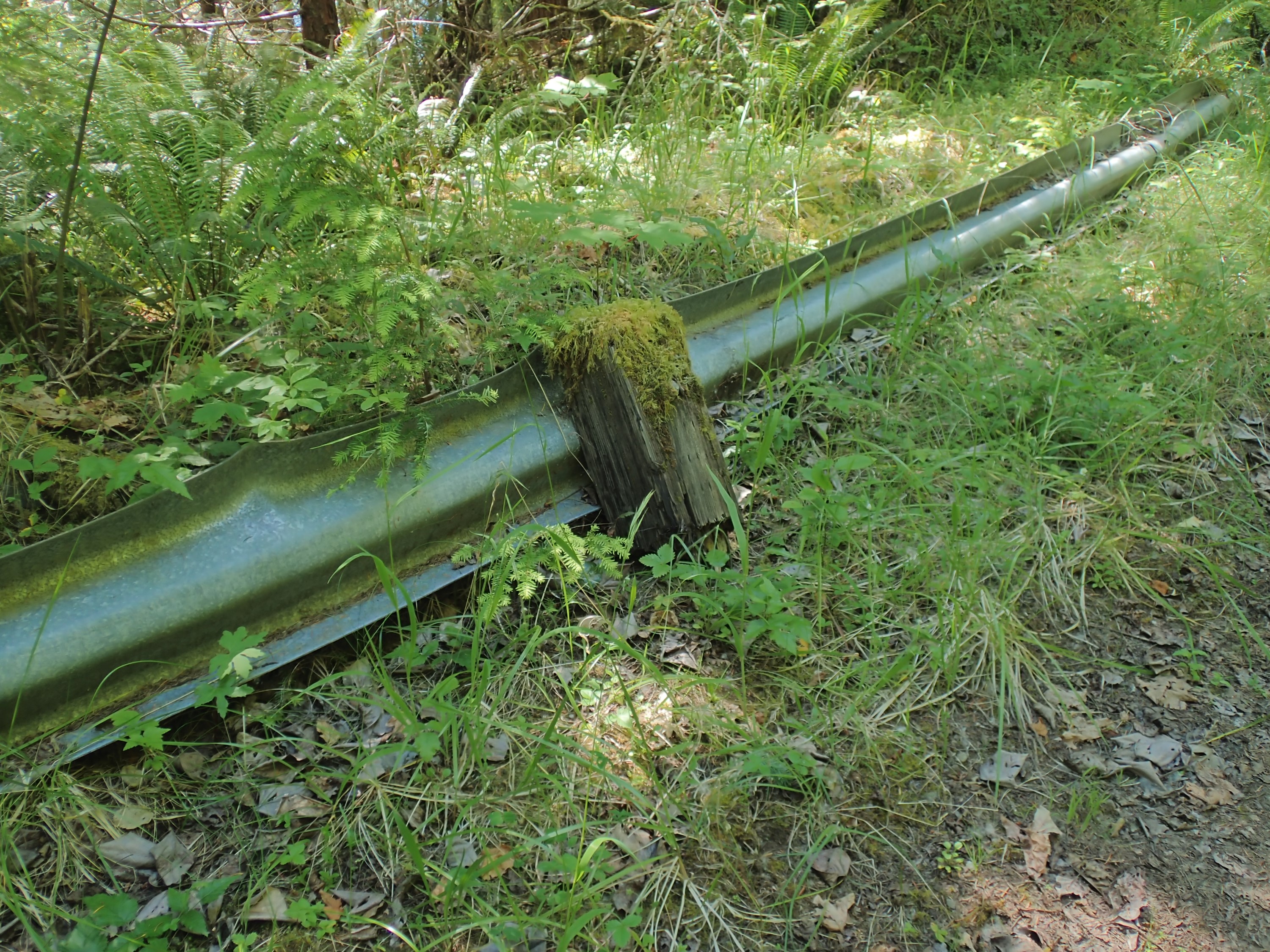 Now and again I ran across ‘puddles’ in the road. My van managed them all until I reached this one about 1000 feet short of the trailhead. When I attempted to drive through I discovered it was deeper than the bottom of my doors would allow. I quickly backed out of it and parked on the shoulder, got my gear together, and hiked the rest of the way to the trailhead: 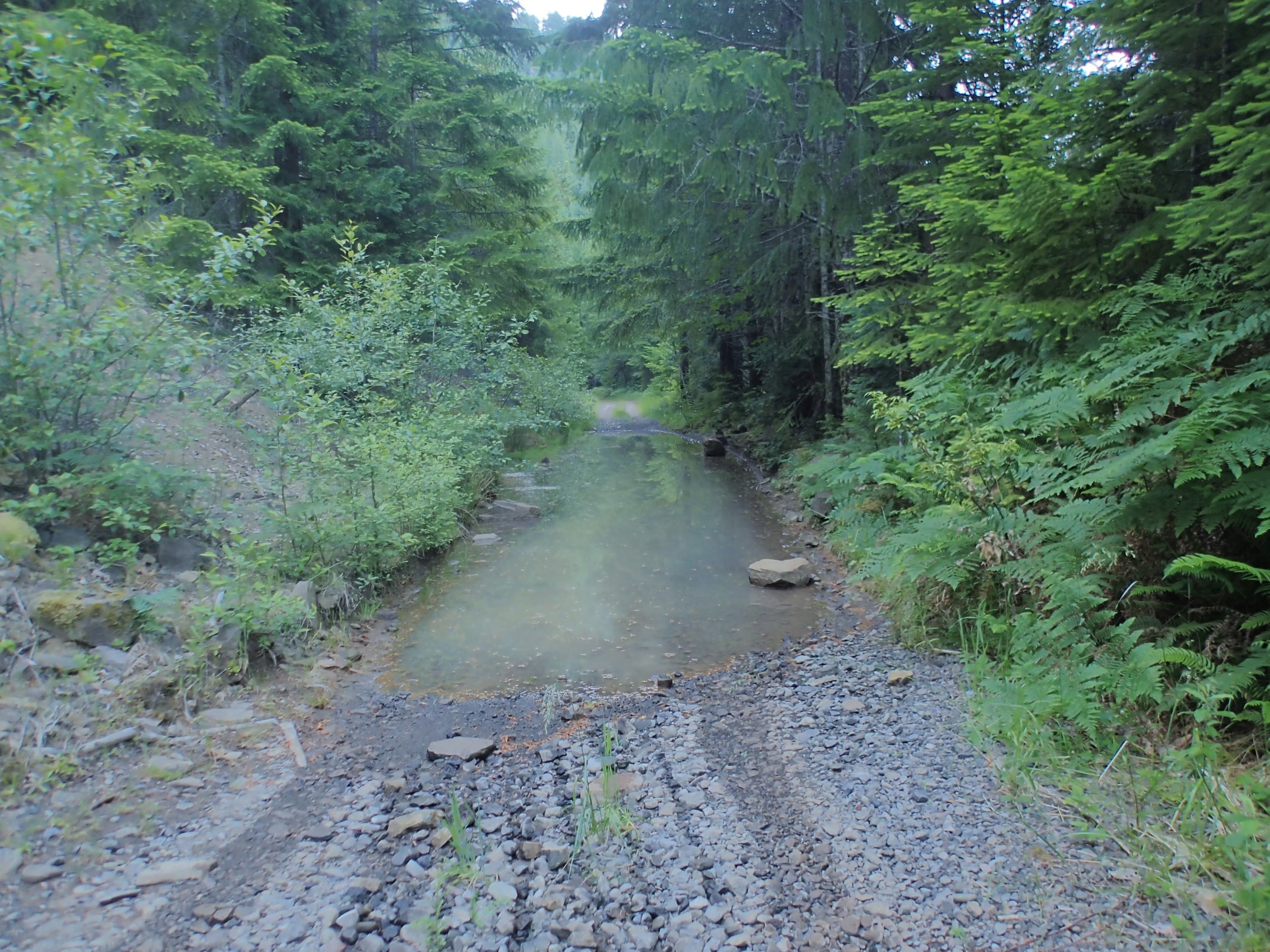 The rhododendrons were just finishing their bloom, so most were without, but some still had delicate pink flowers: 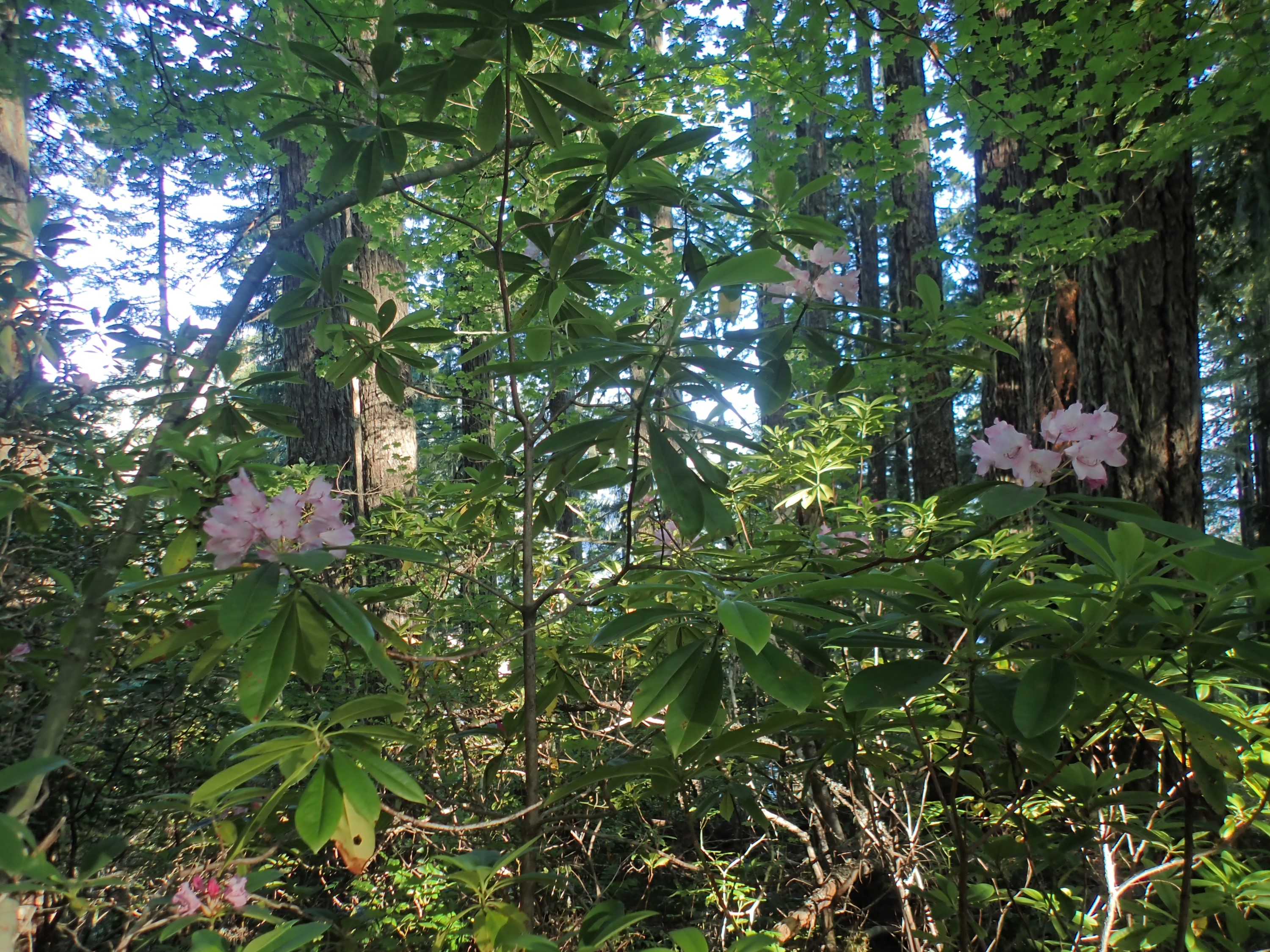 My initial idea was to hike the Lowder Mtn Trail to where it met the Walker Creek Trail (I reached this point in my last hike starting at the other end) and then follow the Walker Creek Trail back to it’s western trailhead. From there I expected to walk about a mile down forest road NF-541 to the point where it crossed the Lowder Mtn Trail allowing me to make a loop hike. But when I got to the road on my way up, I was confronted with the first hint that my plan might not work out.

I found the road. Sort of. This is looking north down the road: 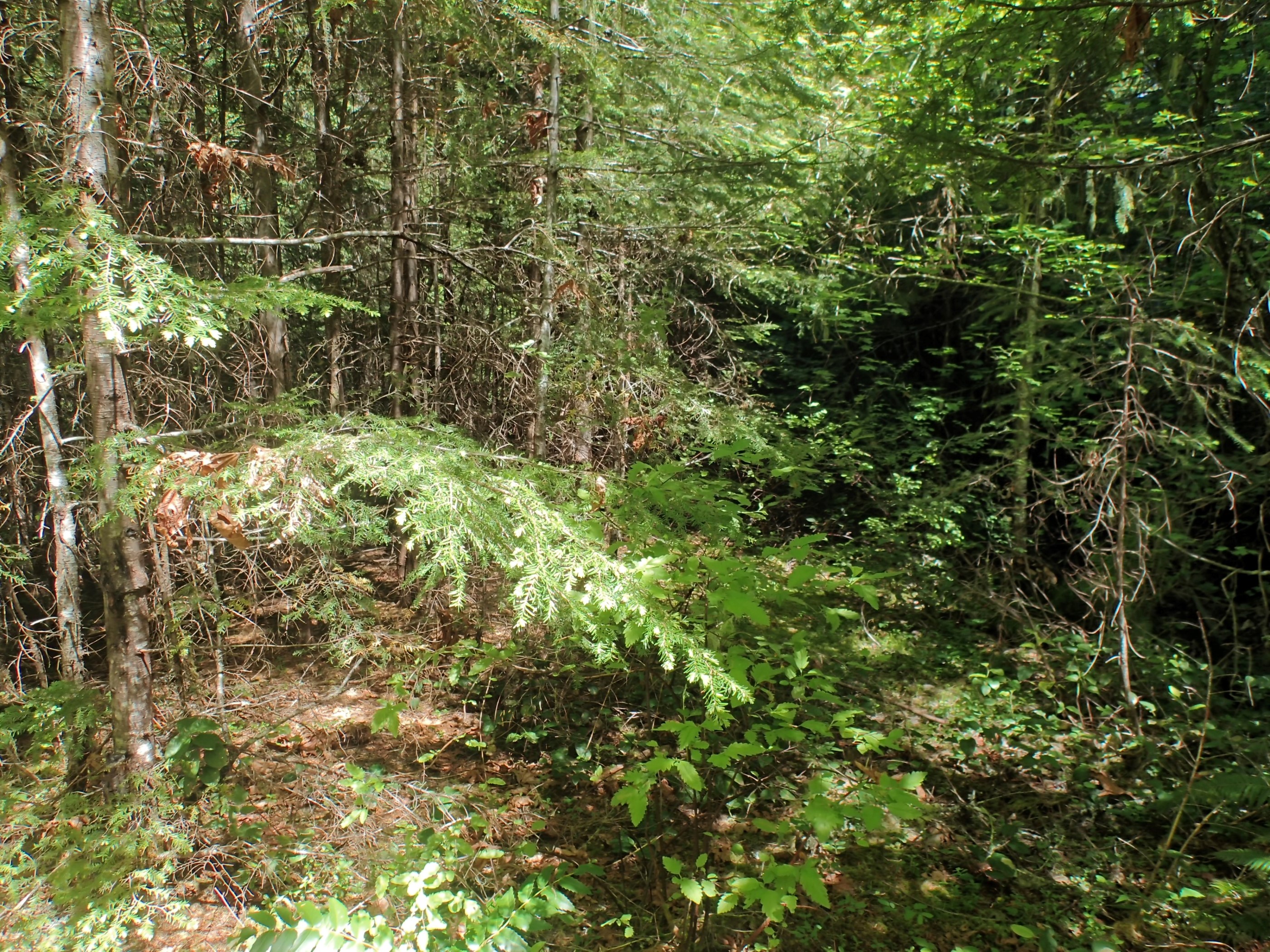 This is looking south. Needless to say, it isn’t much of a road anymore. In fact, the small trees filling it in were so dense it would actually be harder to hike the road than to hike 20 feet off to the side. It was unusable for my purposes. At this point, I knew the hike was going to be an out-and-back, which would halve the amount of trail I could cover. A hike is a hike though, so I kept going: 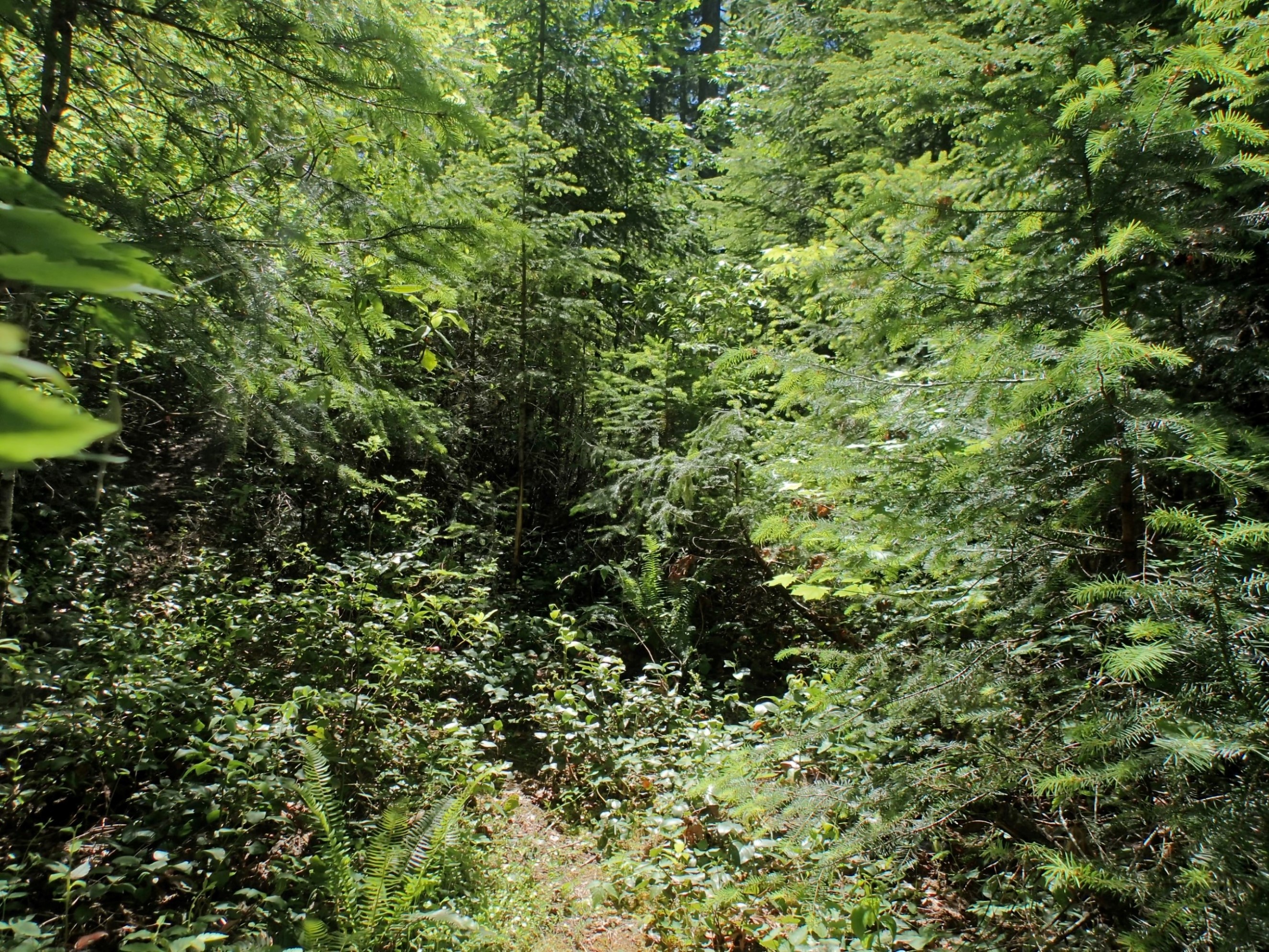 The ‘trail’ climbs the ridge, mostly right along the top edge, so often the terrain fell away dramatically on both sides: 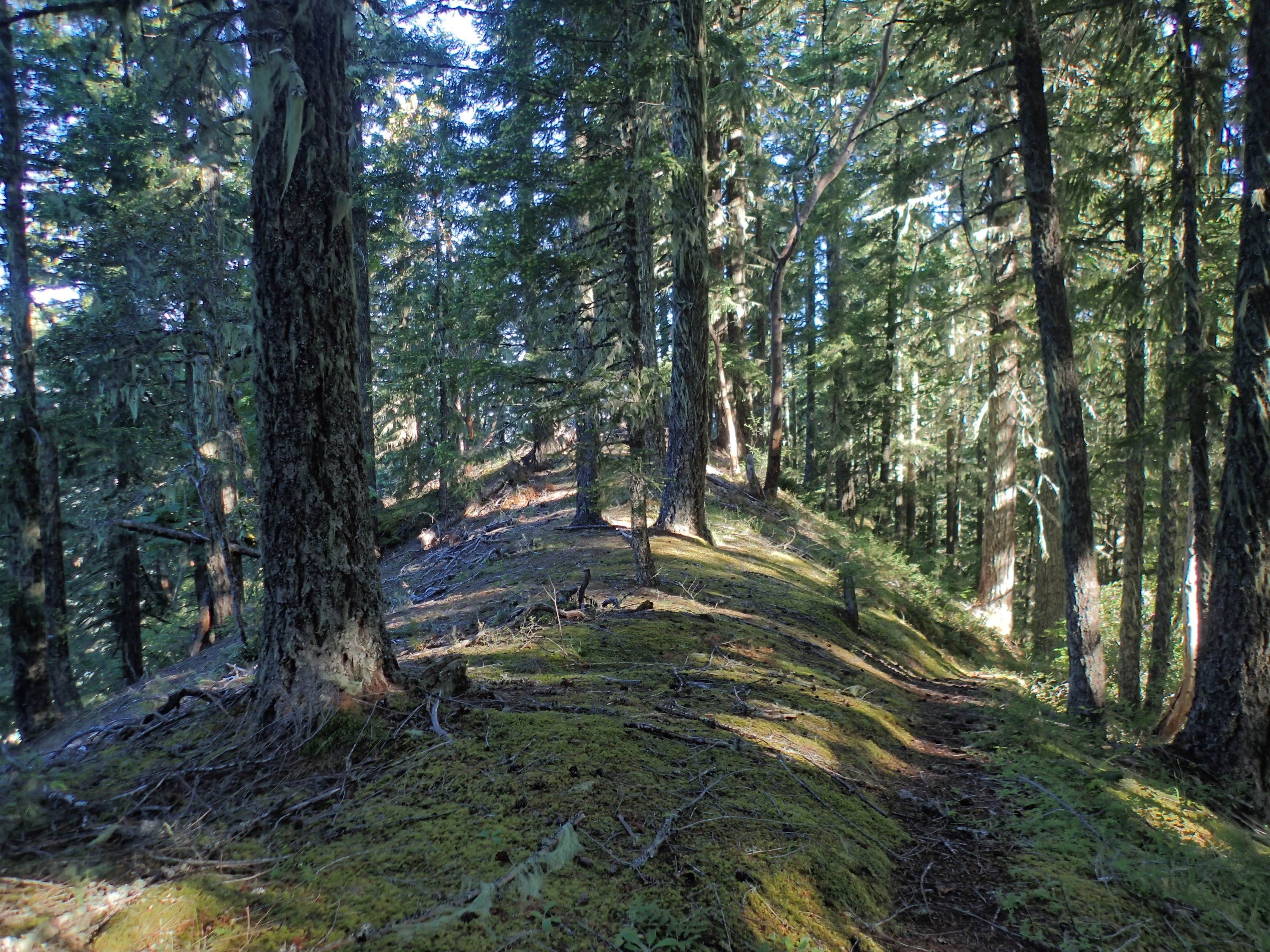 A section of the trail was graced with manzanita, some of which were quite large: 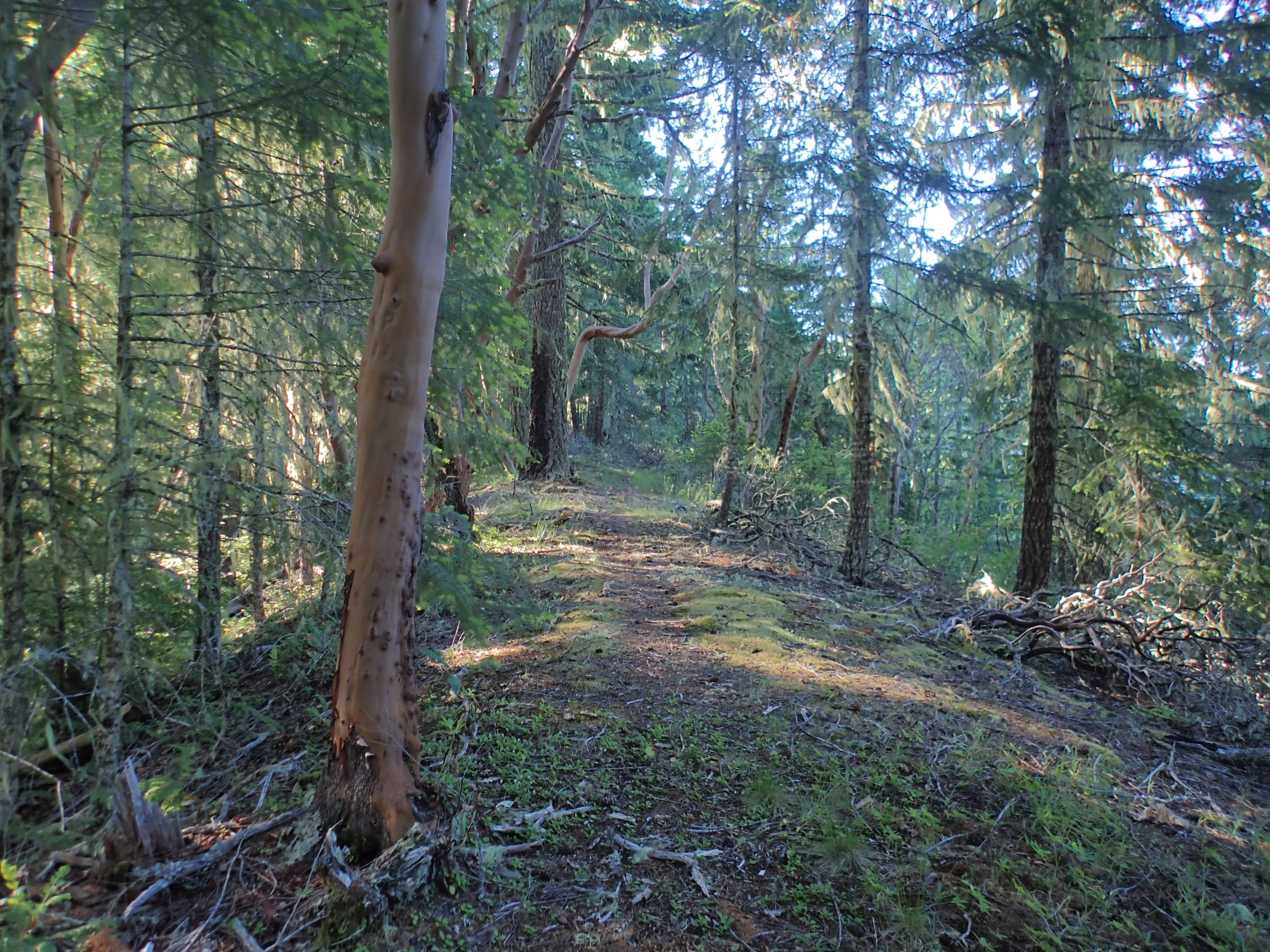 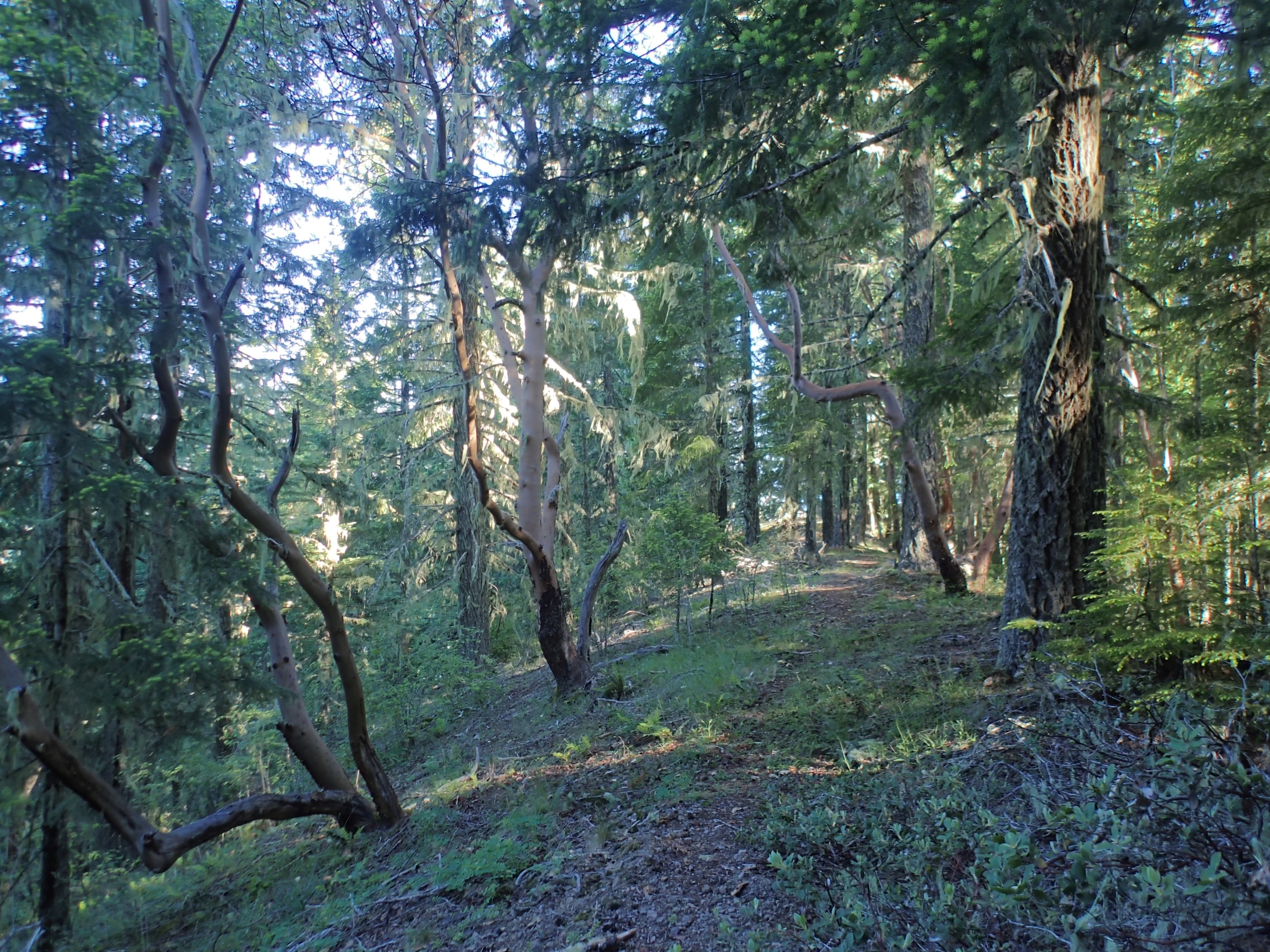 Other stretches were overgrown with rhododendron: 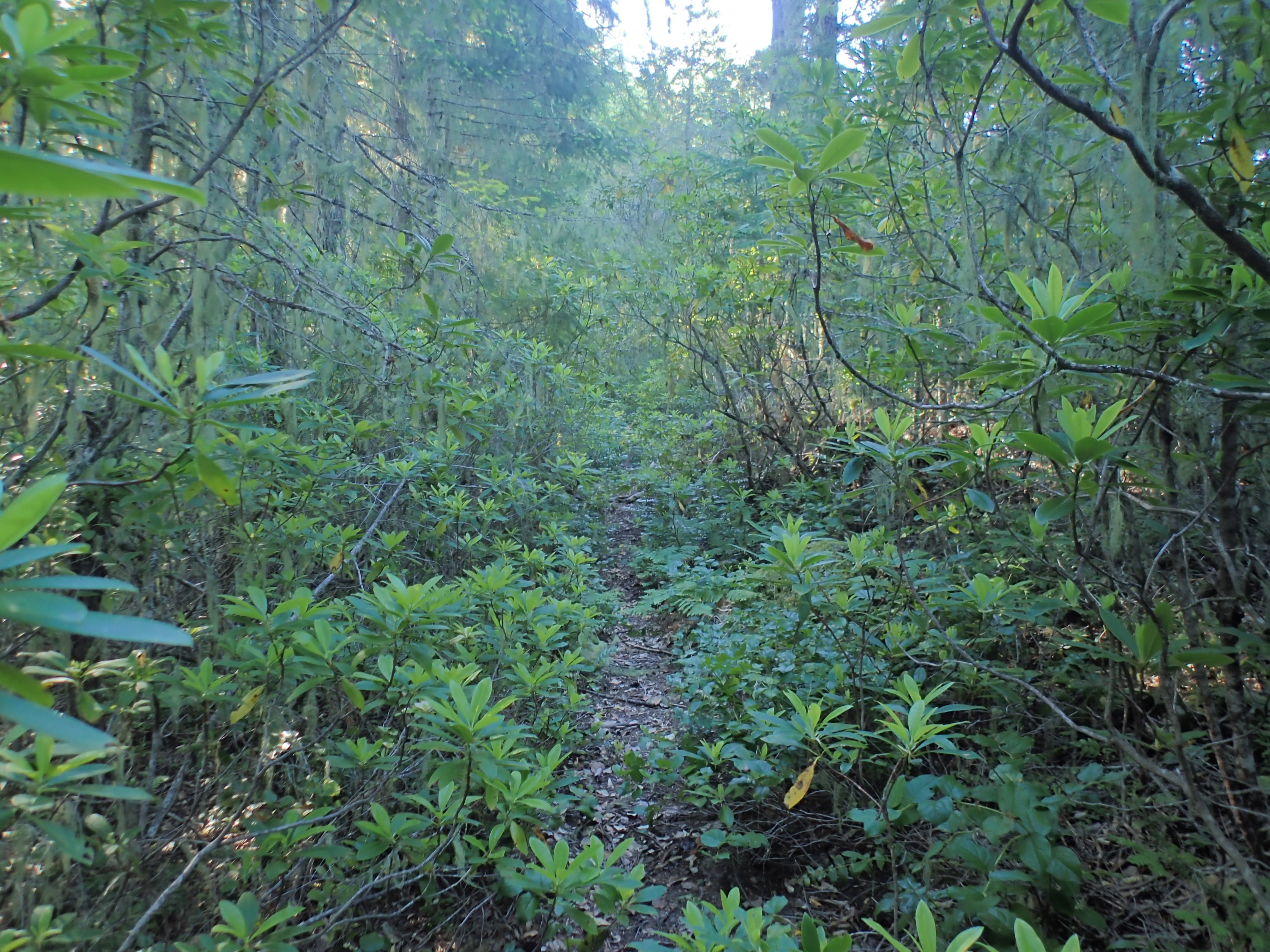 I spotted this spider web along the way. It is hard to see, but the central feature of the web was an inverted bowl shape. You can vaguely see the curve here. A lot of the web and supporting structure is not visible as it did not photograph well in any of the many pictures I took. This is the best one.

I don’t know what kind of spider this is. I didn’t note what the spider itself looked like and apparently there are several species that build webs similar to this: 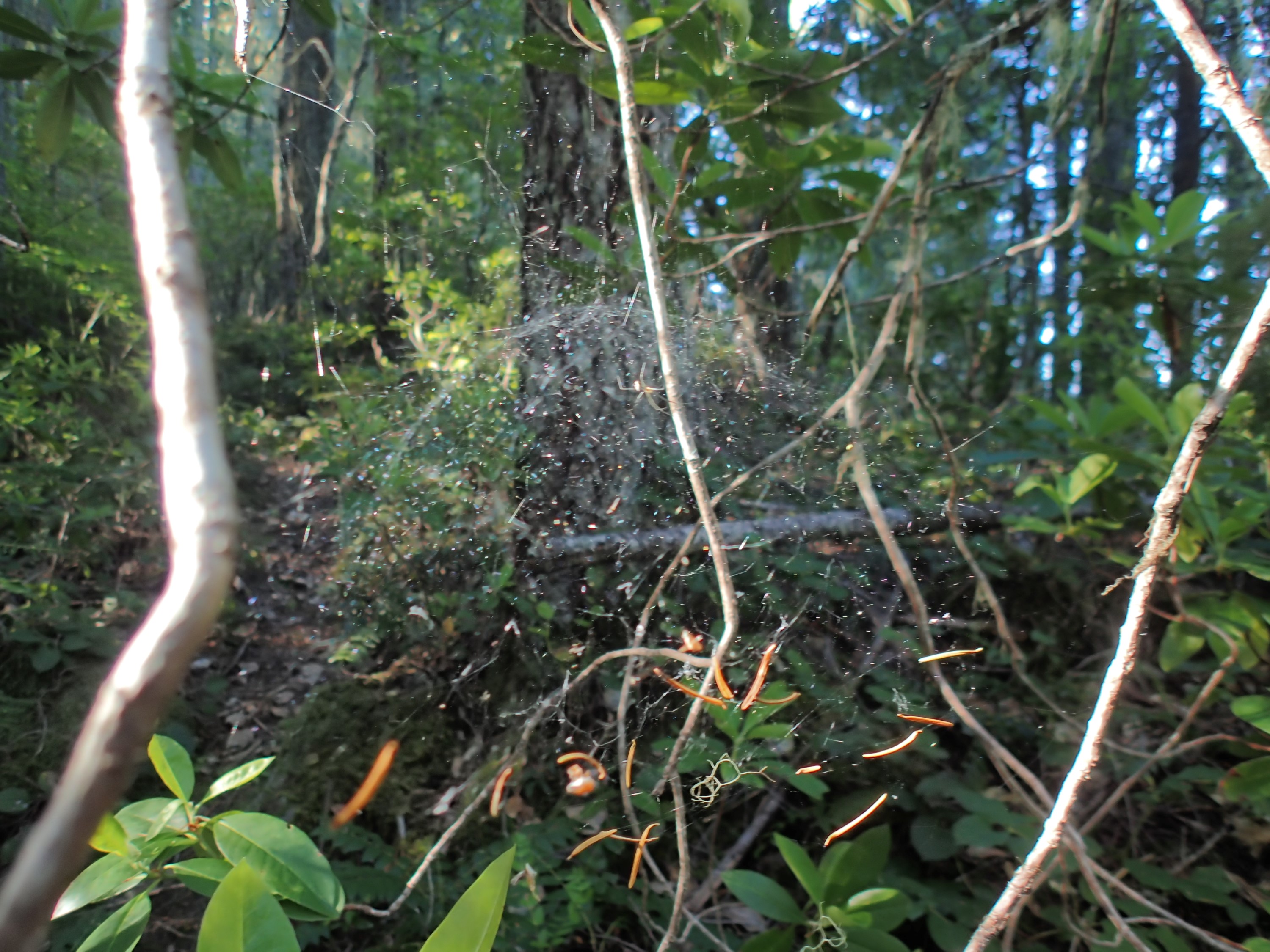 I spotted this centipede (or millipede?), going about its business:

Sometimes the obstacles were unexpected but obvious: 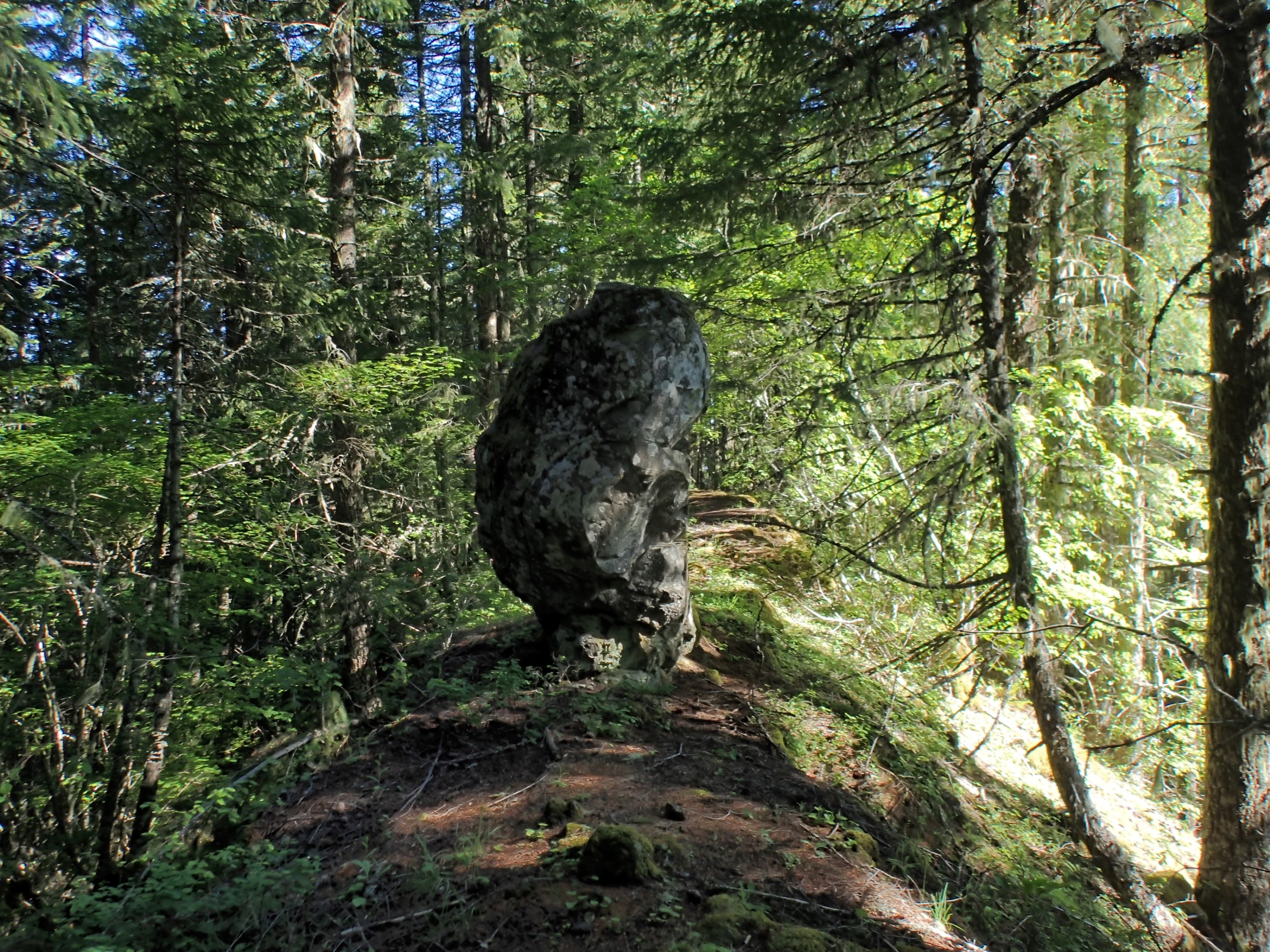 But the farther I walked, the fainter the trail grew: