Finally, after climbing this uncertain trail from about 1700′ ASL (above sea level) at the trailhead to approximately 5100′ ASL the trace reached the top of the ridge and flattened out. In addition, it became quite a bit easier to follow. I immediately noticed the remains of a sign where the trail split: 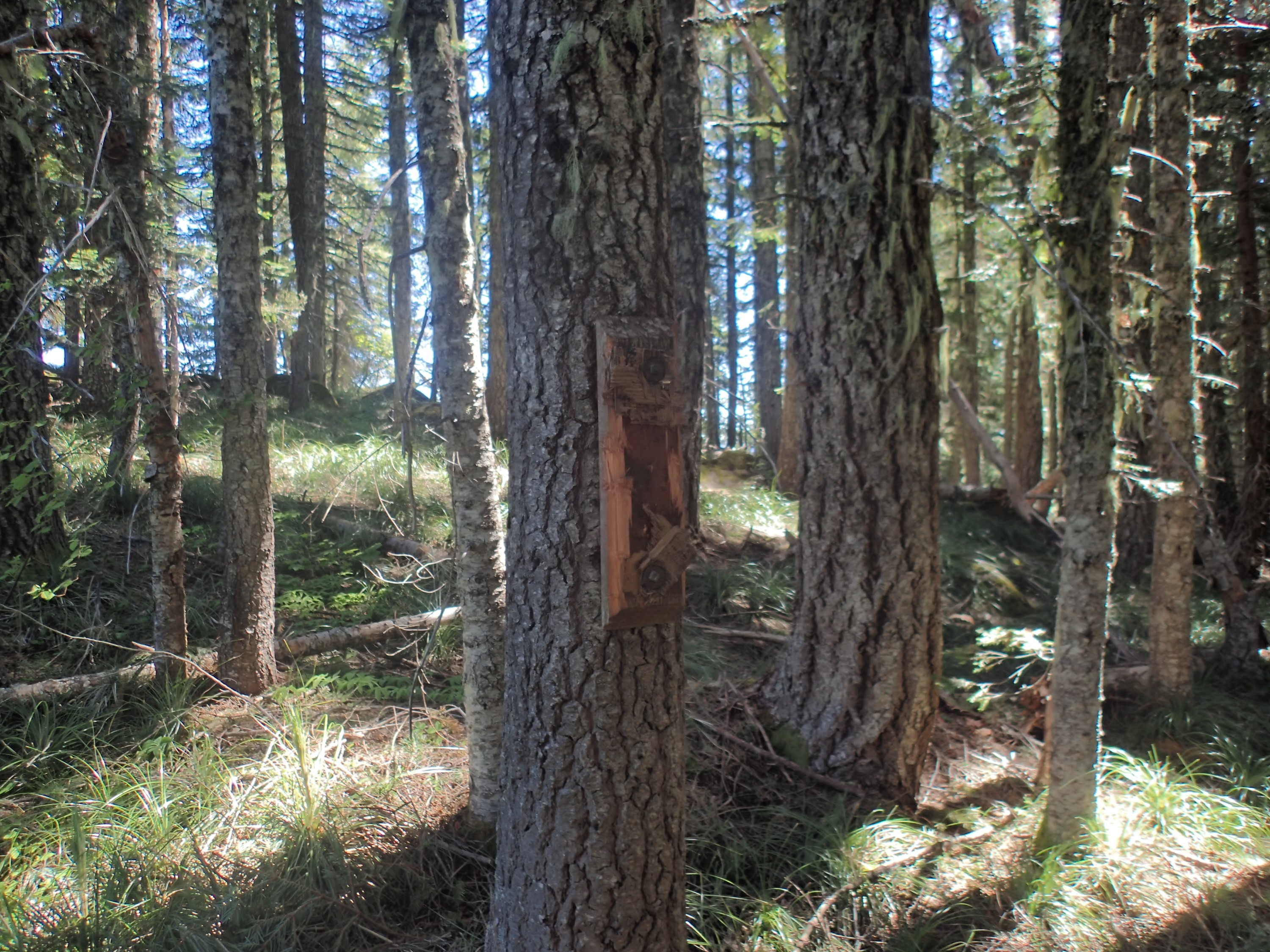 On the ground were two fragments. I “assembled” them and leaned them against the tree: 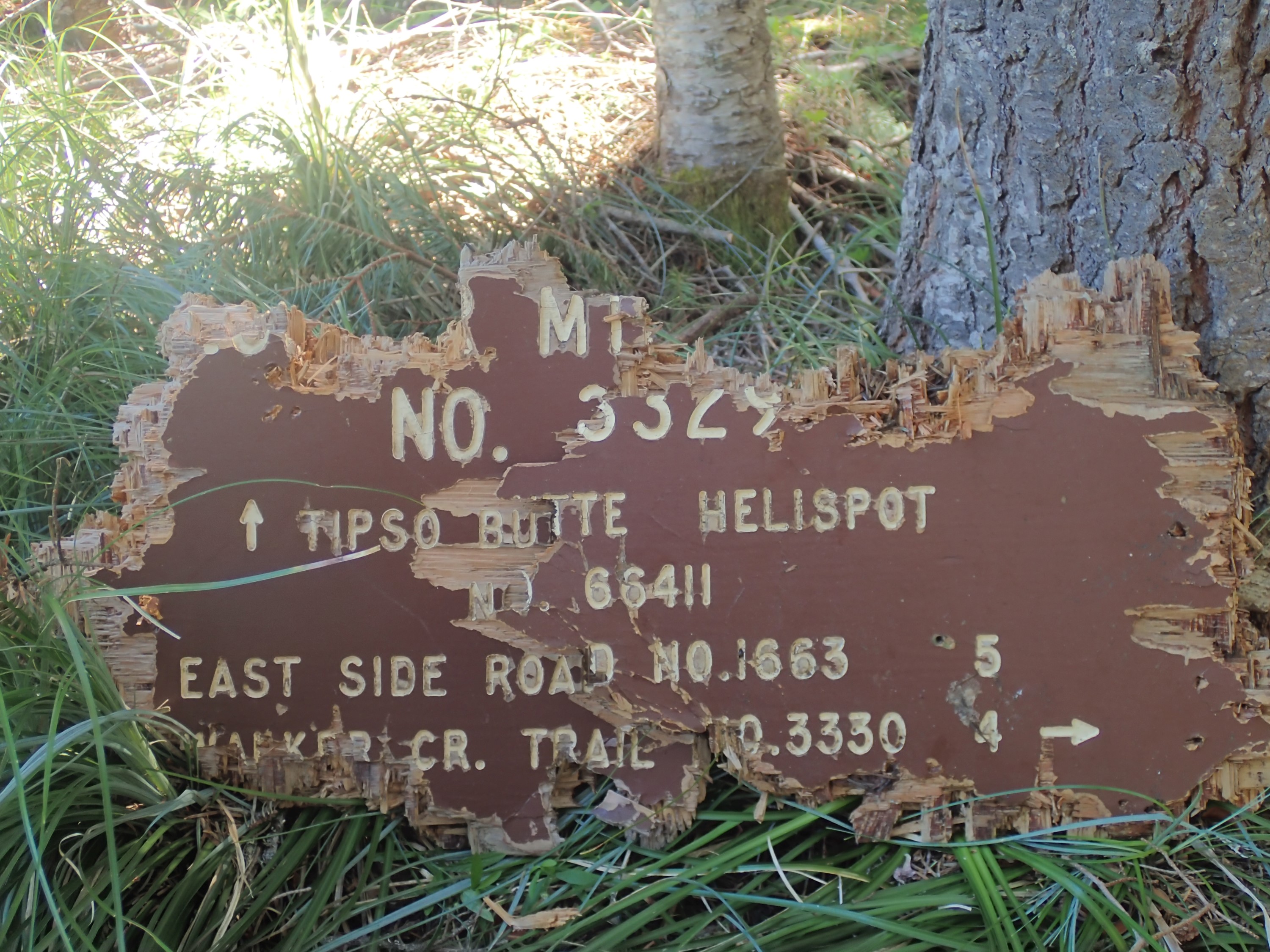 On the other side of the trail about 15′ away I spotted an outhouse in great disrepair: 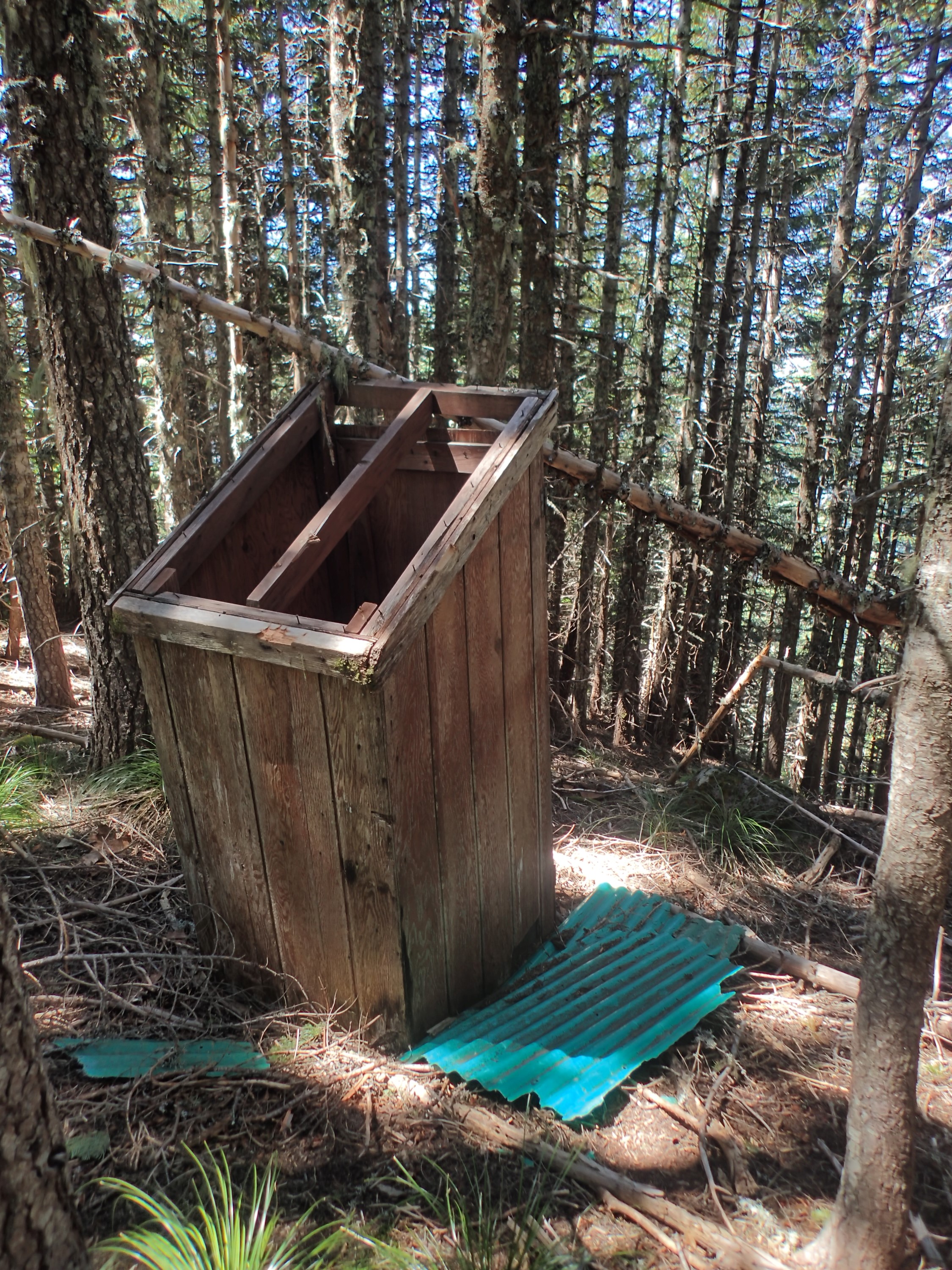 Following the short spur trail I quickly reached a rocky outcropping with a fantastic view: 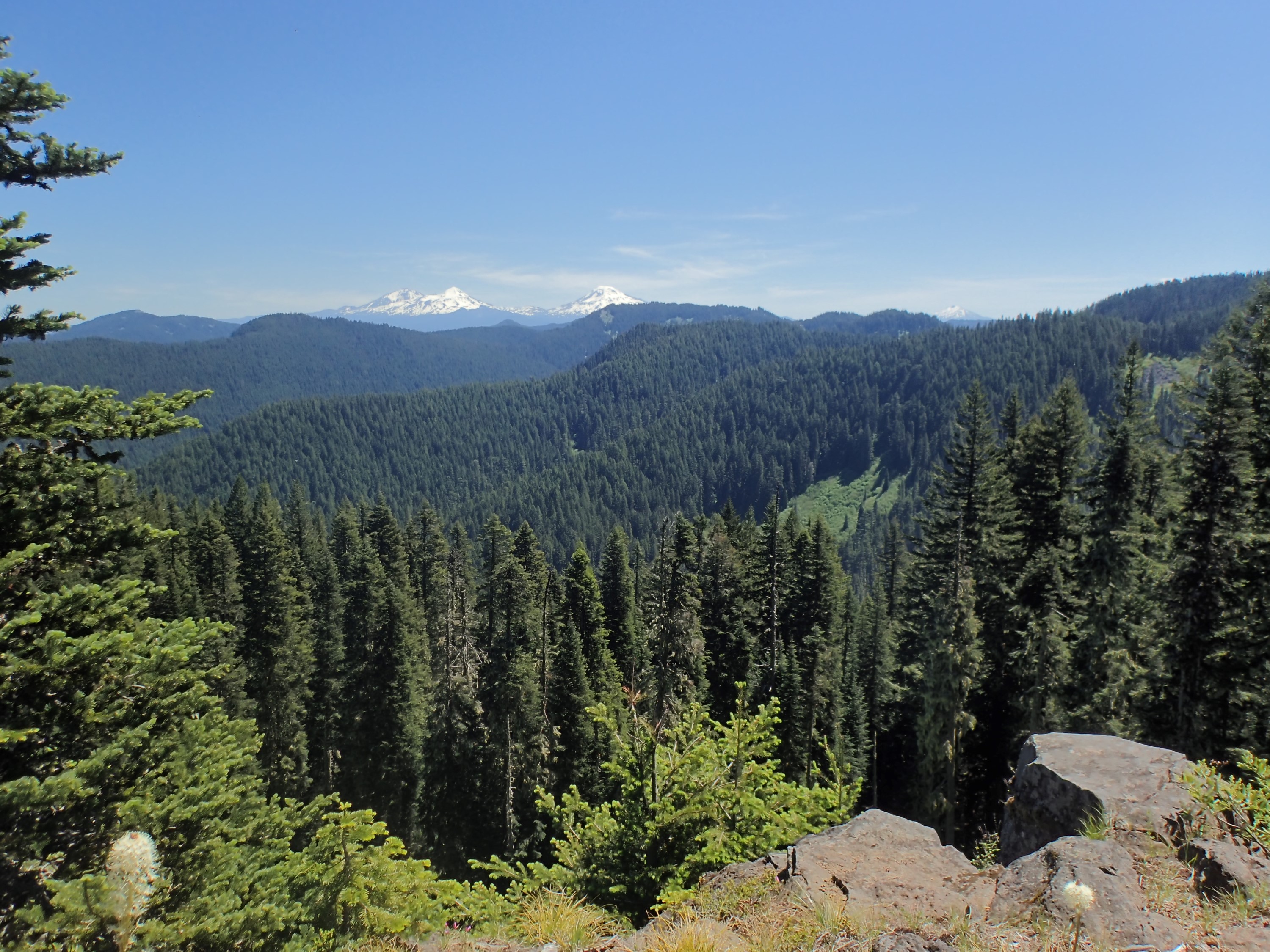 From left to right are the Three Sisters – Faith, Hope, and Charity: 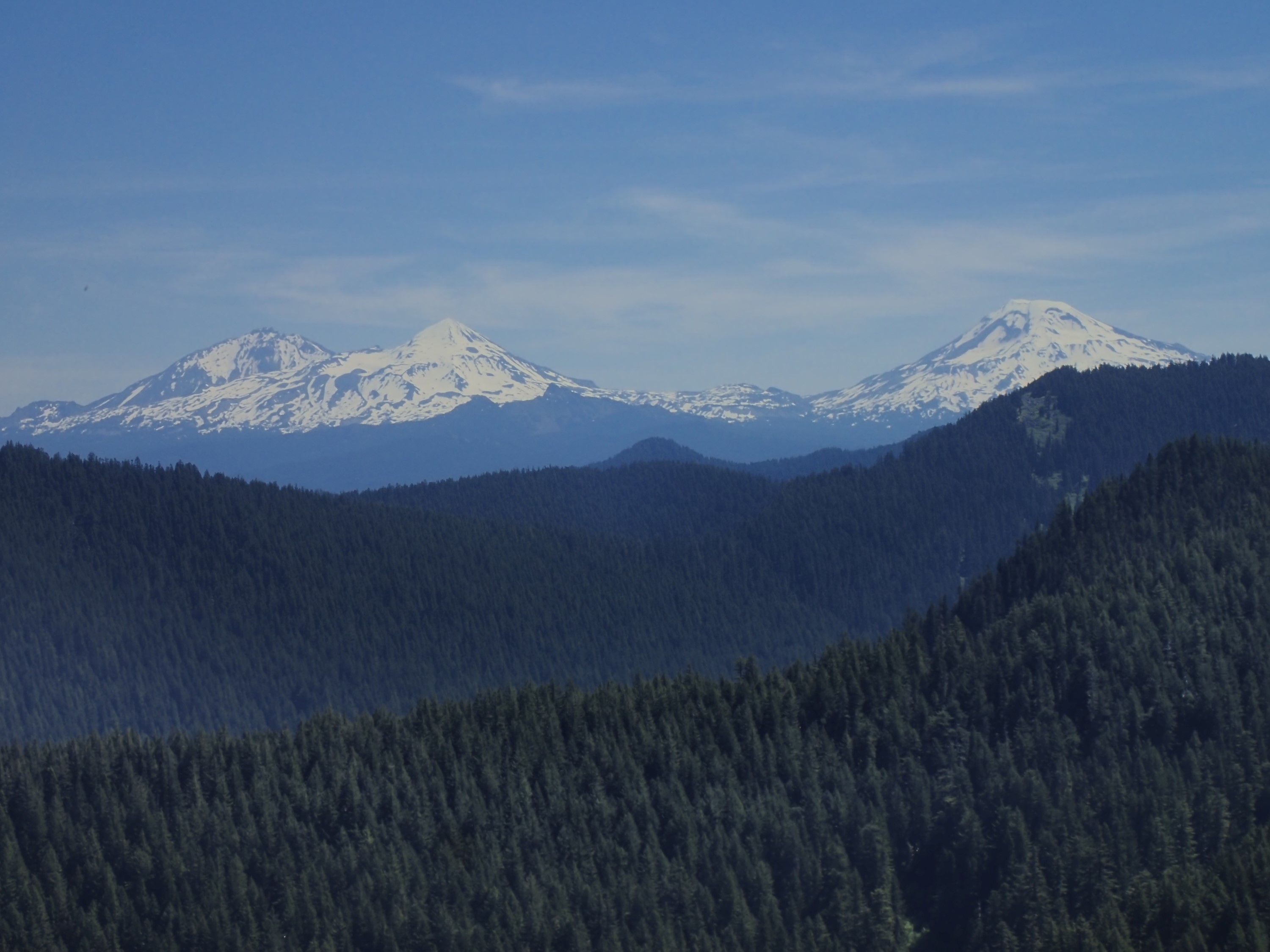 Looking more to the east I spotted Mt. Bachelor: 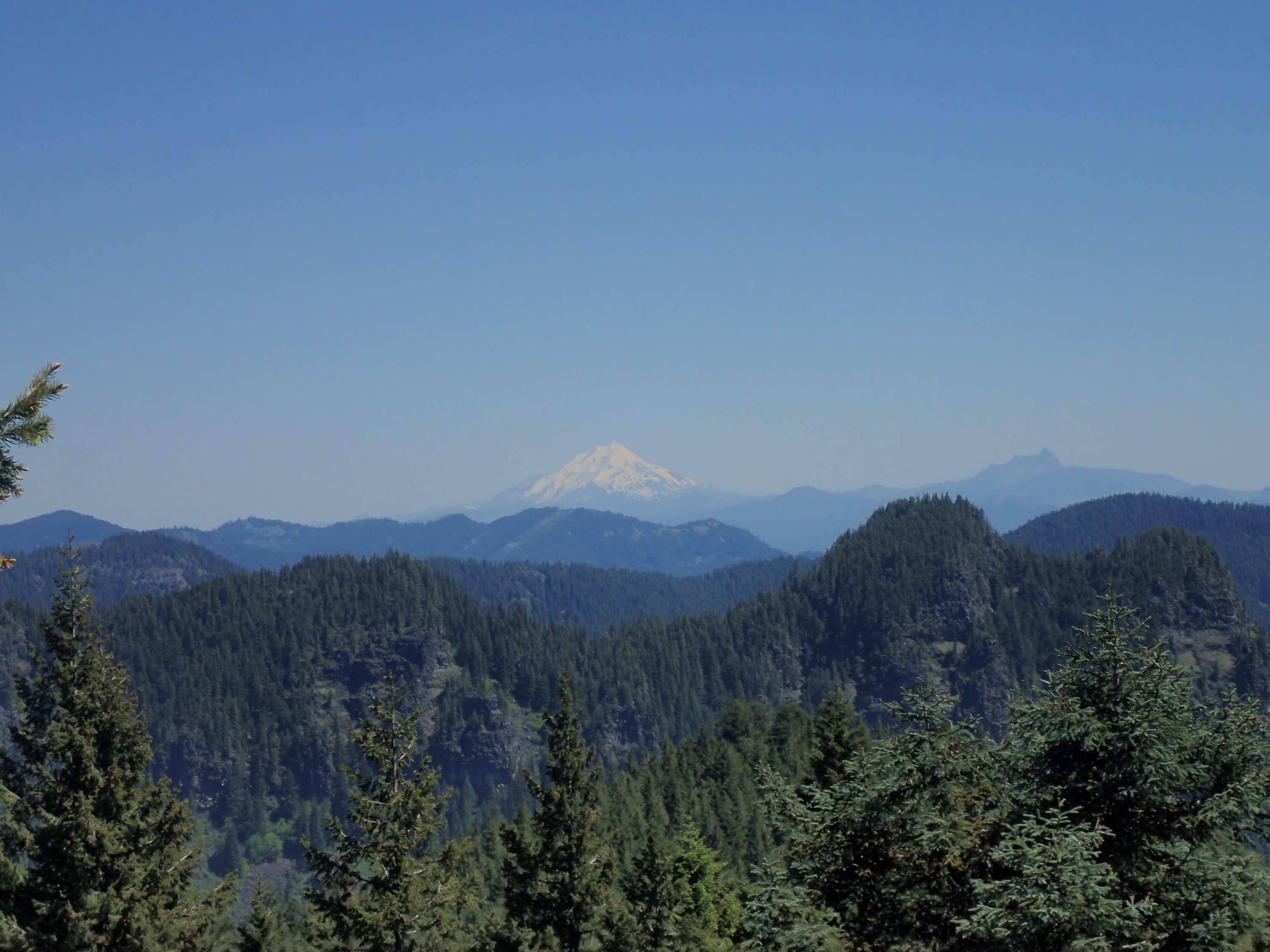 And to the north, M. Washington: 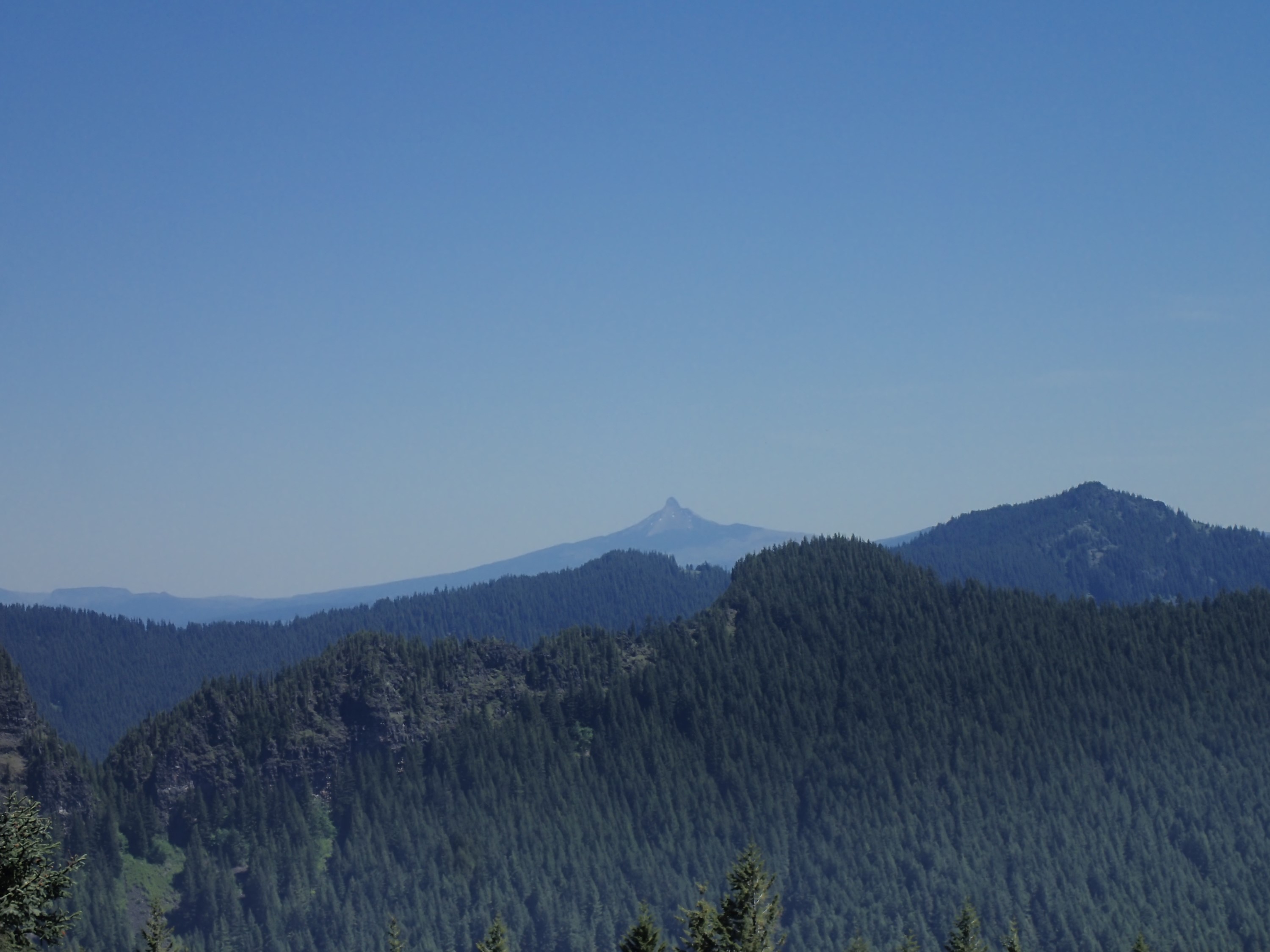 I also spotted a USGS benchmark: 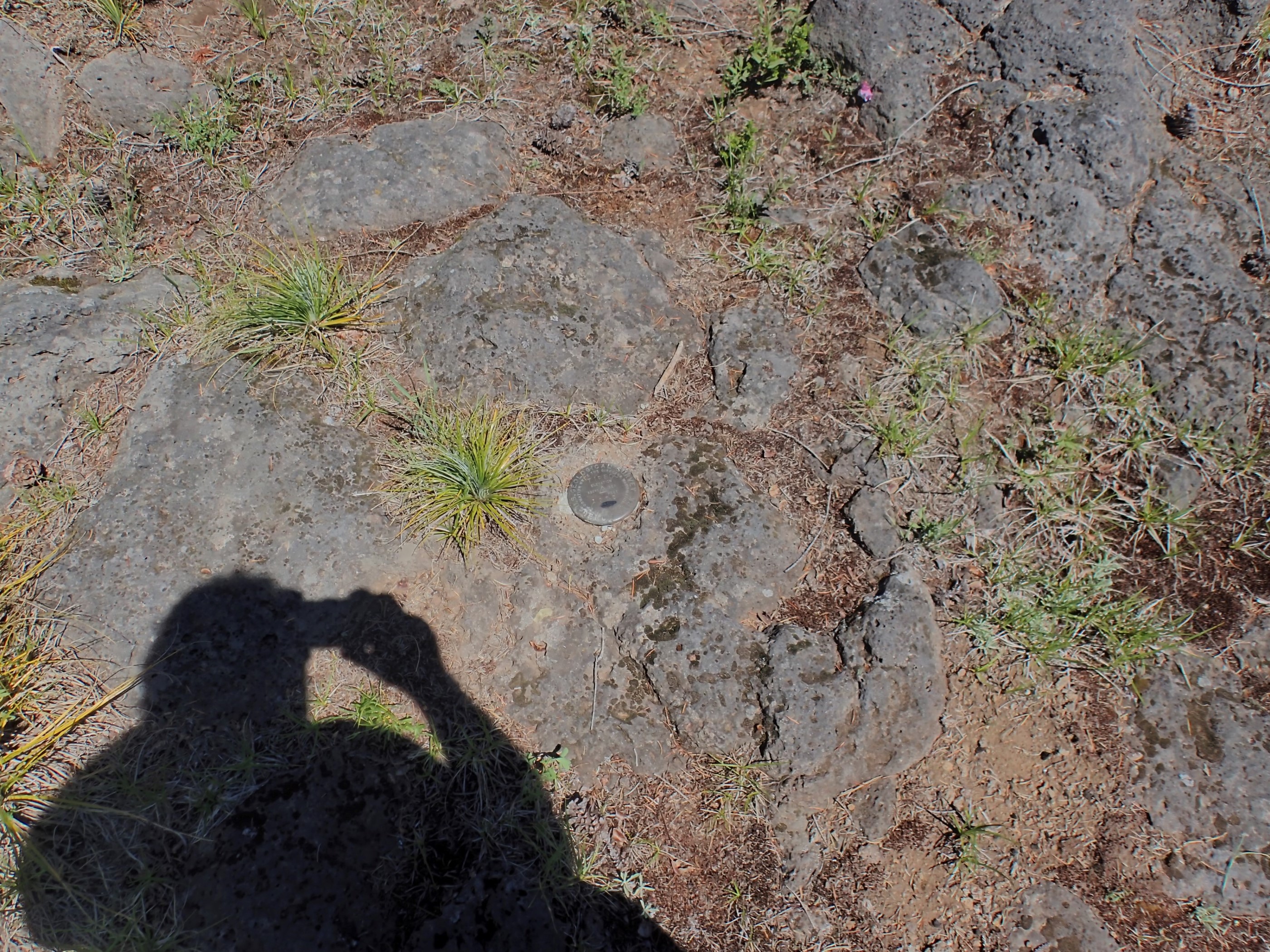 A benchmark is a marker that identifies a point of known elevation. This one was placed in 1955.

At one time there was a fire lookout here. Built in 1934, it was what was referred to a an “L-4 cab”, or lookout version 4 cabin. I cannot find much information, but in all likelihood it was about 15′ square and was similar to the L-4 built at Rebel Rock, with shutters that opened upward like a visor (though it may have been somewhat different, since the Rebel lookout was built 21 years later in 1955). The lookout was eventually destroyed and removed in 1966 and I saw no trace of it.

When surveyors place a benchmark they will usually place two other markers nearby called reference marks. These will usually be within 50′ of the benchmark at right angles to each other. These have an arrow pointing to the benchmark and help to locate it in case it is obscured, destroyed, or removed. The benchmark usually has the station name and date it was placed stamped into it, but not the elevation.

As for this being a helispot, I cannot imagine it being a place to land, so much as a place to lower something to (or lift something from) with a cable. Even if you removed all the nearby trees and brush I don’t think there is enough flat space to land a helicopter safely. However, as I was unable to learn anything further, I’m just guessing. 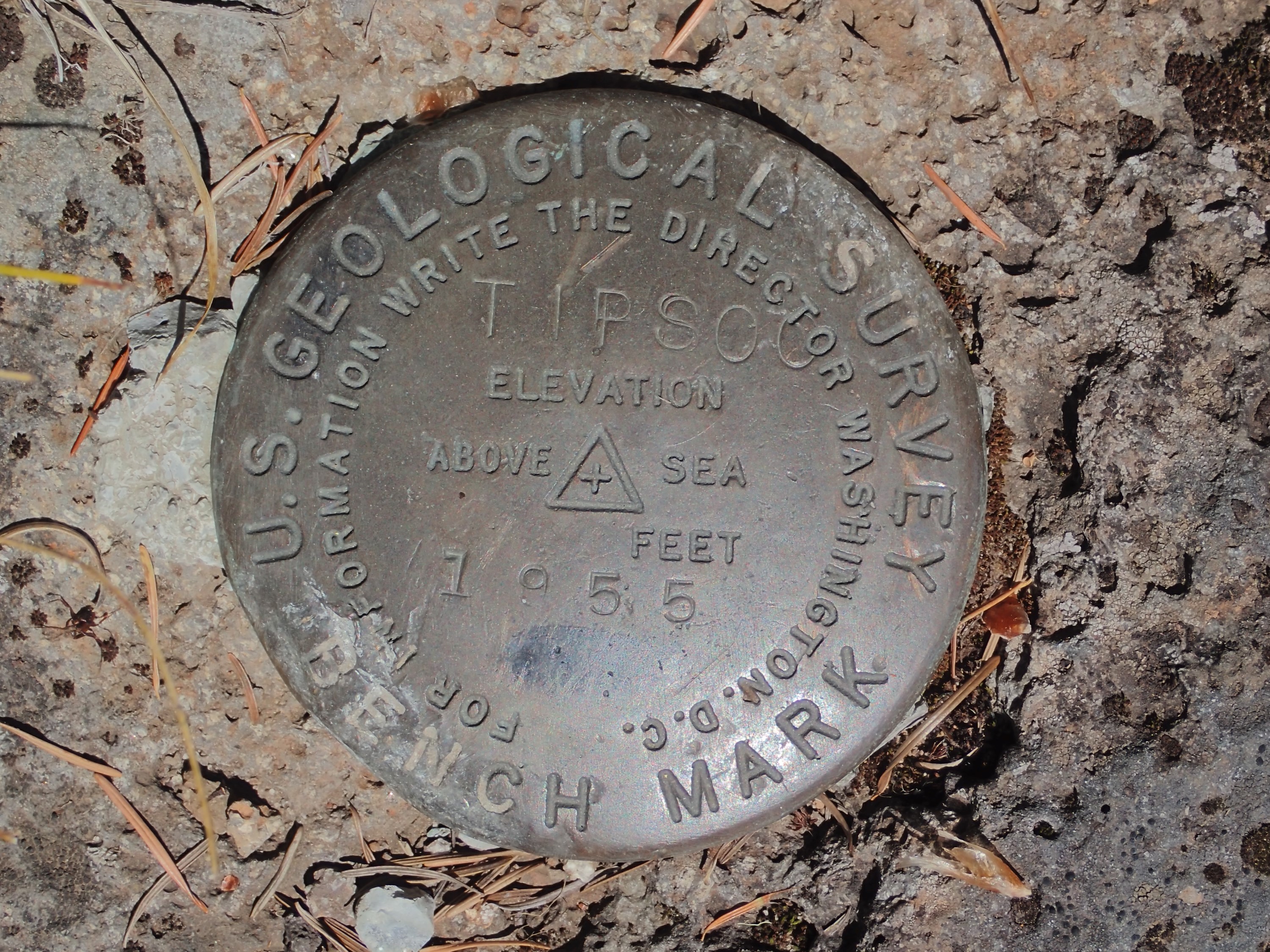 About 15 to the SE I spotted one of the reference marks. I did not find the other, but then I didn’t look very hard either: 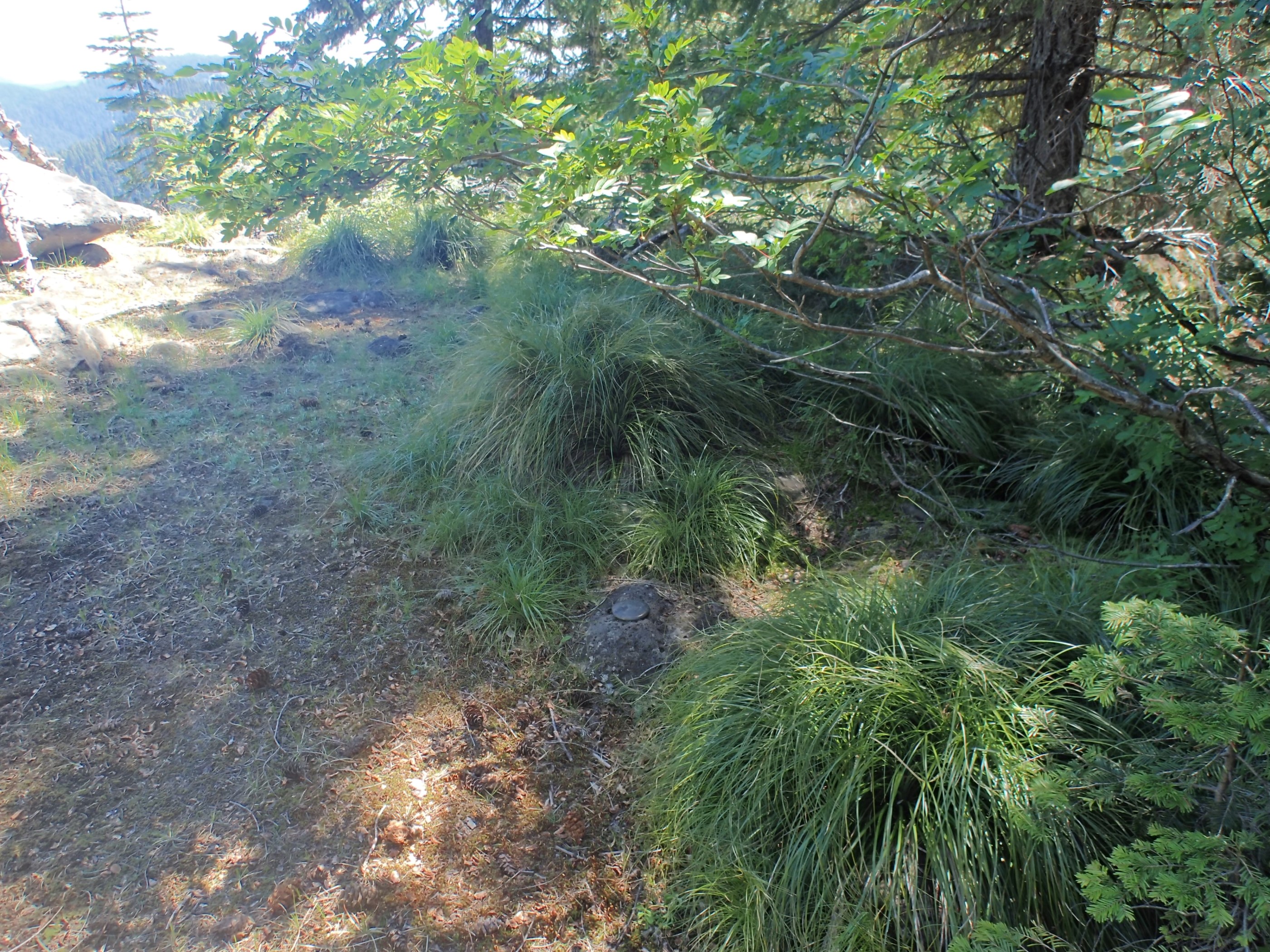 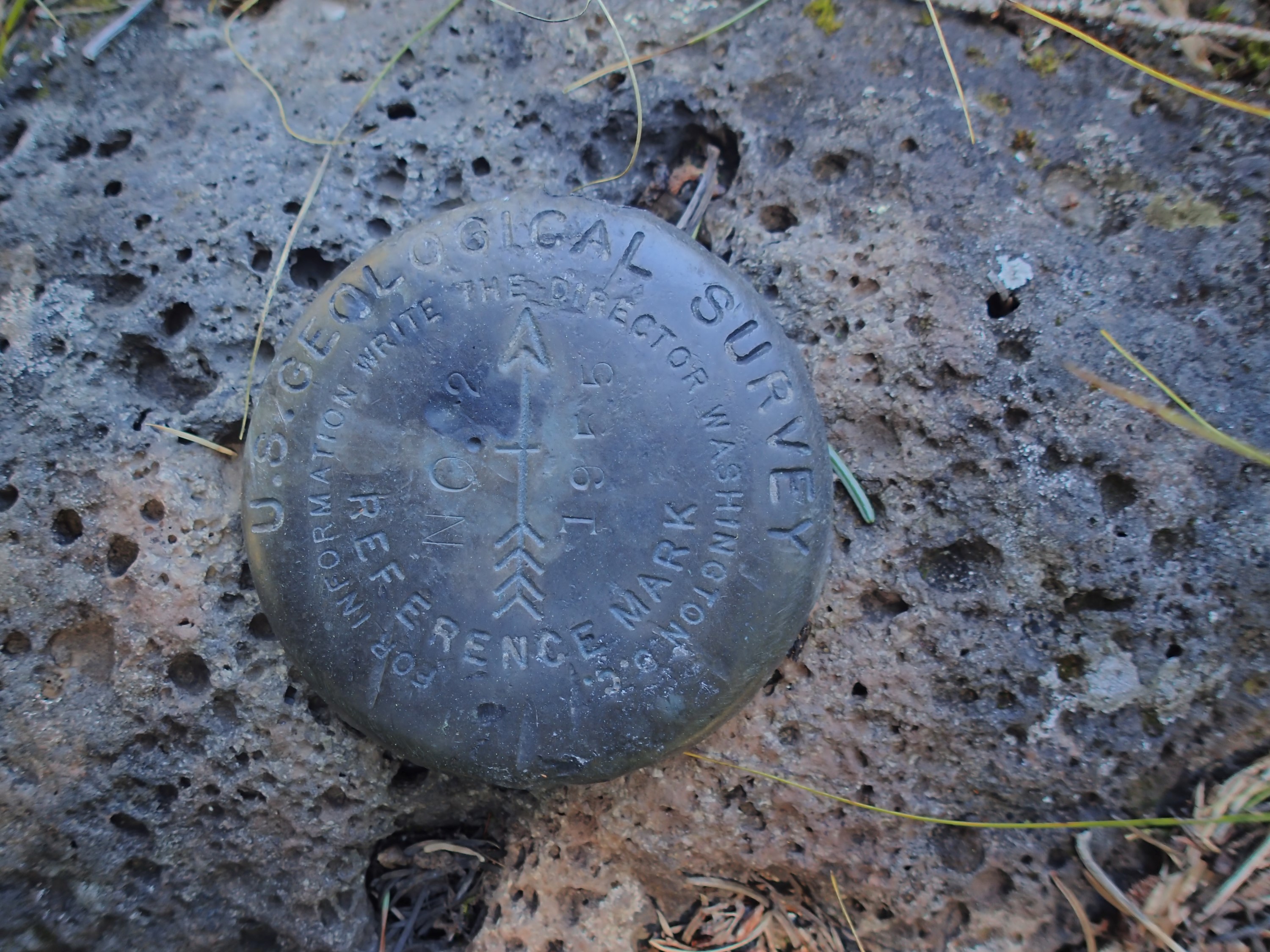 At this point, since I was not going to be able to complete a loop, it was time to turn back. The trail ahead looked pretty good (better than almost all the trail I had followed so far) but I have since read that it gets pretty bad once it starts following the south side of the ridge. It won’t be long until one would have to hike cross-country (no trail) to get here. 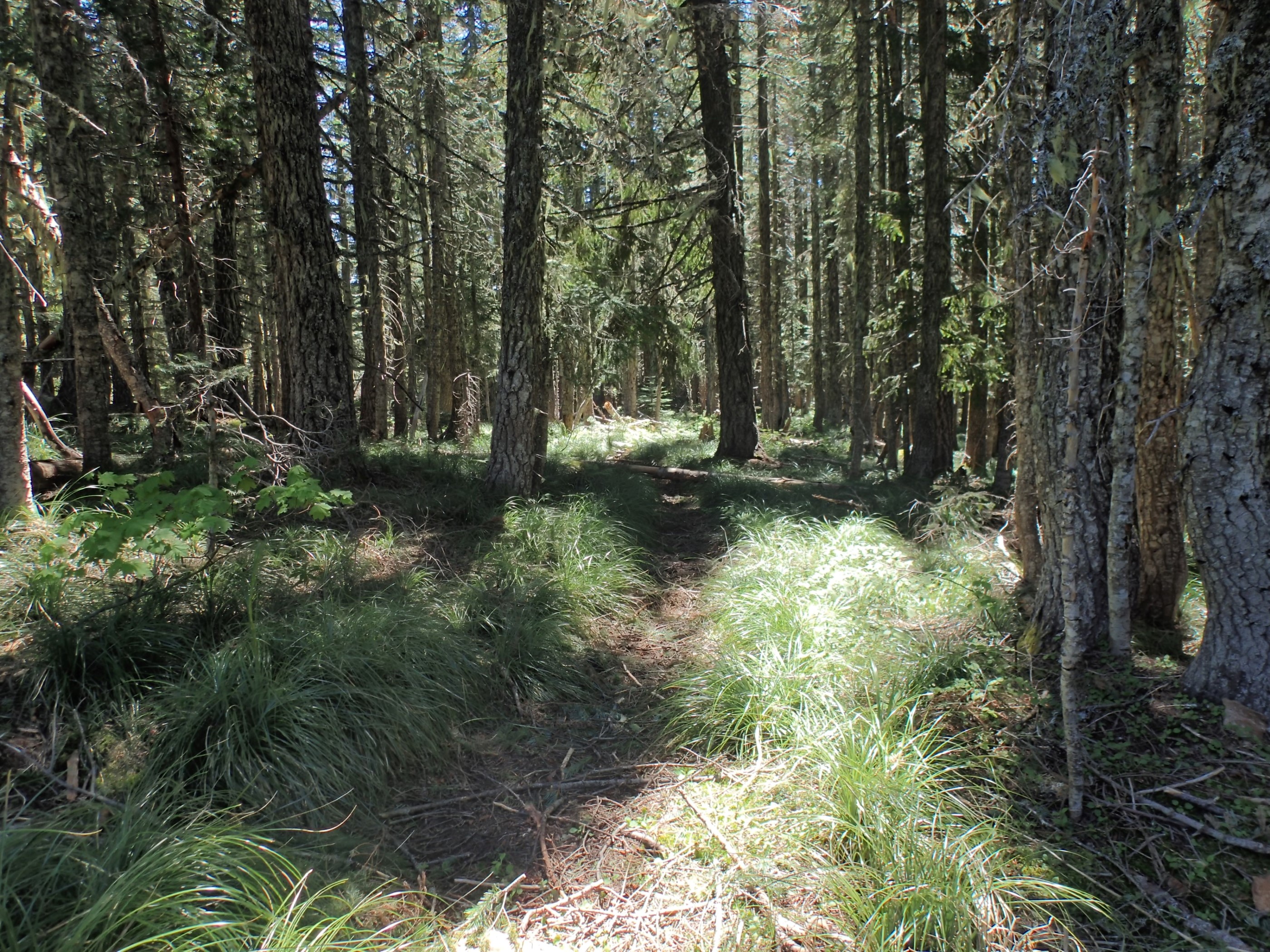 According to the GPS track I covered 11.7 miles in total. However navigational red herrings and slow progress in heavy cover will tend to inflate that number, so I would guess it was closer to 10.5 or 11 miles. Nevertheless it was one of the most demanding hikes I have done in the last few years. I attribute the difficulty both to the 3600′ of elevation gain, and to the fact that the trail is quite hard to find in many places. I have read that this trail used to follow over 40 switchbacks. If I ever return I will definitely make it an over-nighter, both because I wouldn’t want to have to push myself that hard, and because exploring further would require it.

You can download the KMZ file here to view my route in Google Earth.