Hi. My name is Tim and I have had bad knees since I was 16 (patellofemoral pain syndrome). They have deteriorated to the point that my knee specialist has told me that my only option left is total knee replacement. Since I am still relatively young and no one will do the complete replacement yet, pain it is.

In early 2013 I found myself thinking about the ‘glory days’ of my teens, when I went backpacking or camping nearly every month for 7 years in the Boy Scouts. When I was 12 years old I went on a landmark backpacking trip with 2 other scouts and 2 leaders. We hiked the Pacific Crest Trail (PCT) from Dee Wright Observatory south to Waldo Lake. We covered 57 miles in 6 days, including a summit of the Middle Sister. I did it as a 95 lb beanpole of a kid, and I carried 35 lbs of 70’s era gear in an external-frame pack. It was a tall order for a kid my size to carry 1/3 my own weight without even a hip belt, but it turned out to be one of the pinnacle experiences of my life. 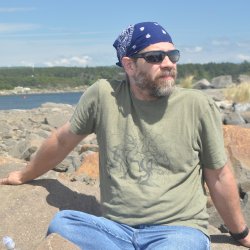 So I decided that I would like to reprise that trip after 35 years. But as I started planning I discovered that there were good reasons to deviate from the original itinerary. Those changes altered where water would be available, which altered where I should camp. I didn’t plan to summit the Middle Sister this time. Once I realized this was going to be a new hike over old ground, I decided to extend it as well. I completed this hike July 29-August 4, 2014. I ended up hiking from Dee Wright Observatory all the way to Hwy 58 (McKenzie Pass to Willamette Pass), a span of 75.5 miles known as Oregon Section E of the PCT. Suddenly, I was a section hiker. I also learned that I truly can hike long distances on these old knees.

In the process of planning that hike I fell in love with the idea of hiking the whole PCT, from Mexico to Canada. This is a much larger goal. At 2,650 miles, I would need to hike 20 miles per day for 134 days. Allowing for the occasional rest day, that means a trip lasting nearly 5 months. Since there is little chance of getting 5 months off from my job, I have concluded that I will just have to stay in 20-miles-per-day shape until I retire. At that time I’ll be free to make the trip, and hopefully I will still be in good enough shape to pull it off. Many people have done it at that age, so I know it’s possible. I’ll just have to use my knees until they fail, and then get new ones if necessary. I won’t let them stop me.

This blog is a record of my efforts to reach that goal.

A Note About My Knees
You are probably wondering how someone with bad knees like me can go backpacking. I know. It seems stupid. But the pain doesn’t limit me in the way you would think. My pain is worst when I stand still or ride as passenger in a car. With less cartilage and poorly shaped joints it is the small continuous vibrations and keeping my legs still that hurt the most, because the irritation of the joint is concentrated in small contact patches. When I move my leg through most of it’s arc, it hurts little as long as I keep everything straight (don’t move and twist at the same time, for instance) because it spreads the irritation and keeps the joint looser. If I am active, careful, and a little bit gentle I find at the end of the day I am sore, but the pain is minimal until late in the day. If I sit around in a nice chair and baby my legs, they are killing me by 10am. Either way, by the time I go to bed it interferes with my sleep without some kind of pain relief, but at least if I am up and active I can enjoy my day, and in the end I feel better despite the pain. So my knees are a very personal incentive to stay healthy and keep moving. The reality is that the motion does cause a small amount of damage however. My knees have an expiration date, and then I will need to replace them. Until then…