Snowpack in the West is at about 5% of normal. Temperatures here in Oregon are higher than they should be. We are already seeing what little snow there is melt away. It’s going to be a dry summer.

Up at Willamette Pass, where there should be feet of snow, there is only inches. Looking for the silver lining, I realized this would be a great opportunity to get out and hike in snowy conditions without needing to use snowshoes. So on April 4th I headed for the pass with the intention of hiking in to Bobby Lake, just off the PCT.

Along the way I caught this dawn picture of Diamond Peak: 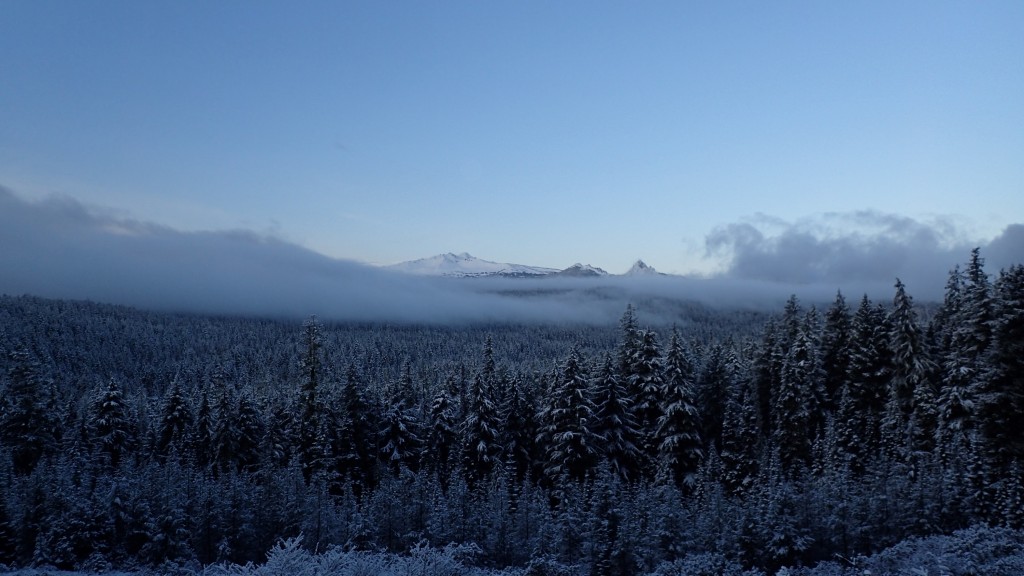 Arriving at the pass I pulled into the Gold Lake sno-park and locked up my little car: 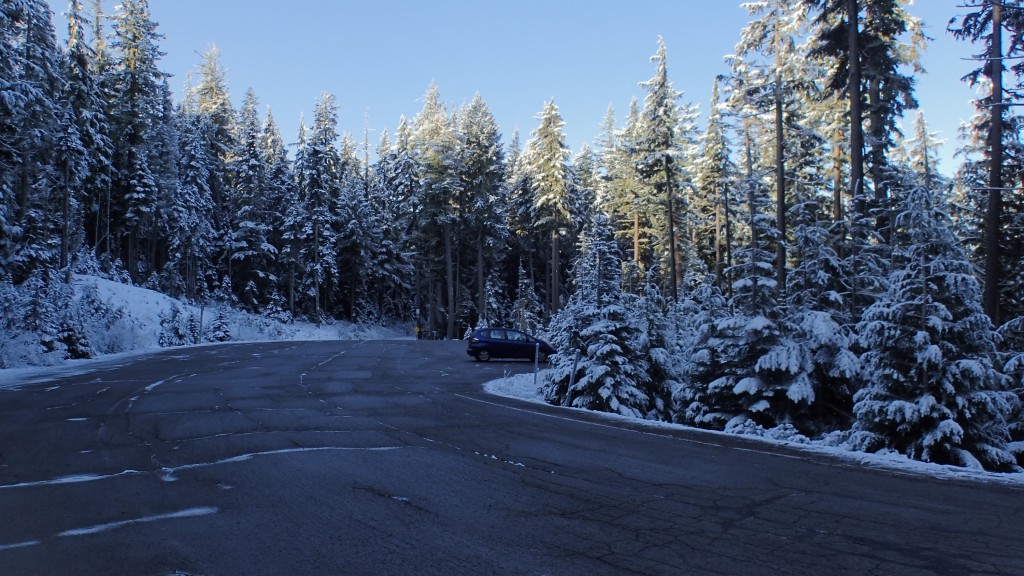 There’s a warming cabin at this sno-park. The lot is designed to be used by people enjoying Nordic sports such as cross-country skiing and snowshoeing: 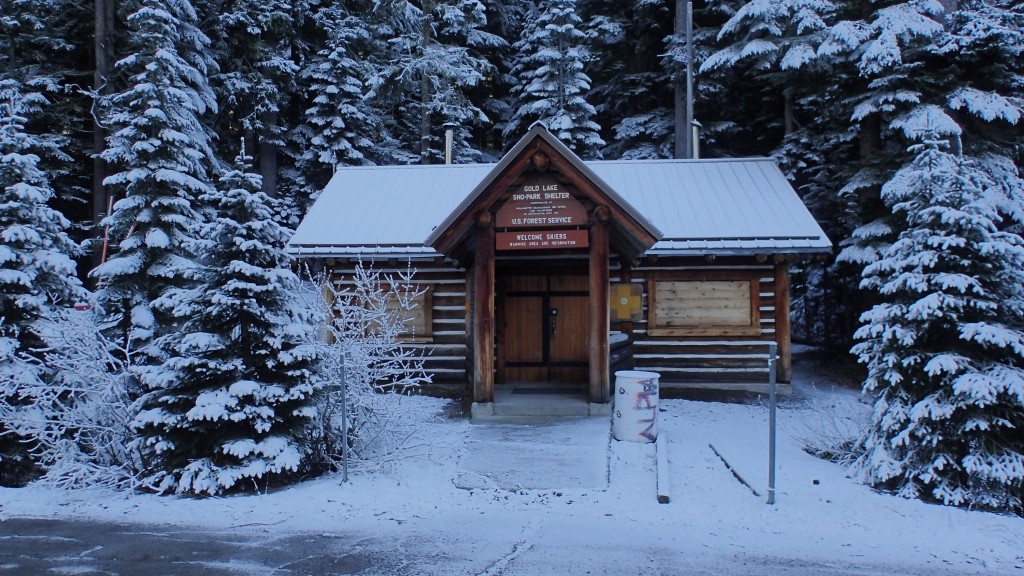 I exited the lot and crossed the highway to reach Gold Lake Road. This road is closed to vehicles right now, but in the summer it leads to a nice campground at Gold Lake. That is my first destination: 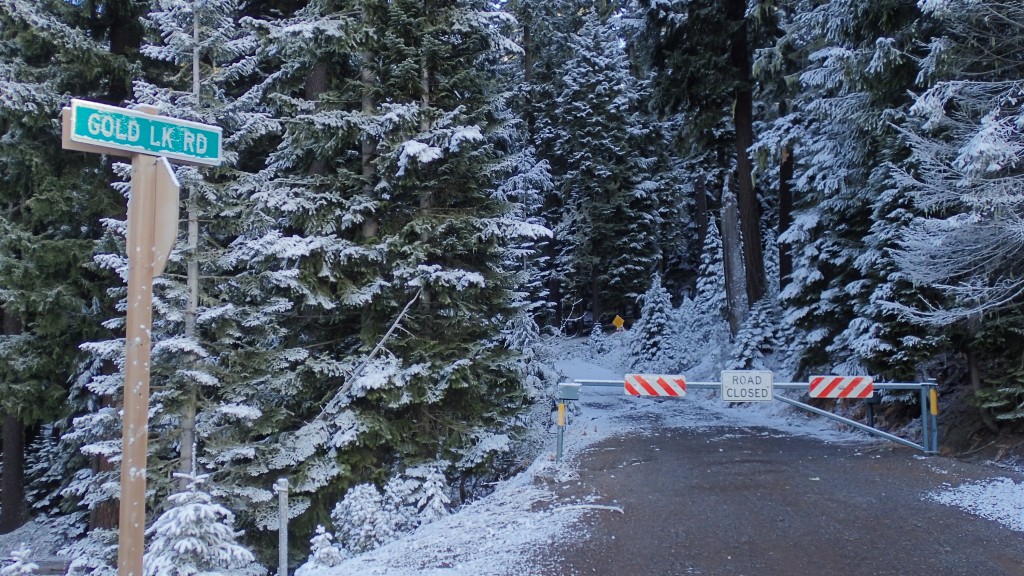 There was just about 1.5″ of snow on the gate. That’s good, because I was headed uphill later and if the snow was too deep up there I wouldn’t reach my goal: 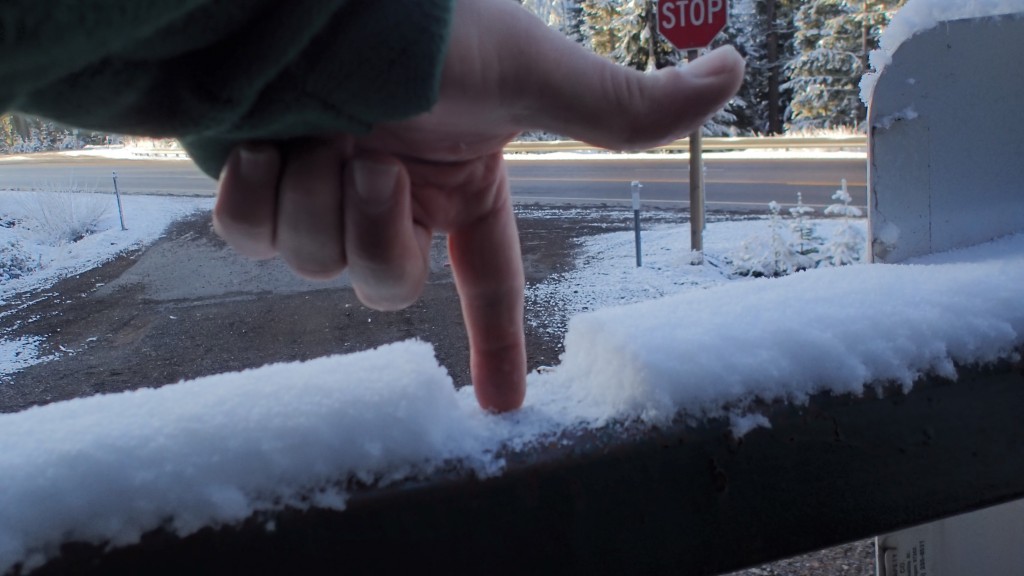 The snow underfoot was a few days old, so it crunched with each step as I headed up the hill: 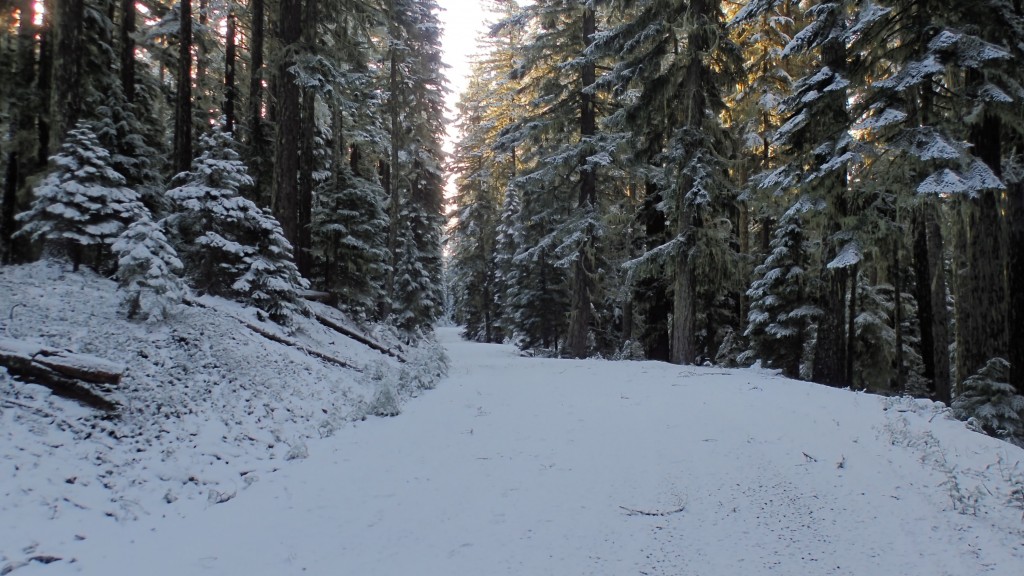 Three trails lead off the left side of this road, all three eventually leading to Gold Lake. Reaching the first of these trailheads 0.5 miles up the road I found that there was no trail in the normal sense. It turns out his first one is for people on skis or snowshoes, and when they normally use it there is several feet of snow. This covers the low brush that is thick and about 4′ feet deep so it isn’t a problem for Nordic sports. But with almost no snow, I couldn’t push my way though the bushes at a reasonable rate. So I hiked on, looking for the second trailhead and hoping it would have an actual trail: 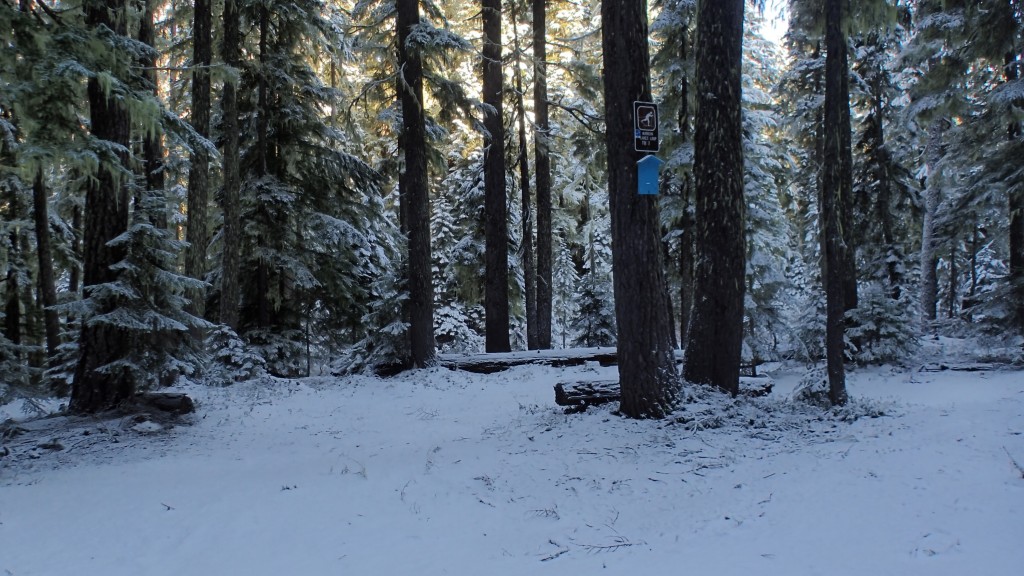 It really was pleasant considering it was a road walk: 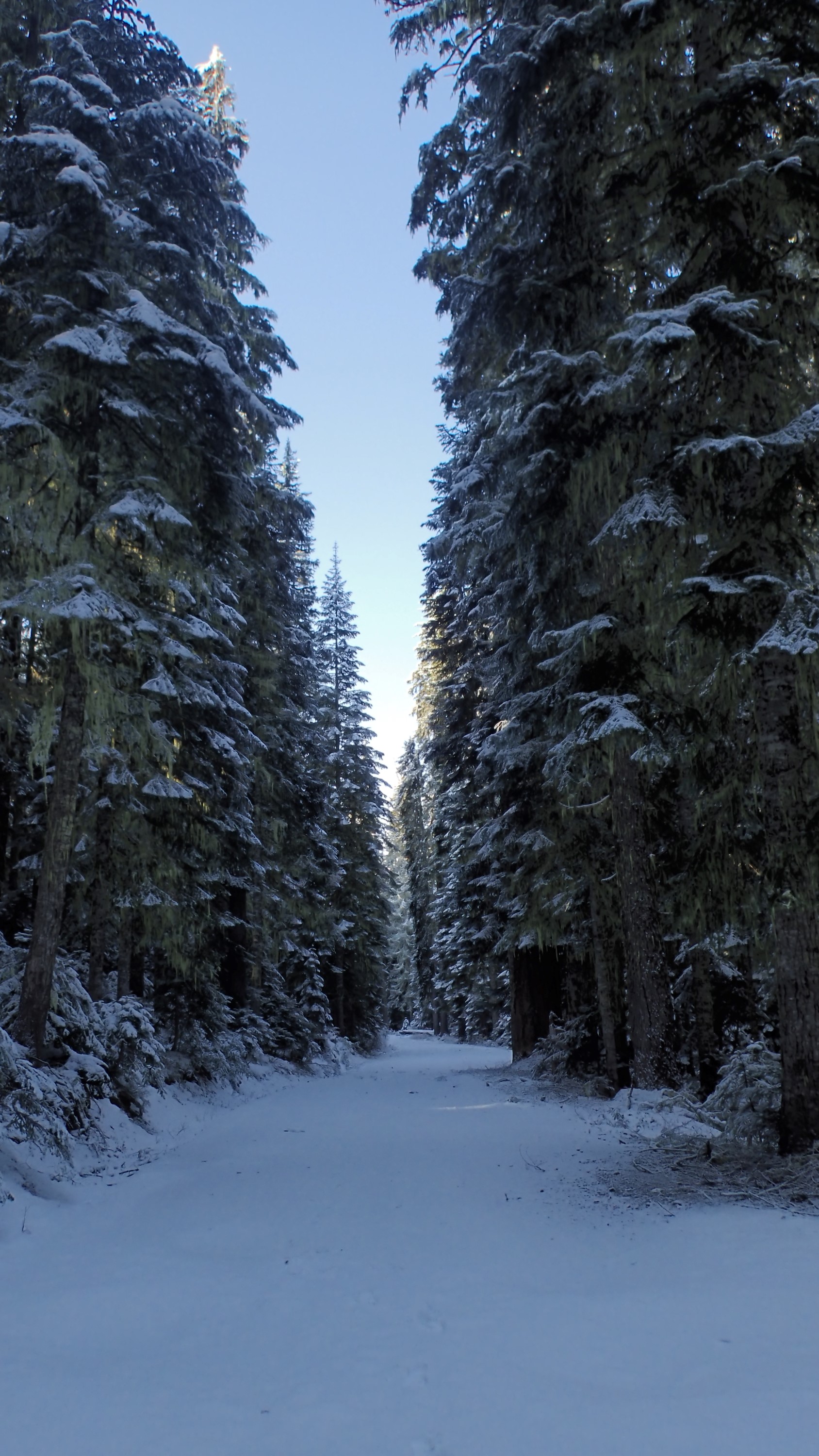 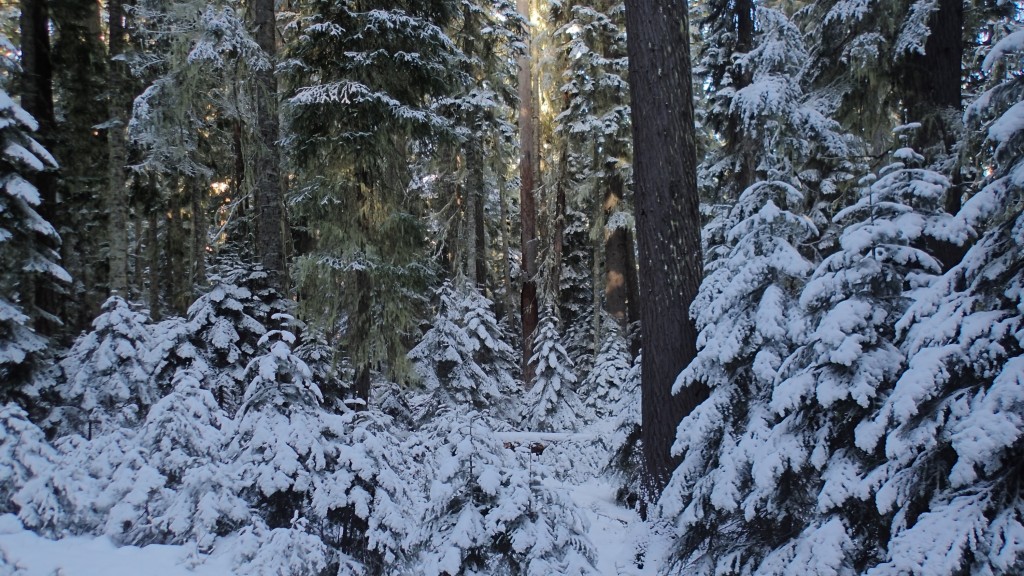 The second trail (about 0.7 miles past the first) actually had a path for me to walk on. In this picture you can see that the trail is marked by a small blue diamond on the tree near the center of the picture. You can also see where the trail is fairly easily based on the obvious gap in the foliage. Later, when the trail was much less obvious, I took advantage of other clues to stay on track, like sawed logs and stumps, and old-style blaze marks cut into the tree trunks along the way. There is no logging out here, so any log or stump that was cut with a saw is a sure sign that it is right next to a trail. The blazes (which I discussed here already) are mostly grown over, so you have to look carefully for trees with puckered bark where the scar is. But as long as the trails were marked with blue diamonds route-finding was cake: 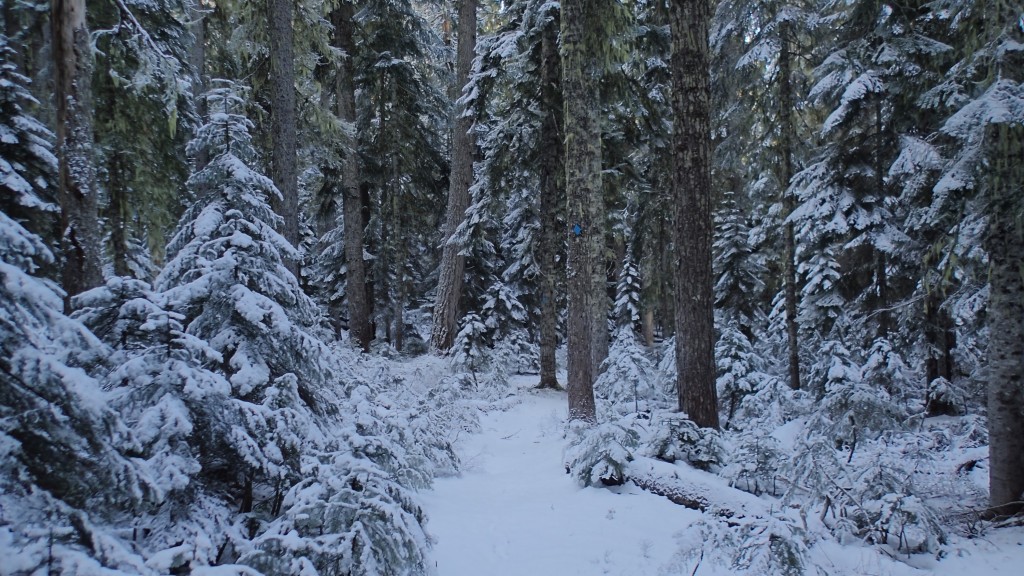 The other thing that happened at this point was that I realized I had not set my GPS to record my track. Doh! So I set the GPS to record and headed up the trail. Very quickly I reached Upper Marilyn Lake. Pretty in the snow: 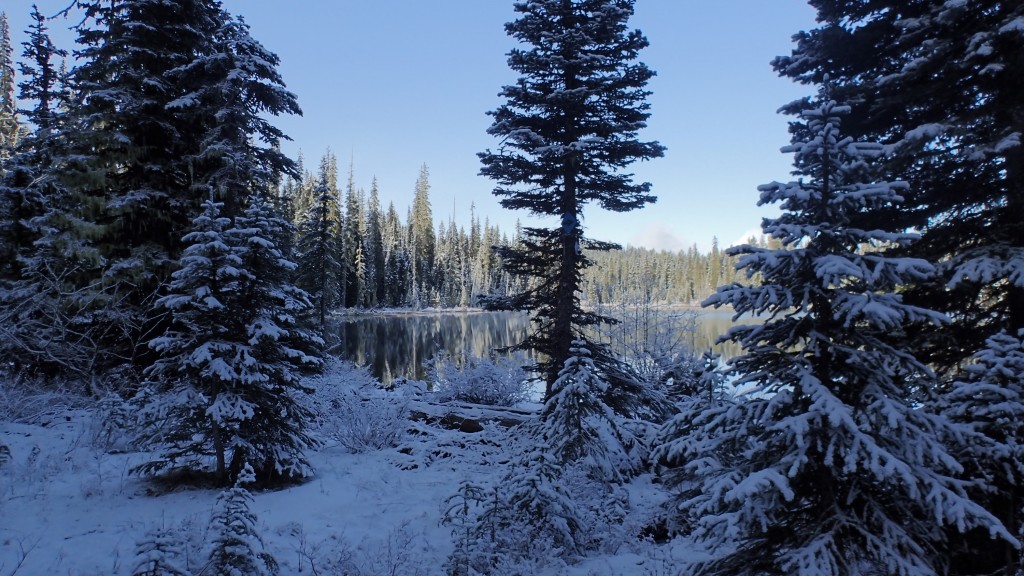 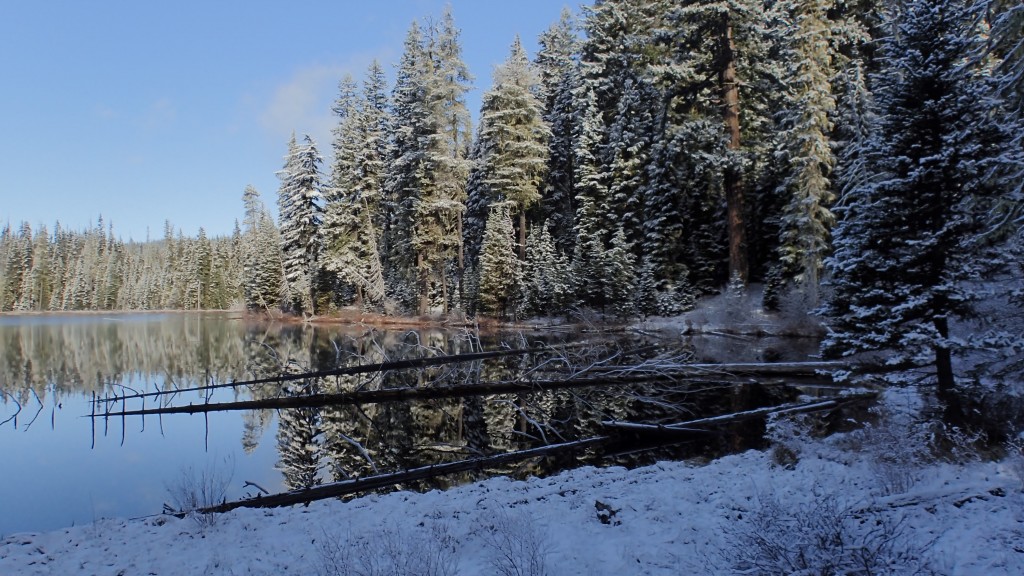 When I walked down closer to the water I noticed that someone set up a memorial here: 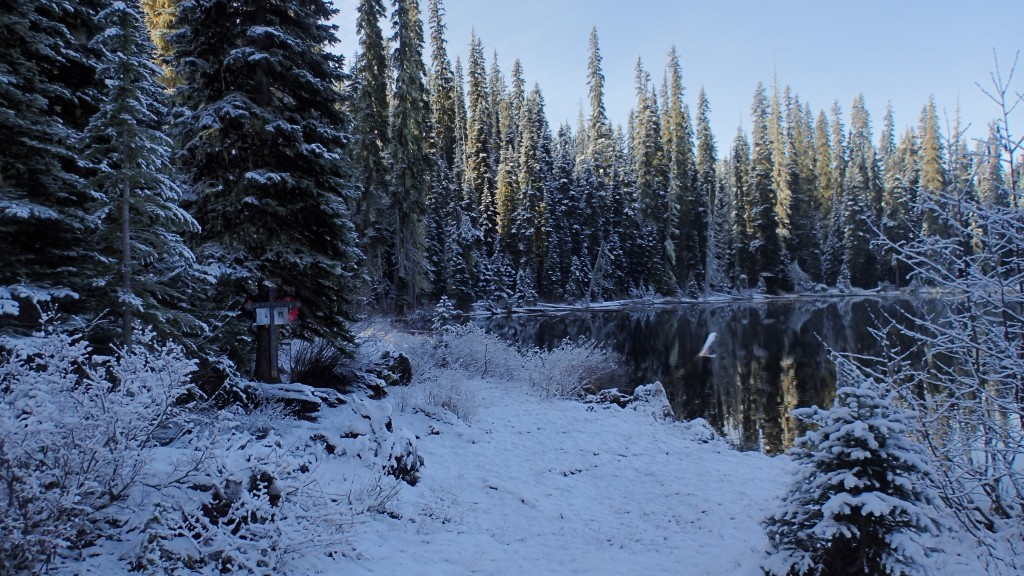 I have mixed feelings about this. On the one hand, it really is a great way to memorialize someone who loved to come up here. On the other hand, it won’t be very wild out here for very long if we allow memorials like this. In thend, I think they should be dismantled after a period of time. Maybe a year or two. This memorial has been adapted for at least two, maybe three people: 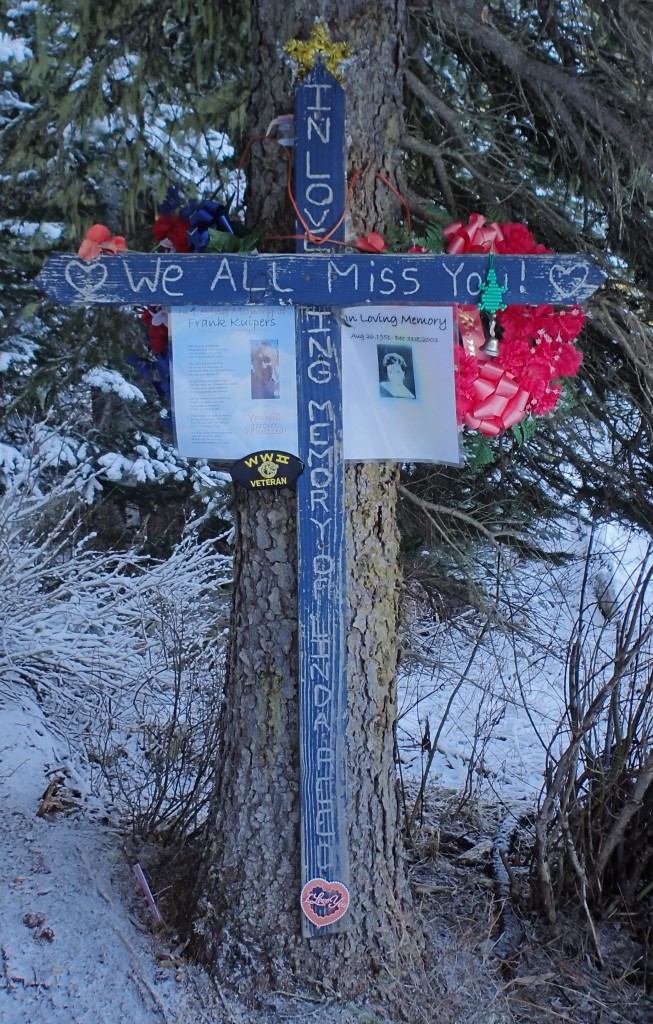 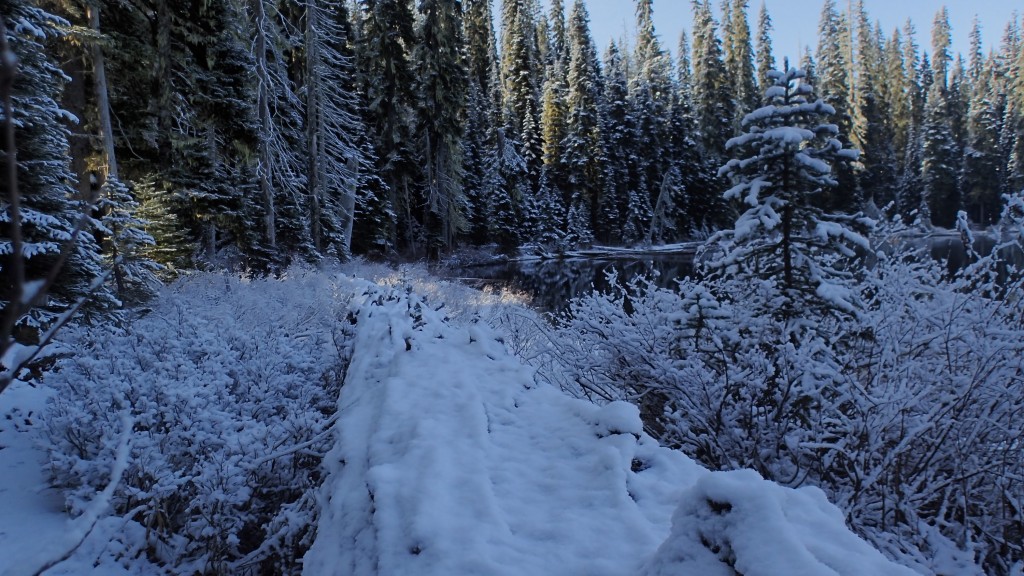