On Saturday, March 15th I went back to Fall Creek. If you remember from the last time I hiked this trail, I only got about 3.5 miles before I lost the trail and could not go on. This was due to poor planning on my part. I had brought a paper map, and I had also uploaded the trail and surrounding topographic data to my GPS. Unfortunately, when I got to the trailhead that morning, I found that the GPS did not have the data I thought I had uploaded, and this trail was just off the edge of my paper map.

This didn’t seem like a big deal at the time, because I was sticking to the trail, and it would be pretty hard to get lost on this one. However, when I got to the burned out area I couldn’t figure out where the trail continued on, so I turned around and headed back. When I got home, I checked, and the trail was just across the road bridge I walked by 3 or 4 times while trying to find the trail. DOH!

So I decided to come back. This time I had a good paper map, verified data on the GPS, and I knew exactly where to go. I started at the same point as before, and re-hiked the same ground as last time, and then continued on from my previous turnaround point. This trail has some uneven tread, but it is relatively flat. The difference between the highest point and the lowest point on the trail is less that 250 feet of elevation. And since the trail goes on for some 13 miles, it made for a perfect high-mileage workout for my feet and legs. This time, instead of about 7 miles round-trip, the total mileage was 16.48 miles. I rocked it, averaging 2.6 mph over 6 hours and 21 minutes of moving time.

Although I did longer days when I was a teenager, that’s the longest single day I have done in 30 years. Boo-yah!

This time I completely ditched the Lowa Renegade GTX boots I have been wearing. If you recall, they have been grinding my feet to burger on recent hikes, as I just can’t seem to get the right combination of insole and lacing needed to get my feet to stay in place in the boots. This time, instead, I wore a beat up old pair of cheap Walmart boots I have used for a few years. Then just to test a theory, I changed from my boots to a cheap pair of tennis shoes (also from Walmart) at the 8.25 mile turnaround point. My feet and legs are sore, but not like they would have been in the Lowas. And it reinforces my opinion that with the lighter pack I am carrying these days some good trail runners are all I need in dry weather. The Lowas are now on the back shelf until I can work out the problems with them.

I didn’t take many pictures on the first 3.5 miles this time, because I already posted 46 pictures of that section last time. I did take this picture, which is very much like one I took last outing here, but for some reason I find this bit of trail very appealing. This is right before the burn area. You can actually see some of the dead snags left by the fire on the right side of the creek just ahead: 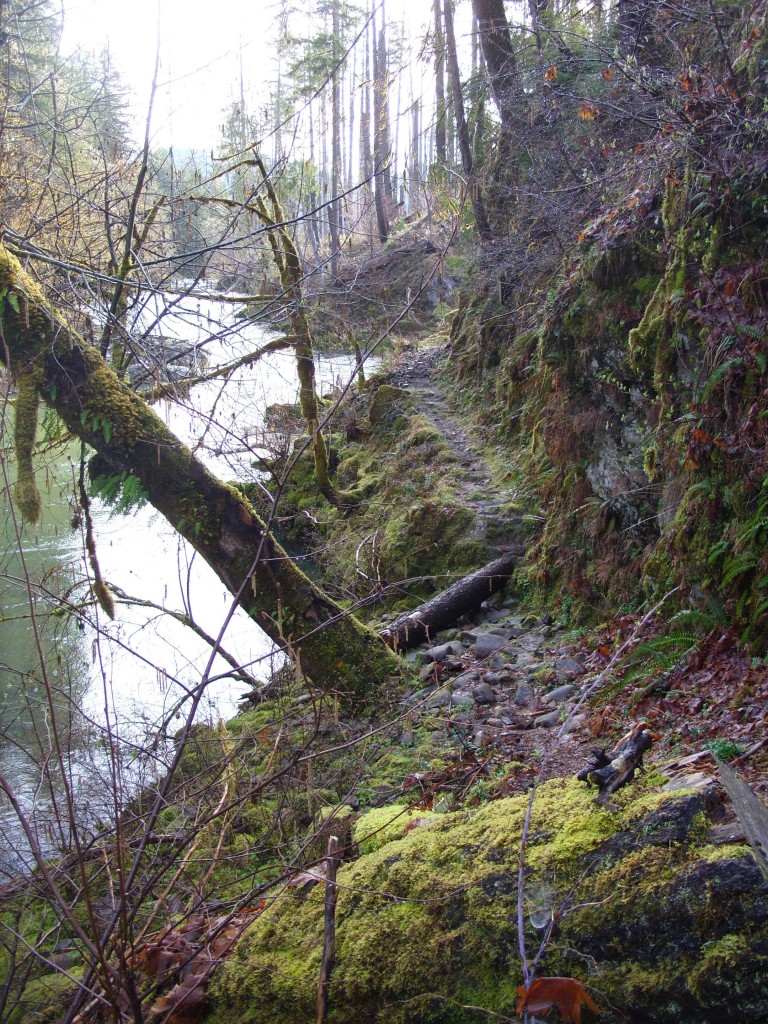 The pictures then start up just past the bridge that stymied my progress last time. You can see that the burned area has few live trees, and the underbrush is very different than what it was before the fire: 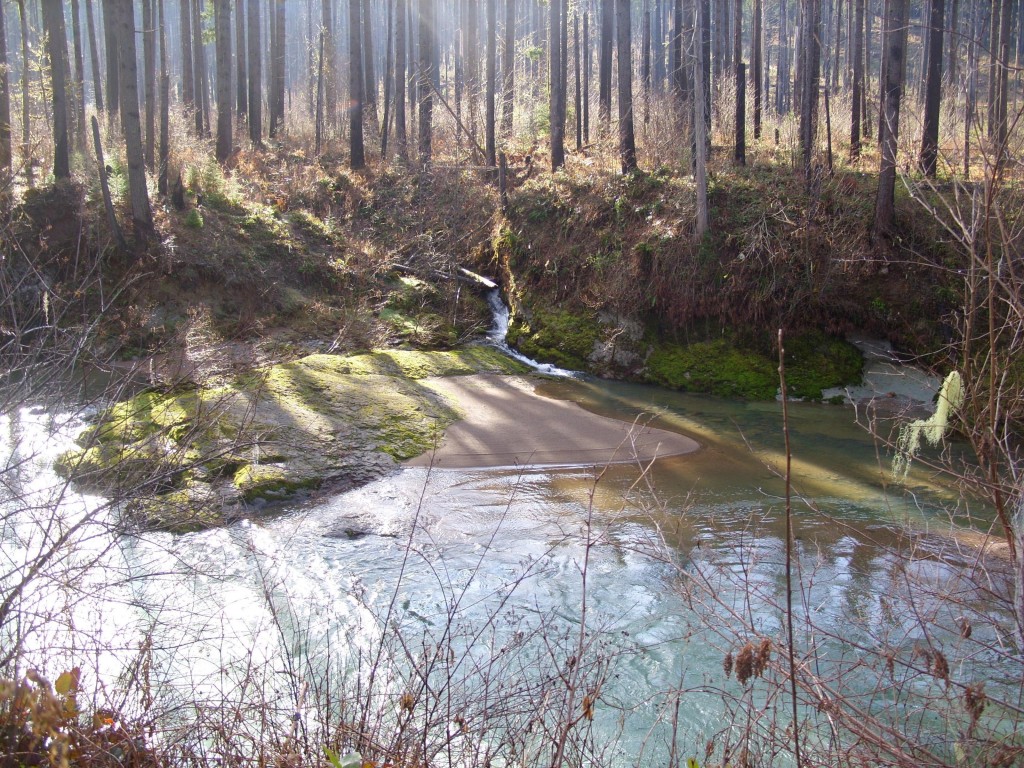 In the un-burned areas, there is a dense canopy of Douglas Fir trees providing almost complete shade. This leads to a lot of lush shade-loving growth like ferns, salal, Oregon Grape, and moss growing densely absolutely everywhere. However, where the fire has killed off the large trees there is no canopy, and the only shade is cast by the 20-50 foot tall stumps of dead trees. This leads to a lot of grasses and shrubs that would not otherwise survive here, and absolutely none of the shade loving plants and mosses. Very little of this new foliage is evergreen, so this early in the spring everything looks dead: 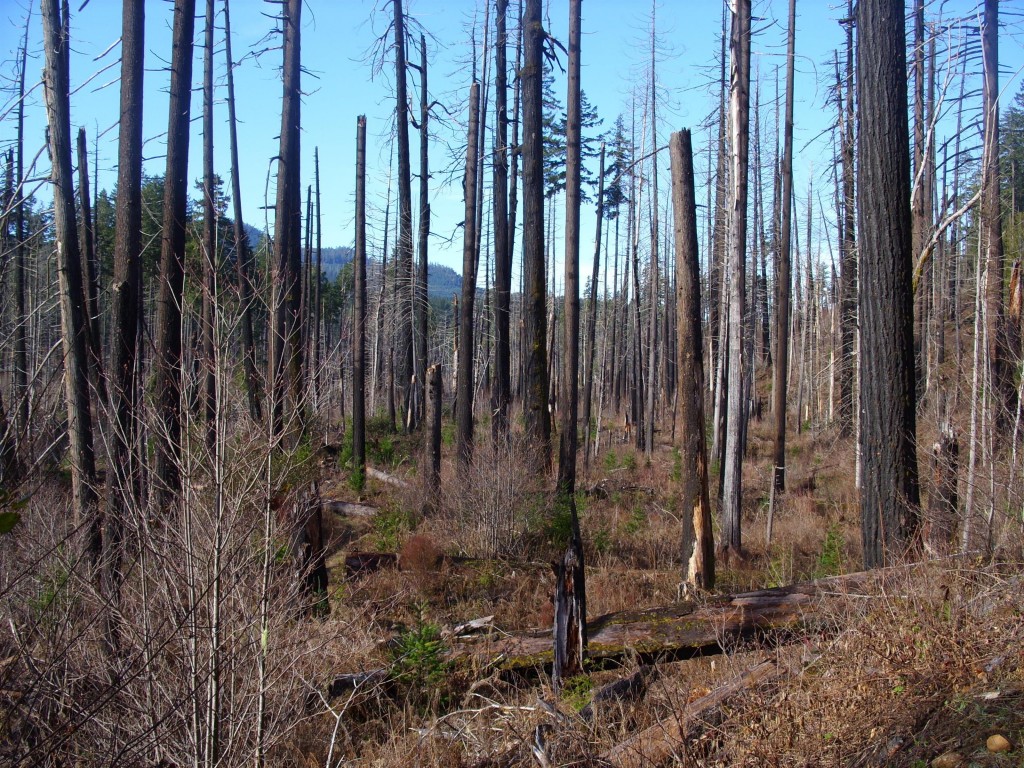 At this point there was an island in the middle of the creek. If you look carefully, you can see that the water flows left-to-right behind that dark mass of lava rock, as well as in the foreground:

Although the vast majority of the trees in the burn area are dead, some of them managed to stay alive, and all of the green growth is at the very top: 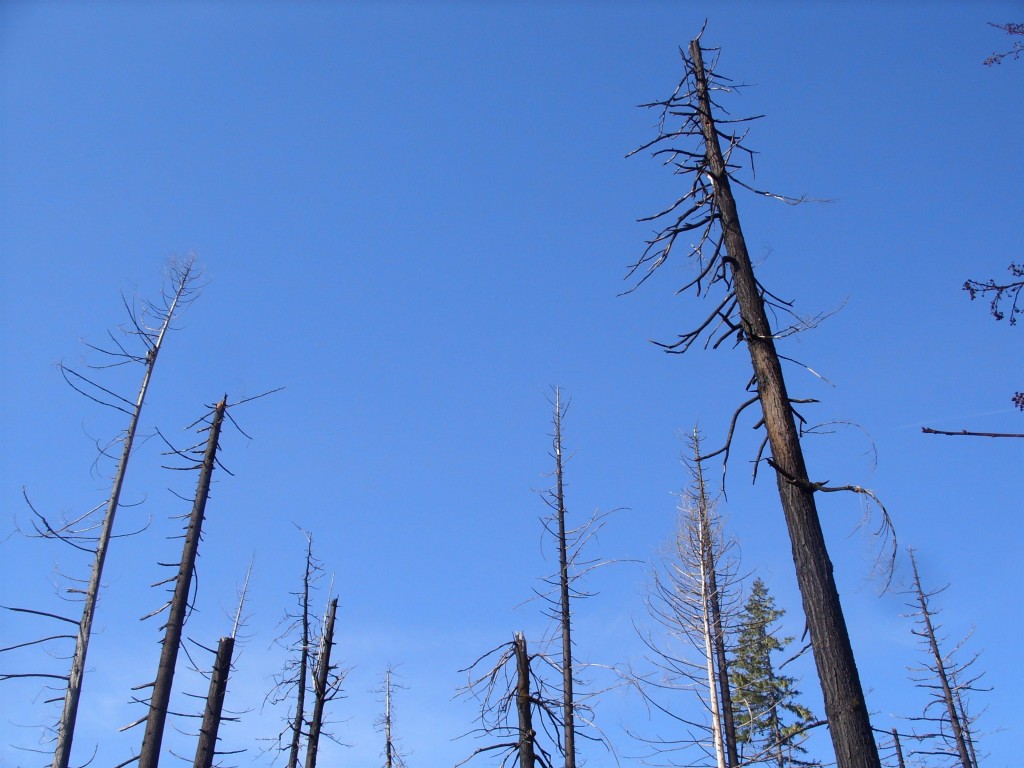 A little way past the road bridge is Slick Rock Creek, and just up the hill from there is a shallow cave. It’s more of a handy overhang than anything. I understand that Native Americans used this as a camp location while hunting in the area. It’s just behind that ‘pillar’ of lava rock there: 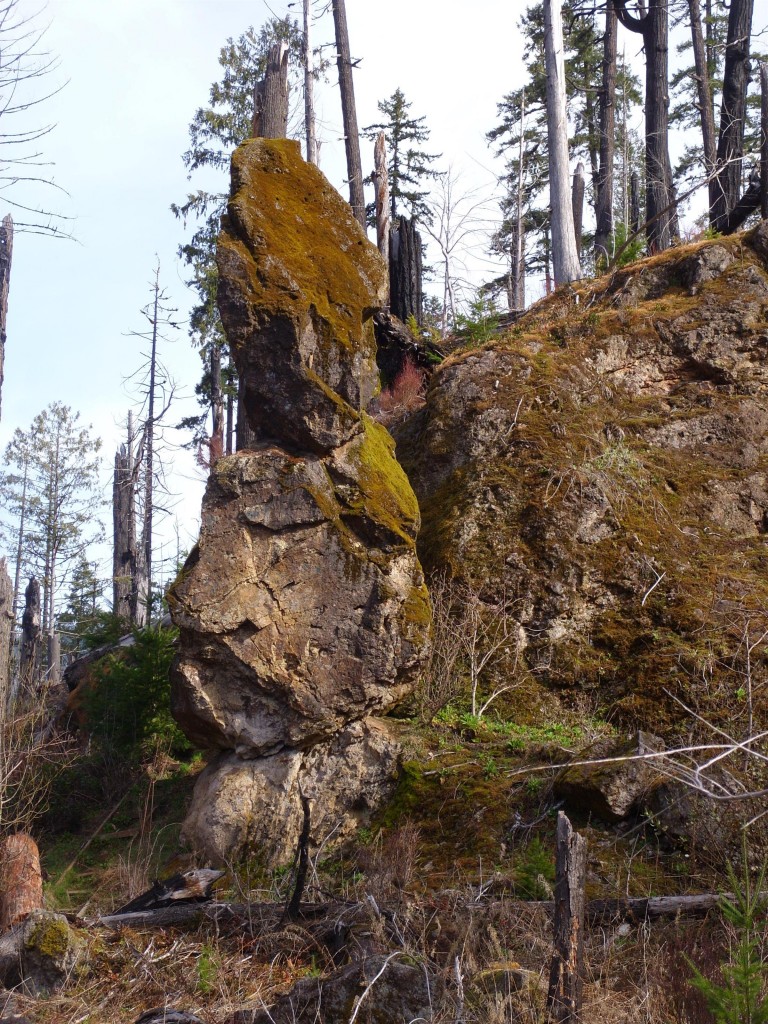 There are steps to help get up the steep part of the hill, but they are in pretty bad shape. Nature is hard on anything humans build out there: 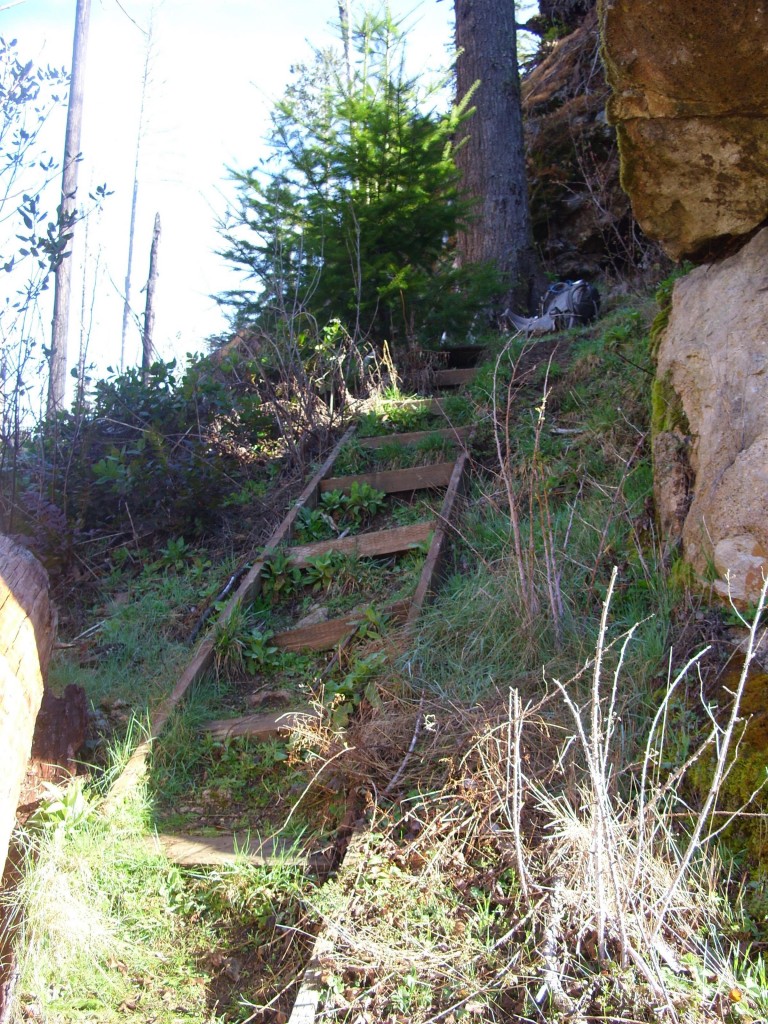 The ‘cave’ is just big enough for a fire pit and a spot where a couple of people could comfortably sleep. Someone has left their walking stick behind: 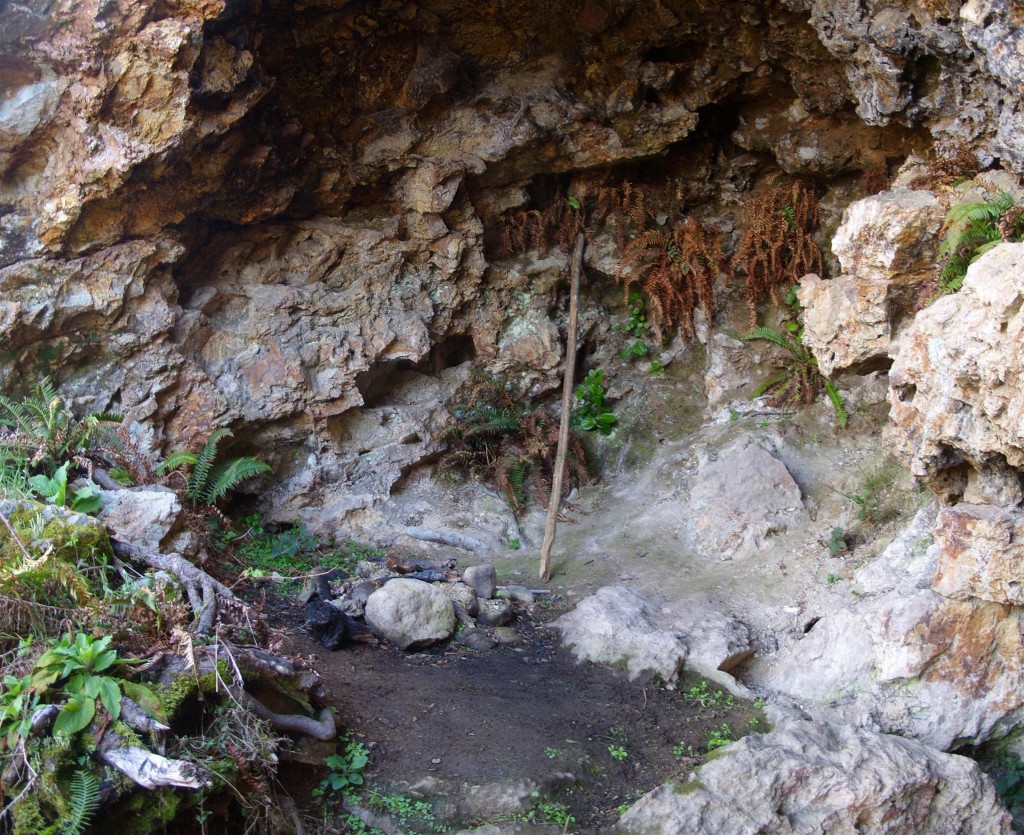 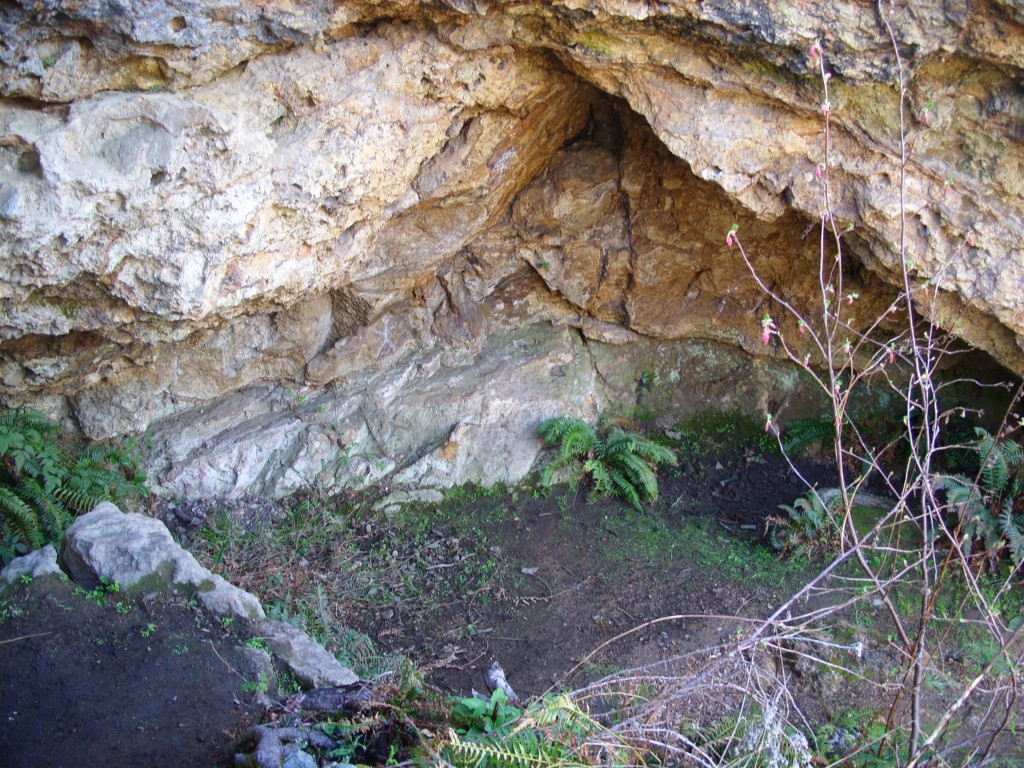 The view from the cave would have been much nicer before the fire: